2010 Outlook of What CFOs Expect

by Joyce White January/February 2010
The following article explores the results of the 12th annual survey of mid-size and large U.S. manufacturing company CFOs commissioned by Bank of America Business Capital. Phone interviews were conducted from mid-August to mid-October 2009.

The key message from this year’s survey results is that while CFOs gave the current state of the U.S. economy its lowest score in the survey’s history, they are optimistic about the outlook for the economy. Two-thirds of manufacturing company CFOs surveyed said they expect the economy to expand in 2010, and almost 60% said they expect the manufacturing sector to grow. Both of those responses were much higher than in last year’s survey. Despite that optimism, a slight majority said their companies have delayed or canceled expansion plans.

Many CFOs may just have a wait-and-see attitude. They see positive signs for the economy and for manufacturing, but they may need to see more concrete results before committing to expansion themselves.

Sixty-two percent of the manufacturing company CFOs surveyed report that they have no plans to change the size of their labor force in 2010. Of the remaining CFOs surveyed, 28% will be making additions to staff and 9% will be laying off employees.

For the first time in three years, most U.S. manufacturing company CFOs are predicting that their labor costs and product pricing will remain constant in 2010 (45% and 51% respectively). Only 37% of CFOs predict their labor costs will increase in 2010, significantly lower than the 56% reported last year.

In the survey, CFOs reported little change in their borrowing needs for 2010. About half of the CFOs surveyed expect their cost of capital to increase, compared with about one-quarter two years ago. Even so, there was an increase in CFOs who said they are considering financing in 2010, and more than half said that credit availability over the past year has stayed the same.

The Economy
Despite giving the current economy low marks, chief financial executives at U.S. manufacturing companies are more optimistic than in recent years about the nation’s economic outlook.

Sixty-six percent of CFOs believe the national economy will expand in 2010, more than double (31%) that cited expansion in last year’s survey. There are no significant differences in the economic outlook by region or type of company, however, in terms of sales size, manufacturing companies with revenues between $200 million and $499 million are significantly more likely (76%) to predict economic expansion than smaller manufacturers with revenues between $25 million and $74 million (64%). (See Exhibit 1.) 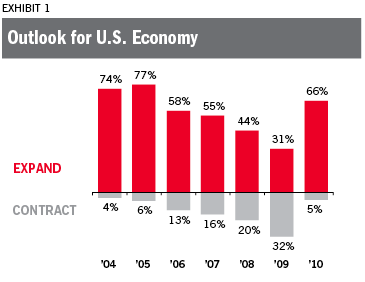 For the second consecutive year, manufacturing company CFOs have a negative view of the U.S. economy, giving it an average score of “44” on a scale ranging from 0 (extremely weak) to 100 (extremely strong). This represents a decline compared to last year’s score of “46” and is the lowest score recorded for this measure since the survey began.

Only 29% of CFOs rate the current state of the U.S. economy above the “50” midpoint, significantly lower than the 35% rating reported in the 2009 CFO Outlook. This negative view is consistent across all companies regardless of census region, revenue size and whether the company is publicly or privately owned.

CFOs are equally critical of the world economy giving it an average score of “46.” This represents a significant decline from last year’s score of “53,” and marks the first time ever in the history of the survey that U.S. manufacturers have a negative view of the world’s economic affairs. (See Exhibit 2.) 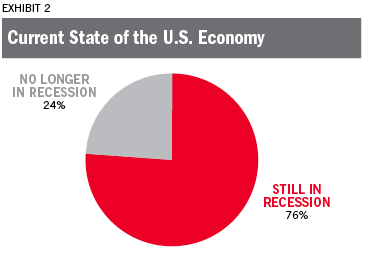 Manufacturing Sector
Manufacturing company CFOs are the most critical of their own industry at this point in time. They give the manufacturing sector an average score of “40,” which is a ten-point drop from 2008 and the lowest level ever in the history of the CFO Outlook.

Yet 59% expect the manufacturing sector to expand in 2010 — more than double the 25% a year ago. After six years of waning optimism, this marks a return to 2004 levels, when manufacturers held positive views about their industry. Of the remaining companies, 30% believe the industry will remain the same in 2010 and 11% think it will contract. Companies in the Midwest are more optimistic (63%) about industry expansion than manufacturers in all other regions. (See Exhibit 3.) 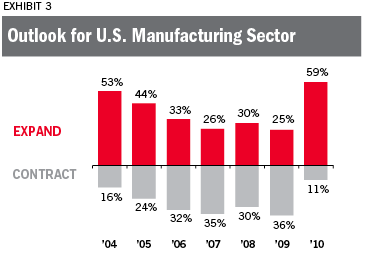 In addition, 61% of CFOs expect revenue growth in 2010, up from 50% last year. Regionally, CFOs in the Northeast (64%) and Midwest (63%) are directionally more likely than those in the South and West (57%) to be projecting revenue growth. Likewise, revenue expectations are the most optimistic among large companies (66% for companies with revenues between $200 million and $499 million, and 69% for companies with revenues between $500 million and $2 billion). Finally, companies expecting sales to foreign markets to increase (72%) and businesses expecting M&A activity (68%) are both expecting above-average revenue growth in 2010. (See Exhibit 4.) 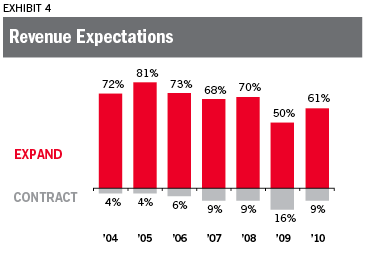 Fed Actions
While the global recession has tested many companies, the survey responses show that most CFOs now anticipate growth in 2010. Conditions may still be challenging for some businesses, but the broader view is much more optimistic than a year ago.

In December 2008, the Federal Reserve Board lowered the overnight federal funds rate to near zero and has kept it there since. Given that interest rates have remained unusually low for this extended period of time, it is not surprising that 88% of manufacturing company CFOs believe the actions taken by the Fed over the past year have helped the U.S. economy. This represents a significant increase for this measure since last year’s survey (64%). (See Exhibit 5.) 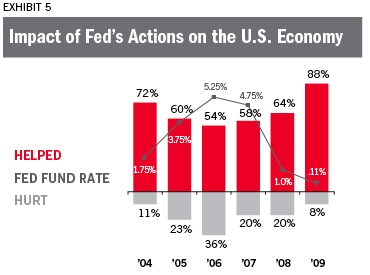 Expansion Plans
Unlike last year when more than half (52%) of all manufacturing company CFOs reported that the economy had no impact on their growth plans, the length and severity of the recession have certainly changed all that. Currently, more than half of all CFOs surveyed report that current economic conditions have caused them to delay or cancel their plans for growth or expansion (46% delay, 10% cancel). This represents a significant jump from 38% in the 2009 CFO Outlook and is the highest ever recorded for this measure.

The percentage of CFOs who intend to accelerate their growth plans as a result of economic conditions dropped again this year and is currently only 8%. The only subgroup reporting above-average growth plans (16%) are those that are expecting M&A activity in 2010.

Among those CFOs who are delaying their expansion plans, the primary reason is financial market conditions (88%), a category, which includes factors such as poor sales performance (66%), uncertainty of future (19%) and the weak economy (17%). The credit market (26%) is a secondary reason for altering growth plans. (See Exhibit 6.) 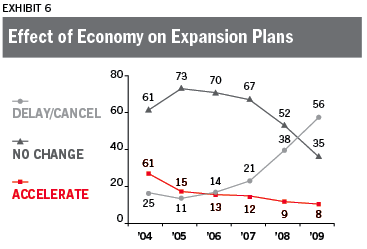 Cost Concerns
For the first time in many years, the cost of materials and energy costs are not the primary financial concerns of manufacturing company CFOs. Instead, CFOs report that revenue growth (49%), cash flow (45%) and healthcare costs (41%) are their biggest financial concerns in 2010.

The financial concerns of U.S. manufacturing company CFOs do vary by geographic region. For instance, companies in the South are significantly more concerned about the cost of materials (43%) and energy costs (33%) than businesses in the West (30% and 20%, respectively). Healthcare costs are a significantly greater concern to CFOs in the Midwest (46%) than in the West (32%). Finally, credit availability concerns companies in the Midwest (38%) significantly more than those in the Northeast (27%). 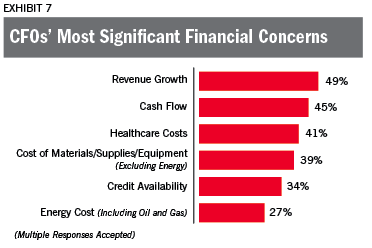 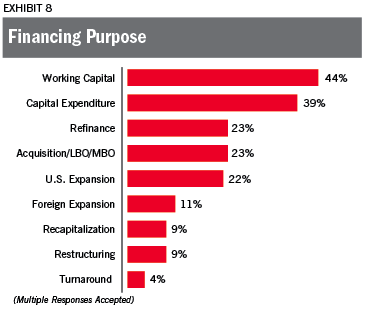 For the first time in three years, most U.S. manufacturing company CFOs are predicting that their labor costs and product pricing will remain constant in 2010 (45% and 51% respectively). Only 37% of CFOs predict their labor costs will increase in 2010, significantly lower than the 56% reported last year. Likewise, only 36% of manufacturers think prices for their products will increase in 2010 (down significantly from the 69% reported in the 2009 CFO Outlook).

Labor Costs
The subgroups expecting above-average increases in labor costs or product pricing next year are: 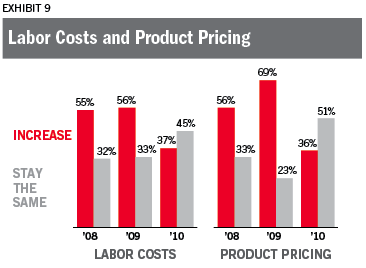 The results of the Bank of America Business Capital 2010 CFO Outlook illustrate that manufacturers are cautious and this is reflected in their business practices. Although manufacturers are clearly concerned about the future of the U.S. economy, this year’s survey shows that they continue to believe in the ability of the marketplace to weather the storm.

Joyce White is the president of Bank of America Business Capital. To download the entire report, visit: www.bankofamerica.com/businesscapital24.