by Rita Garwood Monitor 100 2021
The impact of the COVID-19 pandemic is evident in this year’s Monitor 100. Although net assets and volume declined year over year, forecasts predict a full recovery by year-end, with portfolios and originations expected to increase 5.3% and 10.8%, respectively. Despite a tumultuous year, John Deere Financial claimed the volume crown and rose to runner-up in the portfolio ranking.

Despite the disruption caused by the global COVID-19 pandemic, the group demonstrated resiliency, with portfolios dropping a mere 0.8% from 2019. Sixty-nine companies reported portfolio gains totaling nearly $17 billion, while 31 posted collective declines of $21.1 billion, yielding an overall decline of nearly $4.2 billion among all 100 companies. Although Bank of America Leasing maintained its No. 1 spot, John Deere Financial rose to the runner-up position with a portfolio of nearly $43 billion.

The impact of the year 2020 is clearly demonstrated in the new business volume ranking. The group reported a collective decline in originations of nearly $20.6 billion (-9.3%), with 47 companies combining to achieve increases in new business volume of $7.3 billion and 53 posting a collective decline totaling $27.9 billion. John Deere Financial reported nearly $17.6 billion in 2020 volume, up 2.9% from 2019, to claim the volume crown from Bank of America Leasing.

Although this year’s Monitor 100 reflects the end of 2020, much has happened since, particularly the rollout of vaccines and subsequent lifting of lockdowns. As a result, U.S. Q2/21 GDP is expected to surpass pre-pandemic levels, according to the July Monthly Outlook by Wells Fargo’s Securities Economics Group. The report also noted that approximately 70% of U.S. jobs lost during the earlier stages of the pandemic have been regained and federal aid has improved household cash flow while businesses are “spending robustly” on new investments. However, the supply side has struggled to keep up and inflation has reached “levels not seen in years,” according to the report.

The July 2021 edition of the Federal Reserve’s Beige Book underscores the economic rebound, noting “moderate to robust” growth recently. The Fed noted that employment continued to demonstrate gains in all districts at varying degrees and that wages have increased moderately, while low-wage employees have received increases in pay.

Fourteen new companies joined the Monitor 100 this year. Dallas, TX-based Trinity Industries Leasing, led by Brian Madison, joined the ranking at No. 23 with a portfolio of $7,442.2 million. New York City-based JA Mitsui Leasing USA, led by Kiyoshi Doi, made its debut at No. 55 with $1,164.8 million in net assets. Westport, CT-based Encina Equipment Finance, led by Rick Matte, entered the fray at No. 74 with a $512.4 million portfolio.

In addition, Manhattan, KS-based Baystone Government Finance/KS StateBank, led by Evan Howe, landed at No. 93 with its portfolio of $261 million. Coming in at No. 97 is Cincinnati, OH-based Verdant Commercial Capital, led by Mike Rooney, with net assets of $238.9 million. Plainview, NY-based Macrolease, led by Paul Vecker, made the cut at No. 100 with a portfolio of $180.2 million.

Boeing Capital and Sirius Financial Services rejoined the ranking at No. 43 and No. 88, respectively.

Three companies also ascended from the Monitor 101+ to join the Monitor 100. Troy, MI-based Crestmark Vendor Finance, led by Larry Pearce, rose to No. 91 from No. 104 on the power of an 85% year-over-year portfolio increase. Norwalk, CT-based North Mill Equipment Finance, led by David C. Lee, jumped from No. 103 to No. 92 thanks to a 67% gain in net assets. Similarly, Bannockburn, IL-based Byline Financial Group, led by Lyndon Thompson, broke into the Monitor 100 after achieving a 27.5% year-over-year increase.

Finally, the net assets of 36th Street Capital, which ranked No. 100 last year with a portfolio of $180 million, were not enough to make the Monitor 100 this year. Stayed tuned to see where 36th Street ends up in this year’s Monitor 101+. 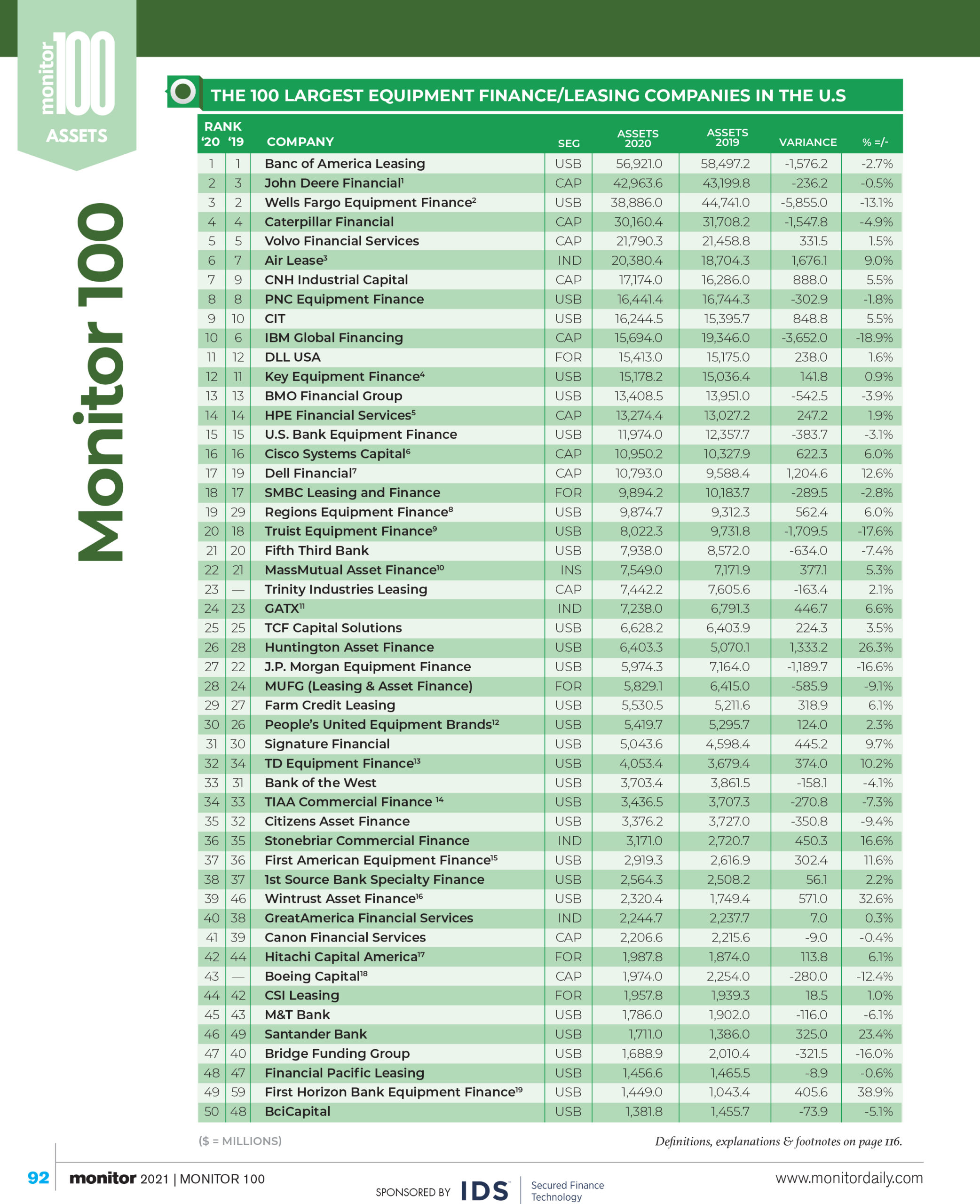 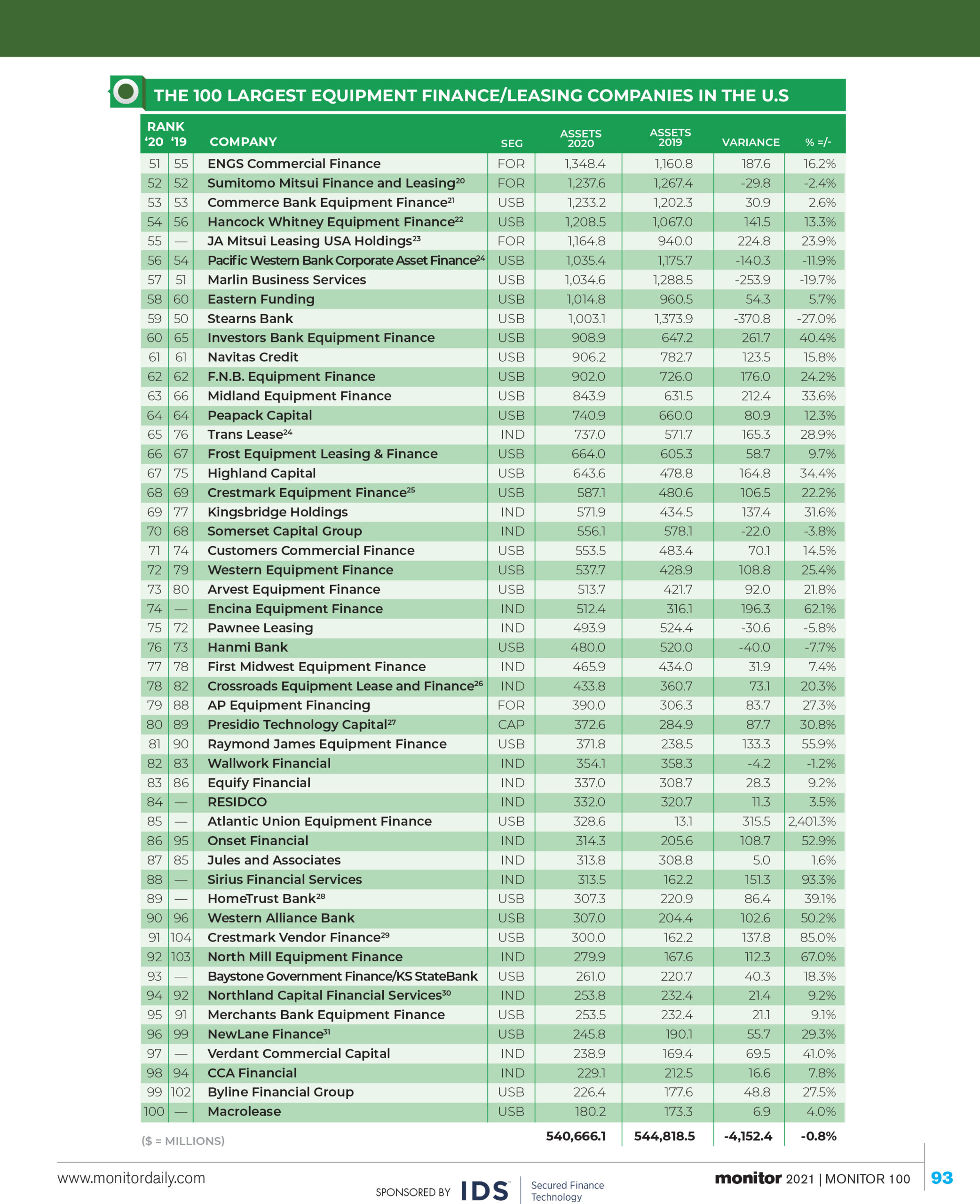 The U.S. Bank Affiliates’ share of the collective Monitor 100 portfolio declined to 51.7%, with 57 companies reporting combined net assets of $279.3 billion, up 0.2% from $278.7 billion last year. Thirty-nine banks expanded their portfolios by a combined $13.2 billion, while 18 experienced combined portfolio shrinkage of nearly $12.6 billion, resulting in a net gain of $592.8 million for the group in 2020.

Meanwhile, the Captives expanded their share of the Monitor 100 portfolio pie to 32.3%, up from 30.9% last year, with 12 companies amassing a collective portfolio of nearly $174.8 billion, down 1.4% from last year. Of the group, six Captives expanded their portfolios by nearly $3.4 billion combined, while six experienced combined declines totaling $5.9 billion, resulting in a collective drop of $2.5 billion.

The Independents maintained their 7.4% share of collective net assets, the same percentage they contributed in 2019, with 21 companies combining to provide $39.8 billion to the group, up 10.1% year over year. Of the Independents, 18 reported combined portfolio gains of $3.7 billion, while three experienced combined decreases of $56.8 million, resulting in an overall increase of nearly $3.7 billion for the group.

The Foreign Affiliates held onto their share of the collective portfolio, contributing 7.3% to the collective pot, up from 7.1% last year, reporting net assets of $39.2 billion, down 0.1% year over year. Six Foreign Affiliates achieved a combined portfolio increase of $866.4 million and three posted a combined decline of $905.2 million, resulting in a net decline of $38.8 million.

The one Insurance Company, recategorized this year from Not Elsewhere Classified, contributed 1.4% of the collective portfolio, or $7.5 billion, up 5.3% from nearly $7.2 billion in 2019.

Of the 69 companies that provided a forecast, 64 (88%) predicted an increase and five (7%) predicted a smaller year-end portfolio by year-end 2021. The collective forecast for the group, calculated on an average weighted basis, is 5.3%, which would increase total 2021 Monitor 100 net assets to $569.2 billion, a $28.5 billion increase. Last year, the group predicted a 3.9% annual increase, which was higher than the 0.8% decline experienced in 2020, although some of those predictions were obviously made before the onset of the COVID-19 pandemic.

The COVID-19 pandemic made the biggest impact on new business volume, as each segment reported declines. The 57 Banks experienced the highest percentage decline (-13.7%) while also contributing the largest dollar amount ($89.3 billion) and percentage (44.7%) of volume to the group. The Insurance Company posted the second largest decline (-12.6%) and contributed $1.95 billion (1%) of the group’s total volume. The 21 Independents’ decline of 11.1% was the third largest, with the group providing 4.4% of total volume. Foreign Affiliates posted the fourth largest originations decrease (-10.1%), contributing $19.5 billion (9.8%) of total volume. The smallest decrease was recorded by the 12 Captives, which provided $80.1 billion (40.1%) of total new business volume. 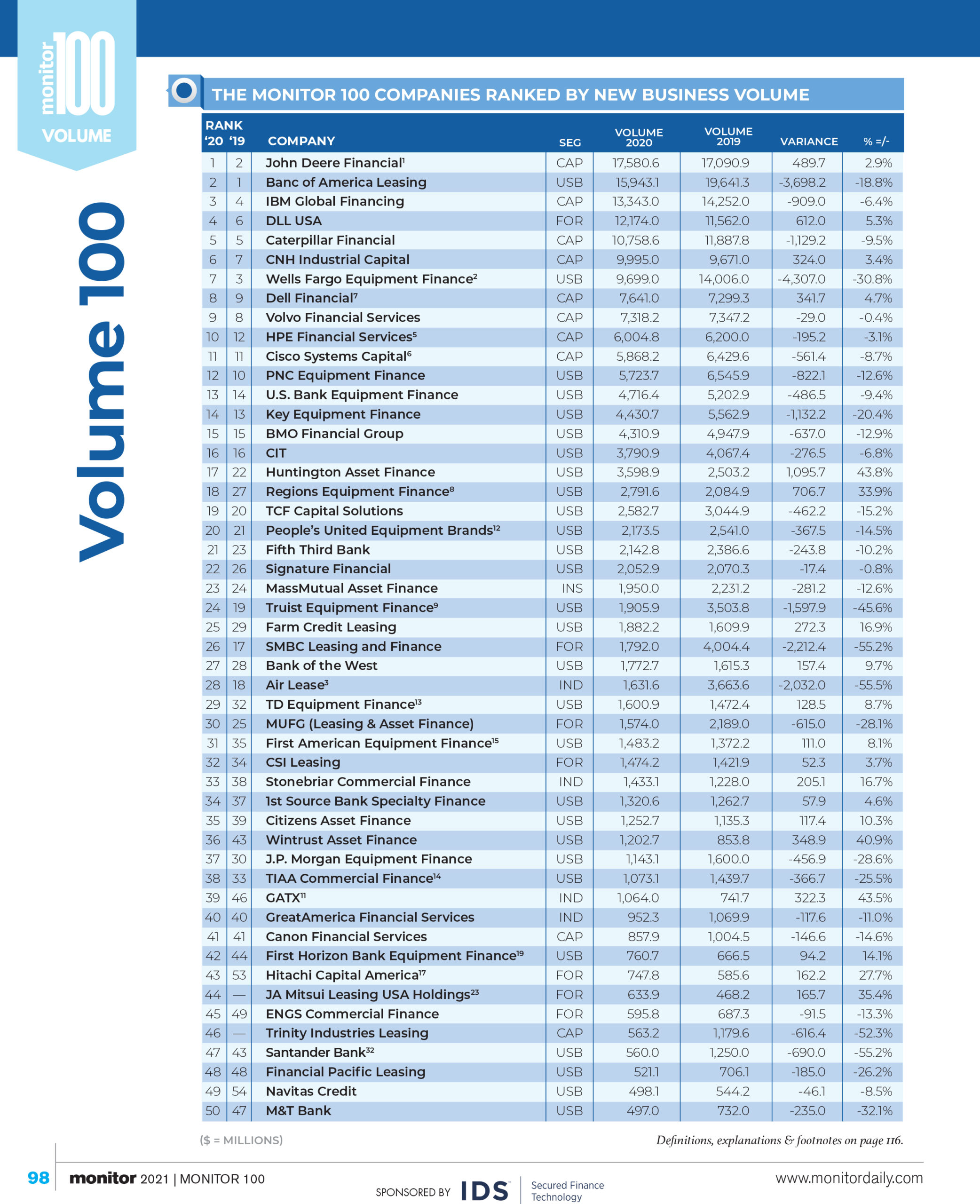 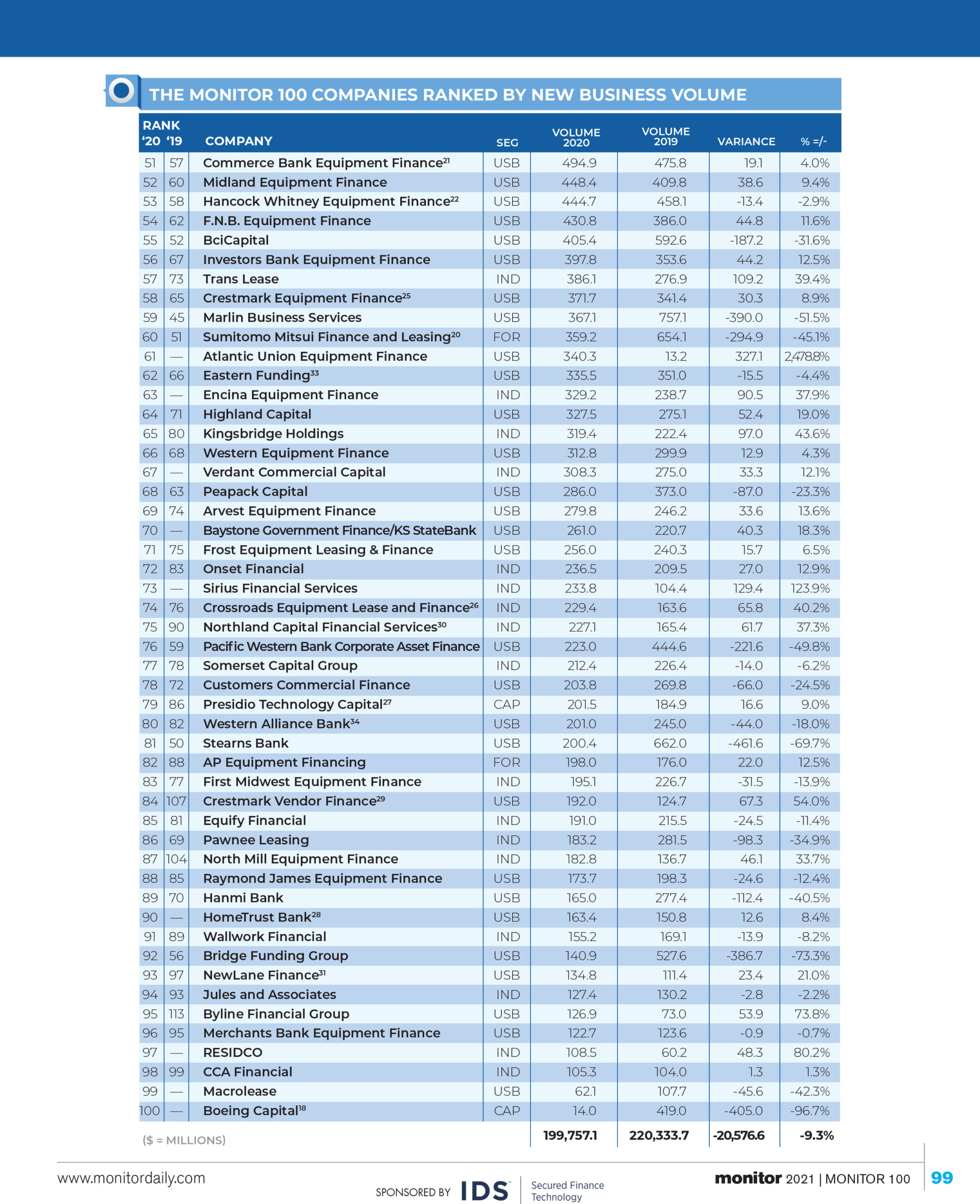 Of the 74 companies that provided a new business volume forecast for year-end 2021, 72 (97%) predicted an increase and two (3%) expected a decline. Calculating a forecast on an average weighted basis, the group predicted a 10.8% year-over-year gain in new business volume, which would bring total 2021 originations to $221.4 billion, a $21.7 billion increase. Looking at last year’s forecast of 4.6%, the group failed to foretell the significant 9.3% decrease in originations experienced in 2020.

Each year, we ask Monitor 100 participants to provide an overview of the challenges they faced in the preceding year. The following are a sample of the responses:

U.S. Bank Affiliate: “2020 was all about the three C’s: change, culture and communication. Given the incredible disruption in our world, the economy and all of our collective workforces, 2020 demanded focus on communicating effectively (and differently) with our employees, managing daily changes (and often making decisions with incomplete data) and trying to ensure consistency for our clients, employees and shareholders.

Foreign Affiliate: “2020 was a great year for our company, in a large part due to the fact that we were heavily involved in an industry that did very well during the pandemic. We were challenged with having to re-write a large number of transactions for customers affected by COVID-19 and by incredible demand for our products, which was unexpected. We charged off more transactions than expected due to the pandemic. Longer term, we continue to try to position our company to continue to grow profitably and compete in a quickly evolving technology environment and a highly competitive landscape.”

Independent: “It was the shift to a 100% work-from-home environment. The challenge was not in our ability to operate effectively, that went well. It was in understanding and keeping the focus on the human and cultural elements that are so critical to our organization. It is challenging to replicate the close personal relationships, communication and support that we were so used to when we were all together in the office. All of those are really critical to supporting each other internally and our customers.”