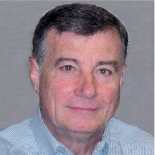 After a year of solid product sales, expansion in Europe and an enhanced focus on customer service, ADP Commercial Leasing entered the Monitor 100 at #72, one of seven new entrants to do so in this year’s ranking.

But Anthony Pacchiano, vice president and general manager attributes the ranking and the company’s growth to more than just a good year. “We made inroads in some of the other ADP businesses that were not utilizing leasing and financing in the past, and we increased our market share in our basic business, which is the dealer services unit.”

The company, which was founded 23 years ago, focuses on creating premier services for its clients and pays strict attention to high ethical standards, open communication and finding employees who are knowledgeable and dedicated to the industry.

According to Pacchiano, “We are a pure captive. We do not fund anything other than ADP products and services.” He feels the company stands out because of its unique focus on auto dealers.

“We have low overhead, a good performing portfolio… We provide total system solution financing… We look at what it takes to get a sale with a client and what does a client need from a financing standpoint. We’re able to blend all of them together and offer [customers] financing for all of the products that a client can buy from ADP, whether its servicing, hardware, software, licensing, implementation costs, etc.” ADP Commercial offers true leases, finance leases, loans and debt on leveraged leases, among other services.

Pacchiano joined ADP in 1997 with responsibility for expanding the scope as well as redefining the strategic direction of ADP Credit Corp. He also overseas ADP’s equipment leasing and financing activities to support the company’s sales on a global basis.

With more than 25 years of management experience in leasing, banking and operations, Pacchiano earned a BS in Economics and an MBA in Finance. Prior to joining ADP, he held senior-level positions with The CIT Group, Citicorp Industrial Credit, the American Express Co., and was president of JWP Credit Corp. At Citigroup, where he spent 15 years, he held such positions as vice president for equipment leasing, vice president of finance in the company’s asset-based subsidiary and vice president of operations. 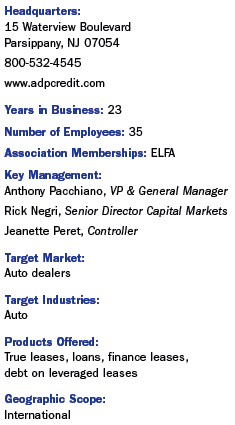 Staying One Step Ahead of Competitors
With a variety of industry experience under his belt, Pacchiano feels the middle market is underserved, noting that banks have gone in and out of the marketplace. “[Those in the middle market] are probably the greatest clients for leasing, because in most cases, they don’t care if it’s on balance sheet or off-balance sheet. They’re looking for convenience, low monthly payments and they’ll do business with the company they can easily do business with.”

He adds that one of the successes of ADP is that it is a one-stop shop for auto dealers in both their financing and system needs.

In the future, Pacchiano sees more banks coming back into the market. “There is too much money chasing too few deals, so the underserved marketplace will [suddenly] start to see suitors from a lending standpoint, which will drive margins, rates and competition,” he says.

In 2007 and beyond, ADP Commercial Leasing will focus on global expansion to support the company’s sales as it moves across the world. “We will move into ancillary markets, and will be able to support any kind of dealer beyond just auto dealerships. As [ADP] moves into these markets, we’ll move with them. I think we will continue to focus on efficiencies in terms of e-signatures, streamlining paperwork, things like that.” All the while, the unit will also focus on making further inroads into other ADP businesses.

Pacchiano sees the greatest opportunities in Europe and China, where ADP has already opened two offices. “I think it’s just a matter of time before we go there, which kind of dovetails very nicely into ADP’s growth.”

Getting Back to Basics
Pacchiano sees two main challenges on the horizon: increasing service and finding qualified employees. In the future, customers are going to demand even more service along with financing, as the commodization of equipment takes place.

“I think the $500 computer is going to replace everything and you’re going to be looking at services, licenses and managed services,” to compete. “For us, that’s an opportunity because we’re already doing that today.” ADP Commercial Leasing provides the managed service concept to customers where it focuses on the equipment’s residual value and the products that go along with the deal.

The biggest challenge Pacchiano sees is repopulating. “We’ve all talked about it at the ELFA, that we need to get more people into this industry out of school and stop cannibalizing each other’s people, because we’re always looking for experienced employees.

“No one is willing to take the time and teach new entrants the basics of leasing,” Pacchiano continues. “We want them to come in, bring a book of business and get going. That, to me, is a big problem. Succession planning is an issue… We’ve relied on the same folks for quite a while.”