Nearly a year ago in November 2007, Peter Borden took over as president of the American Machine Tool Distributors’ Association (AMTDA). Unlike many of his predecessors who had come from association backgrounds, in choosing Borden the AMTDA elevated a lifelong member of the machine tool industry to lead the group.

At 61, Borden has spent the better part of his professional life in the industry, most recently as CEO of Cincinnati’s Walker Machinery where he had worked for more than three decades. Upon taking his post, AMTDA chairman Kent Lorenz noted that Borden was stepping into the position at “a critical point” for the organization; membership is down and U.S. manufacturers are competing on an increasingly global marketplace. As Borden takes over, the association is beginning to gain back members and expanding member services.

When the Monitor caught up with him, Borden was returning from the International Manufacturing Technology Show (IMTS) in Chicago, where this year, despite a faltering economy, IMTS posted its strongest showing since 2000 with nearly 2,000 companies exhibiting and more than 90,000 attendees.

MONITOR: You only just took your post as president of AMTDA at the end of 2007, but have spent years in the organization including a stint as chairman. Can you comment on the importance of association to an industry like machine tools?

Peter Borden: All trade associations have to work on their relevance to their members every day. Our membership was at a historic high in 2001 and has fallen off by over 20% from the consolidation of the industry and the contraction in manufacturing that occurred from 2000 to 2003 at which point it began to rebound.

M: What does the AMTDA bring to its members and what do they in turn give back to each other?

PB: Our three core tenets are networking, statistics and education. For medium- and larger-sized companies, the programs that support these items help companies to run their businesses better. The smaller ones need other programs to help them find new employees and get better lines. We are working on some of these now.

M: Monthly data from your organization would seem to suggest the machine tool industry has remained relatively stable throughout much of the economic downturn, even showing some growth. Is this a fair statement?

PB: Thanks for noticing… Unfortunately the press reports very little about manufacturing; but of course housing was still booming after 9/11 when people stopped flying and the telecom business had crashed, and we didn’t get noticed then either. Manufacturing technology orders turned down sharply in July, with much of the downturn in fabricating and forming. However, 2008 remains stronger than both 2006 and 2007. IMTS was the most positive one ever. Yes, the market will turn down, but the exporters seem to be standing tall and holding their own.

M: Have there been any notable industry setbacks?

PB: With oil and gas drilling and construction so busy now, the biggest setback has been in the automotive industry in the upper Midwest/Great Lakes areas. Almost 40% of the automotive contract shops from ten years ago are gone.

M: Recent federal data shows durable goods orders ticked up last month on strong export numbers but some economists say that capital spending is going to slow down later this year — how much weight do you put into these kinds of government statistics?

PB: Durable goods orders are huge — who would question the value of Boeing’s backlog of airplanes. This provides a lot more value for the U.S. economy than many other sectors. That said, I think we’ll see a contraction in the next 18-24 months; it’s just a question of how much. We had recessions in 1980, 1990, 2001, so it will not go on forever. Companies have to absorb and use their capital investments. Capital goods are cyclical.

M: Your reporting data recently began referring to “machine tool” consumption as “manufacturing technology” consumption. What was the motivator behind this change in nomenclature?

PB: Much of the sales today come from items besides just machines, for example robotics or tooling or gaging and engineering work. So, the term “manufacturing technology” I think more accurately reflects the industry of today.

PB: This was a major boost to machine tool manufacturers along with the weak dollar. 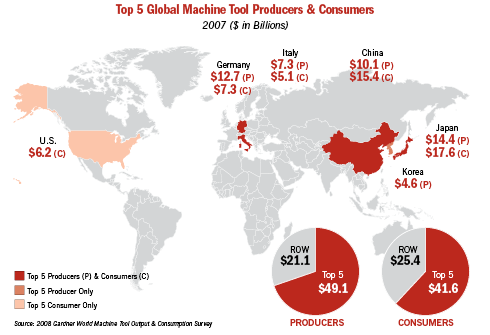 M: You’ve been in the industry for 30-plus years and have seen revolutionary changes; the globalization of industry must rank high on that list. How has the machine tool industry had to adjust to this global marketplace?

PB: The American machine tool industry was once preeminent in the world and now is much smaller. The Japanese and the Germans dominate many of the markets, and the Koreans, Taiwanese and the Italians are doing very well also, despite the currency issues. These countries seem to be more interested in protecting an industry that can provide valuable exports and a positive balance of trade and we are the free traders. The Chinese machines are now arriving quickly. The biggest change would be the adoption of these foreign machines by American companies, when 20-30 years ago, this would never have been done.

M: What are the biggest issues or concerns that you hear from the AMTDA constituency this year?

PB: Hiring issues are a concern for both our constituents and their customers; that is, finding qualified people to hire.

PB: I’m enjoying working at AMTDA tremendously and having a chance to spend some time on some of these broader, more strategic issues. I never cease to be impressed by the entrepreneurial drive and capabilities of our members.

Christopher Moraff is an associate editor of the Monitor.

Get to Know Artificial Intelligence: An Interview with Professor Manjeet Rege