Asset-Backed Securities: A Critical Tool in the Equipment Finance Market

by Kevin Ryan Monitor 100 2017
Wells Fargo Securities’ Kevin Ryan provides an overview of the equipment-backed ABS market. Thanks to its performance history and value spread, equipment lenders will continue to have to access this market, which bodes well for the industry at large, especially independents, captives and large cap finance company subsidiaries.

Equipment finance companies are responsible for financing a substantial portion of U.S. businesses’ capital expenditure budget through various channels of financial products. While these lenders can fund themselves in multiple wholesale financing markets, the asset-backed securities (ABS) market has proven to be a reliable source of funding for a variety of equipment lenders. The ABS market allows equipment lenders to aggregate and fund large pools of receivables in an efficient manner, from both a leverage and pricing perspective, while providing match funding of the assets and therefore mitigating refinance risk associated with mismatched assets and liabilities.

ABS is particularly attractive among small (less than $250,000) and medium ($250,000 to $5 million) ticket lessors — those that often lend to small and/or earlier-stage businesses. The growth mode status of these borrowers often means that leasing is utilized as a cash flow management tool that helps to fund expansion, which drives growth at the macroeconomic level through the creation of new jobs at the company itself and the manufacturer of the underlying equipment.

The following categories of equipment finance companies have their own reasons for tapping into the ABS market:

The State of the Market

During the credit crisis of 2008, overall U.S. ABS and equipment ABS volume dropped considerably. To give some context, equipment ABS volume and the number of deals in 2000 was $11 billion and 27, respectively, while 2008 saw less than $3 billion in volume with six deals coming to market.1 The overall malaise lasted until 2012 when we saw a significant rebound to pre-credit crisis volume and issuance activity.

More important than deal volume has been the creation of new equipment leasing platforms and new entrants into the ABS market since the credit crisis. Since 2009, 15 first-time issuers have accessed the ABS market, with total volume of approximately $6.7 billion. Of the 15 first-time issuers, 11 were equipment finance platforms that did not exist before the credit crisis, most of which could not have been created without a healthy and functioning ABS market.2 While a smaller piece of the broader equipment finance market, these startup platforms are critical in providing liquidity to small businesses that may not have access to bank financing.

Why such a significant rebound in the ABS market? Good credit performance through the 2008 cycle is a large part of the rationale. Credit spreads on three-year equipment ABS paper ranged between 10 to 20 basis points in the years leading up to 2008, but, beginning in May 2007, spreads rose dramatically and peaked at approximately 800 basis points by late 2008 (see Chart 2). Annualized actual losses, while exhibiting a similarly shaped curve, did not rise to nearly the levels implied by the severe spread widening. 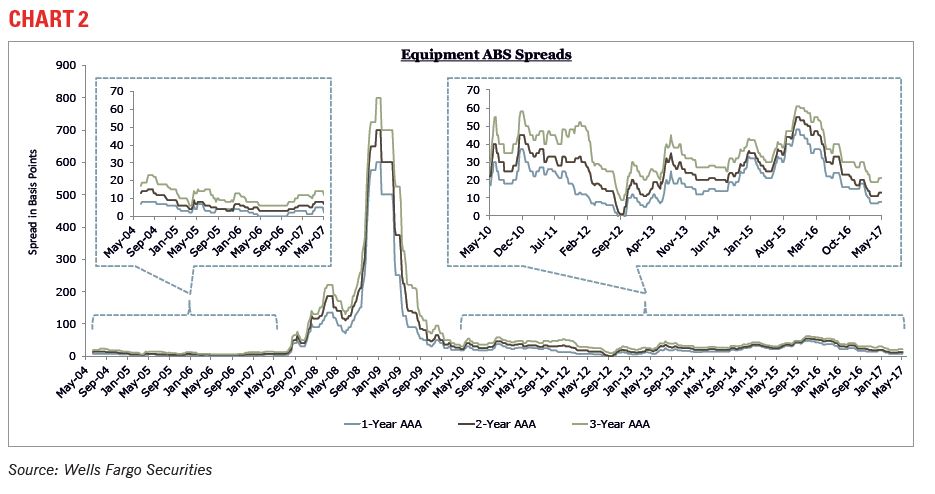 As Chart 3 shows, losses peaked at about 300 basis points, significantly higher than the pre-crisis run rate of about 50 basis points but nowhere close to materially affecting the cash flow performance of senior bonds in ABS structures. During this period, informed ABS investors were able to take advantage of the market dislocation and buy equipment ABS bonds at very attractive prices. Longer term, strong credit performance between 2007 and 2010 provided ABS investors with empirical evidence of the strength of equipment ABS bonds, and the related collateral, through a significant downturn. Such history will provide confidence in a growing investor base going forward. 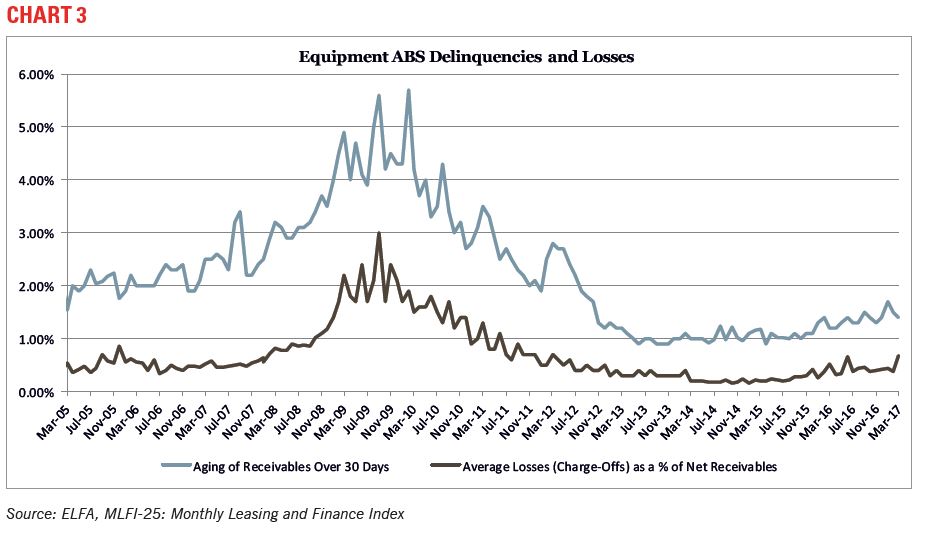 Year-to-date equipment ABS issuance for 2017 is $5.6 billion with nine deals executed.3 Market participants expect volume for the year to be in line with 2016. However, in the longer term, there is substantial room for growth in equipment ABS.

Issuance volume in the more liquid auto ABS market, often the benchmark used to price and trade equipment ABS, was $87 billion in 2016 and is expected to exceed that amount in 2017.3 The auto ABS market benefits from a liquidity premium that allows issuance at spreads that are inside equipment ABS.3

The combination of the fundamental performance history in the equipment ABS market and the relative value spread pickup investors receive compared to auto ABS will provide for substantial runway for equipment lenders to access the ABS market in the future.