by Amanda L. Gutshall October 2008
Balboa Capital’s new president Phil Silva loves the equipment leasing and finance industry. And that excitement is evident as we called on him to discuss his career, the company’s future and the state of the industry.

Working in a traditional “office” wasn’t on Silva’s mind when he joined Balboa Capital in April 2007 as an executive vice president to establish the newly formed Vendor Services Group.

After working for leasing companies for a number of years, as well as behind the scenes as a consultant, he “had full intentions of continuing as a consultant,” but Balboa was the right fit. And it seems the feeling was mutual. A little over a year after he joined the company, he was named president, after assuming responsibilities for all sales channels. 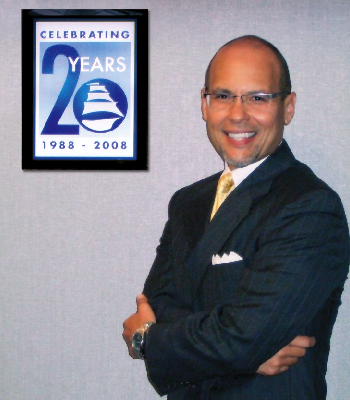 A 20-veteran of the finance industry, Silva has seen companies come and go and has been in the middle of some of the biggest mergers and acquisitions in the past two decades. A Hawaii native, he earned a Bachelor’s degree in Business Management from Whitworth University in Spokane, WA, before joining Master Lease Corp. in the mid-1980s. Since then, Master Lease was acquired by Tokai followed by De Lage Landen. From there, he moved on to Dana Commercial Credit where he worked in both field sales and field sales management. He stayed there for ten years but headed to Transamerica before Dana was purchased by Heller, then Heller by GE Capital.

After Transamerica, Silva spent eight years at American Express through its integrations of both Rockford Industries and Sierra Cities. There, he continued in field sales management before starting and running the company’s National Accounts Group. By the time the company was acquired by Key Equipment Finance, he was the general manager of American Express’ Healthcare, Franchise and Business Capital Loan segments. After the sale to Key, he stayed on for another year to help with the integration, before moving on as a consultant to the industry and … Balboa Capital.

“I had a great time getting some perspective as a consultant. I also had the opportunity to work with some small- to medium-sized equipment finance companies, and I thought I was going to do [consulting] for a long time, and when I least expected it, an opportunity to join Balboa Capital seemed like the right fit,” he says.

The motivating factor to join the 20-year old company? “Balboa Capital, in many ways, is a classic American success story,” Silva says. Today, Silva adds, it is one of the largest privately held independent finance companies in the U.S. While starting as a broker, Balboa expanded 11 years ago into a direct lender. Since then it has diversified into four segments that now serve not only brokers, but also small-ticket direct end-users and middle-market direct users. More recently, in fall 2007, Balboa established the company’s Vendor Services Group.

“Now we have four channels that are equally important… We’ve taken a lot of time and effort to build this foundation and I think that as we look to the future, we would like to have all of them equally contributing to our growth.” Establishing and maintaining four separate channels, Silva notes, isn’t easy. But, he adds, “I think that [launching the channels] is a lot of what has diversified our interests and also poised us for continued success.”

Leasing Industry’s ‘Best Kept Secret’
A lot of the attraction for Silva, and what he says keeps the company unique, is that it is a private, independent company that has developed a robust technology platform, as well as expanded its range of customer services. “That enables us to continually strive for certain efficiencies internally but at the same time, provide some real value for our vendor and broker partners as well as our end-users,” Silva explains.

Another aspect he discusses with pride, is the company’s culture. “It’s a very competitive culture, a very aspirational culture, a fun culture. It’s a platform that says to our employees: ‘If you do really well, this could be a launching pad for your career.’” According to Silva, the rallying cry for 2008 has been “Uncommon Effort,” which means “that you can achieve a lot, more than you even think you’re capable of, if you’re willing to expend a level of effort that others aren’t willing to make.” He stresses that you must combine this uncommon effort with endurance and perseverance; that it is a marathon, not a sprint. 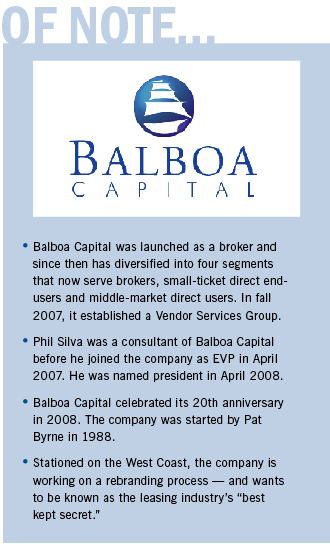 And it was ultimately this culture and the people behind it that sealed the deal for Silva, as well as the southern California weather, which is where Balboa Capital is headquartered. As for the team, many he knew when he worked at both American Express and as a consultant. “It was a homecoming of sorts. For me, it was an opportunity to continue to stretch and develop my leadership skills. The company is poised, it has done really well, and I just want to help this company do even better as we face the opportunities ahead.”

Being stationed on the West Coast, when many established equipment finance companies are located in the Midwest and East Coast, the company is working on a rebranding process — and wants to be known as the leasing industry’s “best kept secret. When partners, customers and candidates visit us, they realize that we provide a compelling value proposition, an alternative to a lot of the starting and stopping prevalent in our industry today,” he adds.

Does he worry about reestablishing and rebranding the company in the current economic crisis? Silva responds without hesitation, “Certainly, everyone would say we are in uncertain economic times, but at the same time we feel that this is our time. This is our time to fully leverage what we’ve put in place.”

In place with this rebranding is continuing to build on the company’s already established goals. As with any company, Balboa is centered on growth, but Silva phrases it as “prudent growth.” He adds, “Through our technology, our experienced management team and leadership … the platform really works from a profitability standpoint and all of that if we fully leverage it. Our goals? To add or to work toward prudent growth with an eye on profitability —  making sure that we’re as efficient as possible, not only in the external marketplace but also internally.”

Just as important is the company’s hunt for talented employees. “It’s really important that we hire the right people, and then once we hire them to do everything we can to help them be as successful as they’re able… I don’t think there’s anything more important in terms of treating your customers and your people in the best way and developing them accordingly.” He adds that the company is also getting back to the basics. “We’ve really gotten back to the fundamentals, and what that means is to take it in a measured course, continue to leverage the strengths that we have, but develop our people well beyond.”

Executing on Promises
Despite the fact that no matter what the Fed has done or the industry tries to do, there’s a lot flying at us at once, whether in delinquencies, rising costs, uncertainty of funding and, as always, fraud. “As we work through the prevailing economic and industry challenges, it requires a continuous focus on how we strategically manage our business from front to back.”

Silva notes no matter what the pressures are, all companies in the leasing and financing industry, while realizing the gravity, must also stay focused on the end goal. “All companies need to be concerned … need to concentrate on the fundamentals, doing what we do best, looking for opportunities … and in the end, bringing value to our end-users, our brokers and our vendor partners. If we do that, we are trusting that Balboa Capital will be a company that our partners choose to do business with … the destination place for them.”

He admits that while there are a number of things the company has no control over, it can certainly be more assertive in its risk and portfolio management strategies. “I think the real opportunities before us [that we have more control over] lie in how prepared we are, how well we listen to our customers and how often we spend time with them so, we are addressing the needs that are most important to them — to take a more consultative approach in the marketplace… I think that a lot of what we need to do is make sure that we are executing based on the promises that we make… This is not the time to be in maintain mode.”

Silva notes that for Balboa, it’s about the uncommon effort, the need to work smarter and work harder. “There’s no easy way to be successful. We understand that it is a struggle, but we’re willing, we’ve collectively made that decision that we’re going to do all of the small things very, very well. And we will always have room for improvement, but it’s that issue, that striving to continually get better, help our people get better, bring more value to our customers that we feel is going to help us be more successful not only now but over the long term.”

And here again is where the excitement Silva feels for the industry shines through. He can’t say enough about how the company is working even harder to ensure it provides superior customer service. He even talks about it on the company’s website and finds it humorous that as a human race we’re always surprised when we receive good customer service. But that’s exactly how Balboa wants to present itself to the industry and those it serves.

To do that though, he knows it’s “all about the people. If you treat your people really well, if you give them responsibility, if you train them and develop them, they’re going to figure it out… Balboa provides an opportunity for people to have a good time, to get back for the long of the game — to sharpen their skills and bring value to our customers.

“In this time of uncertainty, Balboa Capital can bring value in the eye of the storm to our employees, partners and customers to our mutual benefit. How can that not be exciting?”

Amanda L. Gutshall is associate editor of the Monitor.