Credit vs. Sales: The Battle for Approvals

by Linda P. Kester November/December 2017
Linda Kester explores the interplay between sales and credit departments. Taking a lesson from her own early experiences as a salesperson, she discusses common misconceptions the departments have about each other and shares methods for creating the synergy essential for success.

It’s my third day on the job. I’m being tested on my ability to calculate residuals. Working in a quiet conference room, the only sound is the faint clicking of a HP-12C calculator. Suddenly, another sales rep bursts through the door with a mischievous smile on his face. He shouts, “Eugene charged me $50 for this approval, and it’s normally only $25!” Puzzled, I turn to my sales manager who shakes his head, laughs out loud and says, “Can’t you see that we’re busy here? Let’s talk about this later.” The other rep tosses the deal on the table and storms out.

I was being set up. The seasoned employees were having some fun with me by making it seem like approvals could be bought from the credit manager.

A couple days later I got my first application from a computer dealer in North New Jersey. During a face-to-face cold call, the dealer opened the bottom drawer of his desk, pulled out a file, brushed the dust off of it and said, “If you can get this customer approved, I’ll give you more business in the future.” I was so excited. I sped down the turnpike, skipped into the office and submitted the $45,000 deal with high hopes. The next day it was returned with a big red declined stamped on top. Attached to the paperwork was a yellow post-it note stating, “$50 cash will turn this around.”

I took the deal to my manager and asked him what to do. He laughed and said, “Linda, if you give Eugene $50, he’ll stamp it approved, but it won’t be a real approval. He’ll set a three-month term, with 75% down and ask for personal guarantees from people not even associated with the company. They are messing with you. They want you to think that you can pay to get a deal done because it’s the precise opposite of the truth. Everyone here is vested in this company, and they want to make sure that you are ethical, that you can bring in real business and that you can take a joke.”

That leasing company, although full of practical jokers, was a phenomenal place to work. There was great comradery. The employees were like a family and looked out for each other. Reps were expected to push for higher approval rates, and credit was a dynamic machine that did the best it could to grow the company without putting it at risk. We had a magical combination of people, timing, communication and luck that resulted in tremendous growth.

Since that time, I’ve witnessed brokers, banks and financial corporations that are missing at least one of the puzzle pieces. I’ve also coached sales people who feel that credit subjects their transactions to a decision-making process resembling anything from a crapshoot to a battlefield.

Some of the notions include: 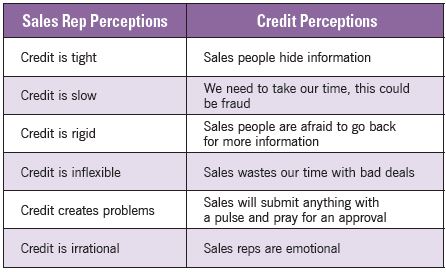 Granted, these are stock perceptions, yet they frequently arise. The two departments often have conflicting emotions about each other, ranging from admiration to suspicion and resentment.

The best way to address this conflict is from the top down. Once leadership recognizes this is an end-to-end sales process, including both sales and credit, service will improve. The process is internally managed and modified to maximize profit. A small number of finance companies have a process owner responsible for keeping track of key metrics, such as business charge-offs and sales lost to competition, which optimizes the entire process. Executives can talk about teamwork all day long, but it’s not enough. Once teamwork becomes a measured part of the credit/sales process, the magic can happen.

Leadership must accept responsibility for creating an open and positive culture that resolves issues quickly, making the team more eager to succeed. Management that allows issues to fester cannibalizes the company. Understanding the goals and challenges of both departments is the key. Fight against the competition, not amongst yourselves. The goal is a well-informed decision reached efficiently and satisfactorily.

If you can’t influence company culture, step up your internal sales game. Both credit and sales need to sell the deal within the organization.

Selling to the Credit Department

Let’s look at a transaction from a credit analyst’s point of view. The first thing she considers is how the transaction was originated. Who is the rep, vendor or broker on the deal? This might not seem fair, but think about it. Most people won’t even like a post on Facebook without checking who posted the content.

The best brokers have an intimate understanding of a funding source’s appetite. This is vital because they can be cut off quickly if approvals don’t close. New brokers don’t realize that if you submit deals without booking them, a funding source will shut down your business in the future.

Brokers must be thorough and provide full disclosure of all the information obtained. If they don’t, and a transaction goes bad, they may be required to buy it back.

Vendor and national account originations are easier to present to credit analysts because they have a track record with the industry. The danger is the vendor may put pressure on the salesperson, which results in pressure on the credit department. A bottom tier or inexperienced salesperson will fight for a marginal deal because he doesn’t have anything else in the pipeline. A salesperson can get a bad reputation with credit this way, and once this happens, credit may only approve his deals begrudgingly.

Successful reps have many applications coming in the door, so a decline doesn’t rattle them. They know what will get approved and don’t waste time on deals that aren’t a match.

Direct lessee origination packaged with three years of financials is like giving the credit department a gift. The more data you obtain up front from the customer the better — every time you go back for more information it weakens the deal.

Selling to the Sales Department

When an analyst declines a deal, she must explain the logic and decision-making process in a way that allows the rep to own the decision too. When a salesperson understands the factors credit considered, he develops trust and respect for the decision maker.

When credit treats a salesperson like he is a nuisance who must be tolerated, antagonism builds. An analyst confused about conflicting information must be careful that her confusion isn’t misinterpreted as irritation.

On the other side of the coin, if the analyst uncovers a strong credit, she must tell the rep this is an ample lessee and encourage him to go after more business.

So sales reps can fully understand the repercussions of a bad deal, require the sales team to rotate the responsibility of sitting in on charge-off meetings.

Maybe I should have expected that my first application was a dud because it was dusty and in the bottom of the vendor’s desk. I was brand new, and my only instruction was to get an application. Everybody has to start somewhere. Be patient with new employees in sales and credit. The credit department had a nice laugh at my expense, and sometimes laughter is the best teacher. It’s fun to use humor while training, but you might want to think twice about encouraging bribes.