De Lage Landen Financial Services: A Man of the World

When we spoke recently to Marc Cootjans, De Lage Landen Financial Services’ new group chief operating officer, he was celebrating his one-year anniversary in the United States. Married with an 18 month-old son and another child on the way, the 37-year-old native of the Netherlands has clearly made a home for himself and his family in America. “It’s great to live here,” he says, reflecting on the past year. “It’s really a great country.”

Considering the global nature of De Lage Landen, it’s fitting that the company would have a Dutchman, living in America, with oversight of offices as far away as China. It’s a paradigm that has served the company well in recent years, particularly as disruptions in the U.S. credit markets have begun to ripple throughout the international economy.

“Not only on a geographical basis, but also on an industry basis, we are at this moment really benefiting from that diversification,” Cootjans says.

As Cootjans explains it, a big part of De Lage Landen’s growth and success rests on the company’s universal approach and its comprehensive client service model.“We are a vendor finance company at heart and we have a lot of global vendor relationships,” Cootjans says. “Our strategy is to offer our clients a solution across the world so in every geography that they are active in, we would like to be active in.

“The value proposition we have to offer is that they can get what they want no matter where they are in the world,” he continues. “So globalization of the economy really is very beneficial to our strategy because it is our strategy.”

Cootjans admits that under the circumstances, the job keeps him on his toes. Several times a year he makes what he calls a “mini world tour” visiting De Lage Landen units in Europe, Asia and Latin America. “I am on the road a lot. But I try to combine my traveling into a couple of extensive trips so I am not away all of the time,” he says.

A long-time Rabobank executive, Cootjans began his finance career there in 1995, and for the next 13 years worked his way through the corporate establishment. It didn’t take long for him to develop the experience and acumen that made him an ideal choice for his current position as one the company’s five executive board members.

“I took a path of various roles and jobs,” says Cootjans, “but the last one I had was responsibility for the retail banking operation in the Netherlands.” As executive vice president for the bank’s private client business, he helped craft Rabobank’s interactive banking initiative.

Last year, shortly after being asked to join the executive board of De Lage Landen, Cootjans moved to the United States, where he now oversees the company’s global operations from its largest U.S. office — a stone’s throw from the offices of the Monitor in Wayne, PA. 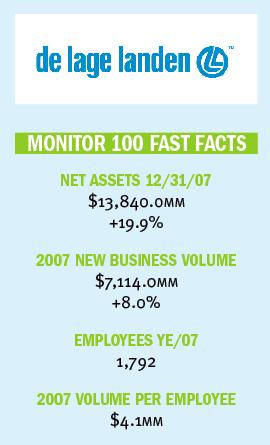 De Lage Landen was founded in 1969 as a consumer credit company jointly owned by Rabobank and Interpolis Insurance. During the early 1970s, De Lage Landen broadened its scope by establishing a business finance unit. It has since grown into a major global leasing and finance company with nearly 1,800 employees in the U.S.

The company began to grow exponentially in 1987, when it first began offering services in countries outside of the Netherlands and initiated a program of aggressive European expansion. Most recently, in April 2008, the company made its debut in Portugal with the establishment of a five-person office near Lisbon.

In 1998, De Lage Landed expanded into the Americas. Since then the company has continued to aggressively broaden both its geographical scope and its product suite.

De Lage Landen has consistently ranked in the top 20 of the Monitor 100; in the three years from 2003 to 2006, the company jumped from #18 to #11. Its one-position slip this year, from #11 to #12, is more the result of the significant increases of several other participants rather than any deceleration in growth on the part of De Lage Landen. In fact, the company reported a 20% growth in net assets last year, showing assets of roughly $14 billion and new business volume of more than $7 billion.

Despite the uncertainties within the international financial markets, De Lage Landen expects double-digit growth for the coming year. Cootjans attributes this to the company’s diversified structure, but says even though the company’s risk is spread out, the current environment demands caution. For this reason, he cites diminishing credit quality as perhaps the company’s most pressing concern in 2008.

“When you look at the general state of the economy and specific sectors in the U.S. economy, of course we are paying closer attention to what’s going on,” he says. “Profit-wise we are doing very well but in some sectors and some clusters of the industry we see delinquencies going up. If credit quality was not high on our agenda in an economy like this, I don’t think we would be the strong financial services company we are.”

Going forward, Cootjans says he plans to spend his second year at the helm of De Lage Landen building on the fruits of the first, and plans to continue to push initiatives through, particularly in the emerging markets.

“In general we plan to keep following the vendor,” Cootjans says. “Globalization is very high on our agenda, and that means these days, of course, the emerging markets Latin America, Eastern Europe and Asia.”