by Ellie Delaney Nov/Dec 2020
COVID-19 put a halt to the 2020 ELFA Convention, but that didn’t stop the industry from coming together to learn, network and laugh. ELFA Business LIVE! was an industry meetup for the record books.

For industries that depend on exhibitor trade shows, conventions and in-person meetings for networking, COVID-19 has completely disrupted the landscape, posing challenges to those who lean on and put dollars into large gatherings. Important conversations, business development and the transfer of knowledge and ideas are key at these shows — and the Equipment Leasing and Finance Association did an exemplary job of accomplishing those tasks while facing the challenge of taking its annual convention digital with ELFA 2020 Business LIVE!

To encourage seamless and organic networking interaction, the ELFA hosted a virtual platform for members to meet and chat, complete with lounges, private chat rooms, a list of saved contacts and multiple forums for communication and meeting. 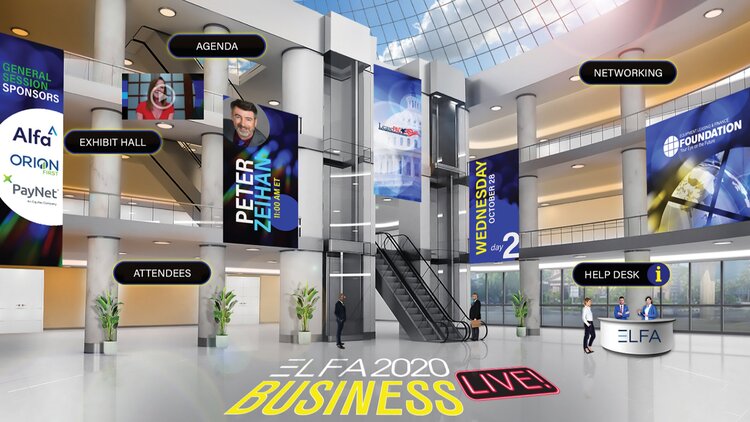 Ralph Petta, president and CEO of ELFA, opened the event with something nobody in the audience could prepare for: a homemade, professionally produced music video and original record, which consisted of live featured clips from different ELFA members singing and playing instruments. That’s how you kick off an online event in 2020 with excitement, laughs and engagement. Creating a music video with contributors across the country from scratch is not an easy feat — but a little bit of out of the box thinking is what keeps a human connection in today’s environment of phone calls, Zoom meetings and weekly webinars.

In his welcoming remarks, Petta addressed the impacts the industry and economy are enduring as a result of COVID-19, suggesting that the crisis is an opportunity to fundamentally revisit how business is done and what truly matters. The ELFA responded to the pandemic, as well as the growing awareness surrounding the racial crises in our nation, through dedicated communication from equality committees, task forces and the board of directors. In trying to provide the best support possible in an economic crisis, these groups have been staying in touch with members virtually to exchange best practices while contributing and downloading tons of industry data through community discussions, weekly webinars, the ELFA mobile app and social media.

Petta mentioned that the ELFA took action early to ensure equipment leases were included as collateral under the TALF 2.0 program and also advocated to be eligible for industry relief under the RESTART Act. Leaders also worked together to ensure members were aware of pandemic response programs as soon as they were available.

In response to the rising racial tensions in the United States, Petta remarked that the association has established new efforts to build out diversity and inclusion. In the wake of the death of George Floyd in Minneapolis, the ELFA released a statement reinstating its commitment and dedication to fight racial injustice and tolerance and followed that with a series of webinar discussions on the issue. In addition, the ELFA Equality Committee hosted “There Is More Than Meets the Eye: Diversity and Inclusion Beyond Race” on the first day of 2020 LIVE!, discussing how diversity is deeper than the physical attributes with which we associate the term.

“ELFA never stands still. Today’s change of pace is a stampede, and if we remain stagnant, we’re going to get run over. We have a business responsibility to keep up with and get out in front of,” Petta said.

Donna Brazile, political strategist and commentator, joined Petta to promote a diverse perspective of political current affairs at the time, which was only one week before the national elections. Brazile, who was a campaign manager for Al Gore (and the first African American woman ever in this role), addressed the presidential and congressional elections, ending with a call to action for everyone to get involved.

Over the two days of the event, industry leaders participated in discussions on a range of topics, some focused on COVID-19 specifically and others covering general industry trends. Some of the sessions included “Finding Growth After COVID,” “How Data Analytics Can Improve Your Business Results” and “Automating Credit Decisioning & Risk Modeling.”

Diving deeper, the “Balancing Tech and the Human Interaction” session discussed how to balance the needs of utilizing technology to automate and innovate processes while maintaining a human approach. As technology evolves, is it possible to leverage it to improve relationships with customers? Rather than resisting innovation for the sake of the human factor, companies can control how they respond and take advantage of innovation in a way that puts the customer at the center of the conversation.

In addition, a back-to-basics session introducing the equipment leasing and finance industry was hosted by Bob Golden, CEO of BoCon Group, and Gary Anderson, an ELFA instructor.

The Women’s Council, led by Deborah Baker, hosted a session focusing on the intersection of confidence and resilience and how they can be combined to overcome personal and professional challenges.

During the Foundation General Session, Thacker and Rossell discussed a framework for understanding how the pandemic is transmitting itself through the global economy as well as what impact it’s likely to have on interest, savings, default rates and the future of economic activity. In discussing how companies interact with customers and vendors in 2020, Rossell asked members to consider, “What’s working well that will stay in place? How do we still need to adapt for personal and business success? How do we plan for 2021 and beyond with so much uncertainty?” The Foundation’s Industry Future Council continues to explore what’s next for the industry and its people, and a large part of preparing for future changes is data. Data and information are critical in any crisis, and the Foundation received a high volume of digital inquiries this year. In response, it provided resources on deferrals, credit risk delinquencies, furloughs and more. Conducting forward-looking research is imperative right now, and beginning last April, the Foundation began to send out a monthly COVID-19 impact survey to track different effects of the pandemic on the industry.

Rossell said the pandemic looks completely different than any other previous economic disruptor, laying out three distinct ways the virus transmits itself through the economy, including the negative impact on income, the positive impact on wealth and the channel of uncertainty which affects business’ planning processes and causes shifts in production. COVID-19 is a reallocation shock that fundamentally (and in many cases, permanently) changes the way we live, work and play, and it’s more important than ever to work together to overcome these challenges.

During the keynote session for day two of the conference, Zeihan, who analyzes data from geography, populations and global politics to understand economic trends and to make predictions, offered a geopolitical analysis of the recent U.S. elections, which were held the week following the conference.

Zeihan provided an educational overview of the current U.S. government, breaking down the basics of the electoral system to deliver a fully comprehensive summary of future projected changes due to the elections. Analyzing each voter type, Zeihan discussed global demographics and conveyed projected trends in graphics and charts to deliver usable and proven data to the audience. Zeihan explained the consumption burst in recent years as well as economic behaviors expected from a consumption-led economy.

ELFA 2020 Business LIVE brought members together to exchange industry knowledge and address the current and future impact of COVID-19 on the economy and equipment finance industry. The ELFA also restated its commitment to promoting diversity and confronting racial injustices in America while boosting engagement with one another in a world where we’re confined to our workspaces. The pandemic has upended priorities, forced new protocols and altered life across the globe. While change of this magnitude is hard to grasp, associations like the ELFA have pivoted to find new ways to keep going and focus on what really matters.

“ELFA volunteers and staff professionals have pivoted every day, innovating and working harder than ever to bring members resources they need to deal with the enormous change,” Martha Ahlers, ELFA board chair, said.

Ellie Delaney is a freelance editor based in Philadelphia.