The equipment leasing sector is experiencing a prolonged favorable phase of the economic cycle and is generally expected to further benefit from the lowered corporate tax rate. The Tax Cuts and Jobs Act, coupled with the continuing strength of the economy, is creating demand for equipment. In this climate, asset-backed securitizations (ABS) secured by equipment collateral continue to draw strong investor interest.

The recent past illustrates how strong performance of the underlying collateral — manifested in equipment-backed ABS performance — and portfolio management strategies employed by independent lessors increased interest in industry players from a broad range of suitors. However, the possibility of emerging competition from new types of lenders may have an impact on future performance.

Independent equipment lessors in transactions rated by DBRS continue to deliver stable credit performance and maintain underwriting discipline while growing the size of their managed portfolios. The industry appears to have largely worked through challenges experienced by the domestic oil production business. Even ABS issuers focused on the transportation sector, which went through an 18-month disruption from the end of 2014 to the middle of 2016, managed through the difficult period prudently, and ABS sponsors did not see enough deterioration in performance to warrant any negative rating actions by DBRS.

Comparing 30-plus days delinquencies for a representative sample of the small-ticket equipment-backed term ABS, rated by DBRS since 2014, with the Equipment Leasing and Finance Association’s Monthly Leasing & Finance Index: Aging of Receivables Over 30 Days, demonstrates that the majority of the ABS have achieved lower delinquency rates than the MLFI average. 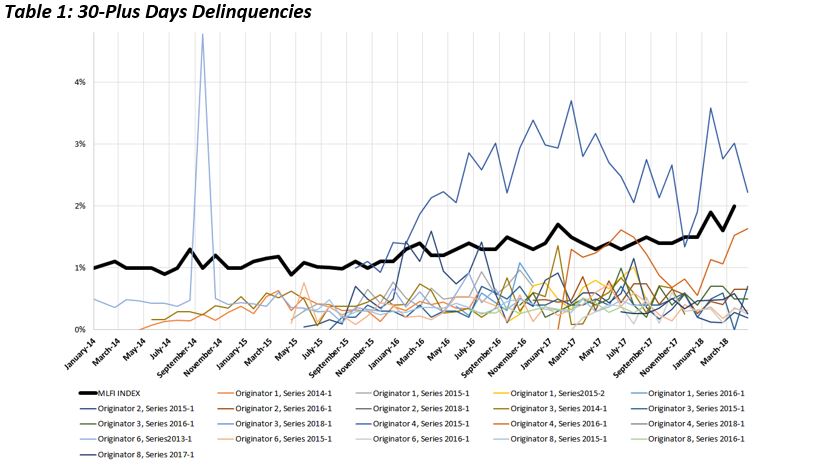 Static pool cumulative net loss performance of a representative sample of the small- and large-ticket equipment-backed term ABS, sponsored by independent equipment lessors and rated by DBRS since 2014, shows credit performance of portfolios managed by non-captive lessors is not, at this point, displaying the signs of weak performance which would indicate deteriorating underwriting standards. 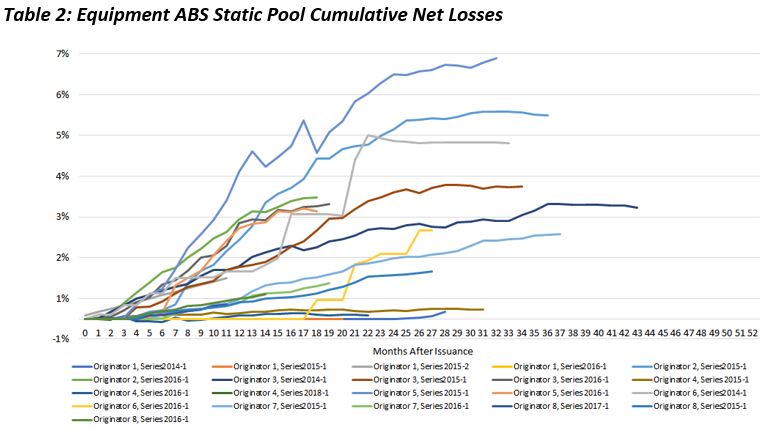 This strong and steady performance did not go unnoticed by the market. The last two years, in particular, saw an increasing volume of acquisitions of independent originators by a variety of investors including other lessors, private equity firms, business development companies and regional banks. Table 3 summarizes notable acquisitions announced from 2015 to date. While the acquisition activity may reduce the volume of term ABS brought to market by the independent originators in the short term, DBRS believes continuing strength in the industry and wide investor acceptance are likely to entice new entrants to the equipment-backed ABS. 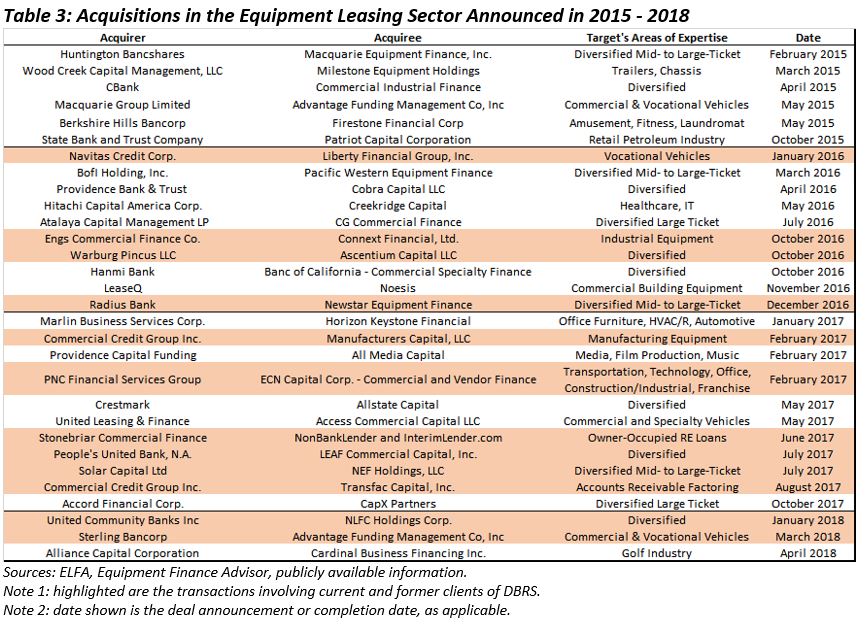 Over the last few years, in order to facilitate further growth and manage portfolio risk, non-captive lessors have generally increased diversity of their asset mix. For example, Commercial Credit Group and ENGS Commercial Finance are providing financing for manufacturing and industrial equipment in addition to their more traditional collateral asset mix.
The recent downturn in the freight transportation industry has generally reduced the growth of truck financing originations in the independent lessors’ portfolios. While the lessors focused on the transportation industry responded to the unfavorable conditions by tightening underwriting standards, adding new asset classes to their financed asset mix and reducing the origination volume, the more diversified lessors focused a greater share of the originations on asset classes such as medical (including lasers), construction, computers, manufacturing and industrial equipment.

Are Fintechs Becoming a Competitive Threat?

Despite the success of non-captive equipment-backed ABS sponsors in navigating the markets, potential threats to their performance remain, ranging from traditional factors, such as economic or industry downturns and loosened credit standards, to emerging competition. Even with discernable growth in originations, fintechs have not presented a meaningful competitive threat to equipment lessors. But over the last 18 months, both key players and relatively new entrants in the unsecured business lending area have introduced or expanded the longer-term and larger balance financing options. New players targeting specific industry niches, like franchisees, are emerging.

Since the fintech market is still developing, it is hard to fully quantify the size and scale of the potential impact of these new funding options on the equipment leasing industry. Observers will be closely watching for any signs of emerging new competition and its impact on independent equipment lessors’ business.

The Favorable Cycle Continues but Investors Must Be Vigilant

The current favorable cycle shows no measurable signs of abating. The equipment leasing sector continues to enjoy strong support from ABS investors, which has served as a catalyst for robust M&A activity over the last few years. Nevertheless, investors should maintain vigilance when monitoring the industry’s performance for any signs of increases in lessee delinquencies, defaults and recovery rate deterioration as well as any possible external factors, such as increased competition from online lenders, which may affect equipment lessors’ performance.