Strong interest in mergers and acquisitions of equipment leasing and finance companies continues. However, after two years of very high activity, due partly to the GE Capital divestiture, the number of significant acquisitions declined slightly in 2017. Nevertheless, because a few sizable independent leasing companies remain, the successful companies offered for sale in 2017 found a relatively large number of buyers that increased selling prices. 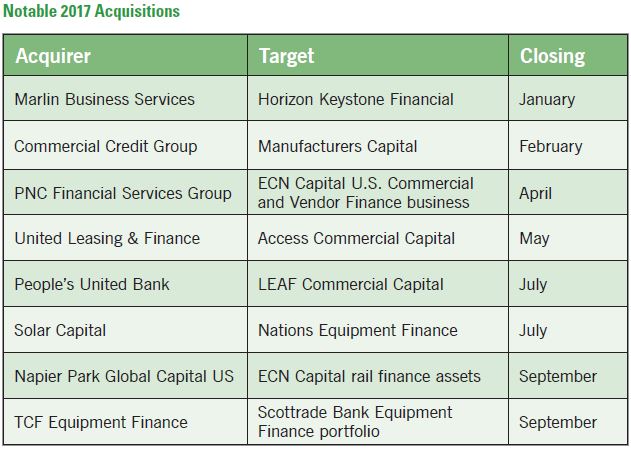 Additionally, Lovell Minnick Partners made an investment in Currency Capital in January, and Midland States Bancorp hired Fred Van Etten, former president of Scottrade Bank Equipment Finance, along with a group of his former employees in late 2017.

The activity level at the beginning of 2018 gives us reason to expect another good year for M&A transactions. Several attractive companies are currently being offered for sale, and many buyers are proactively attempting to acquire an equipment leasing business. Economic indicators are positive, and business leaders and economists generally believe the long period of economic growth will continue in 2018.

Still, we must be mindful of factors that could impact activity and/or pricing of the M&A market negatively or positively in the coming year, including:

Interest rates and the stock market usually have a bearing on the valuation of companies offered for sale. The Federal Reserve continued to raise the federal funds rate in 2017, and more increases are expected in 2018. Higher interest rates typically cause acquirers to increase their return on investment requirements, resulting in lower acquisition valuations, which may cause potential sellers to delay their plans to sell.

The tax reform legislation enacted near the end of 2017 has a significant impact on the U.S. equipment leasing industry and on M&A valuations. Many equipment leasing companies were able to get an immediate positive impact in their calendar year 2017 profitability by reducing their deferred tax liability from an assumed 35% or 34% federal income tax rate to the new 21% corporate income tax rate effective January 1, 2018. Going forward, the 21% corporate income tax rate will result in a significant increase in net income for profitable C corporation businesses. Larger corporations paying the 35% tax rate will have a 40% reduction in federal income tax expense and a 21.5% increase in net income, assuming all other factors remain the same. For corporations with taxable income up to $10 million that previously had a 34% marginal tax rate, the reduction to a 21% tax rate will increase their net income by 19.7%.

Will the 21.5% or 19.7% increase in net income resulting from the lower corporate income tax rate also increase M&A valuations by the same percentage? Not necessarily. One reason the tax rate reduction may not be a big immediate factor in private company valuations is private company valuations are quite dependent upon public company valuations. Public company valuations increased approximately 20% in 2017, and part of that increase, particularly in the closing months of the year, reflected a hope that President Trump’s efforts to reduce the corporate tax rate would be successful. The likelihood that stock prices anticipated the passage of tax reform legislation may have been confirmed by the very modest net gains in the stock market since the legislation was enacted in late December. However, there is no doubt that the long-term impact of the corporate tax rate reduction on the valuation of privately owned companies in M&A valuations will be very positive.

Other provisions in the tax reform legislation will affect the equipment leasing industry and, potentially, the valuations of leasing companies. The limitation on interest deductions could have an adverse effect on some leasing companies, particularly those using securitizations. Also, potential acquirers planning to use substantial debt in financing the acquisition could find leasing company acquisitions less attractive.

Accounting rule changes also could affect leasing company valuations. The long-awaited FASB lease accounting rule changes spelled out in Topic 842 will be effective for public calendar year companies in 2019 and for privately-owned calendar year companies in 2020. Although the new rules eliminate one advantage of leasing by requiring operating leases to be shown on the lessee’s balance sheet, the rule changes have been widely anticipated and are not likely to have a significant bearing on equipment leasing activity or leasing company valuations. However, FASB Topic 326 on credit losses will be effective soon after Topic 842 and could significantly affect valuations of equipment leasing and finance companies. Companies would be wise to plan ahead so the new requirements do not have a major effect on their profitability.

Accounting Standards Update 2016-13 was issued on June 16, 2016. This update was specifically designed to improve the amount and timing of credit losses by requiring financial institutions to consider historical experience, current conditions and reasonable expectations for future performance, including estimates of prepayments over the life of a financial contract.

The new standard, sometimes referred to as the current expected credit loss (CECL) model, requires the immediate recognition of all expected credit losses using historical, current and reasonable future assumptions. This standard is designed to provide a more transparent view of the expected losses in a portfolio than the current incurred loss model methodology. The incurred loss model in effect today delays the recognition of credit losses until it is probable that a loss has been incurred. For the most part, this means a credit loss on a contract cannot be recognized under generally accepted accounting principles (GAAP) until the probability of loss for an asset was more likely than not to occur.

The shortfall in the current standard was evident during the financial crisis when banks and other financial institutions repeatedly took significant provisions for credit losses each financial reporting period as contracts met the probable standard threshold. The standard did not support the more timely recognition of losses by these financial institutions since the probability of loss requirement had not been met. The current standard ignored recognizing credit losses based on expected future results and focused only on transactions that met the probability of loss standard at the time the financial statements were prepared.

Application of the New Standard

Companies are not required to comply with the new standard yet but should be effectively using this time to determine the tools and resources needed to do so.

Early adoption of the new standard is allowed for all companies for fiscal years and interim periods beginning after December 15, 2018.

Requirements to Assess the Adequacy of the Allowance

Under the new standard, companies will need to develop new tools and forecasting models designed to measure the expected losses over the life of a financial asset. Financial institutions will have to consider which asset types to assess individually and which asset types to group together and assess on a pool basis because the contracts share a demonstrated similar credit performance profile. Financial institutions will also need to develop consistent methodologies to determine the likelihood of future performance of each contract based upon expected results.

Companies that adopt the new standard and can effectively demonstrate their ability to determine the expected credit losses consistently over time will be more attractive to a potential acquirer and will warrant a higher purchase price than their peers, all else being equal, for several reasons.

To a potential acquirer, sellers maintaining compliance with GAAP meeting the requirements of an unqualified audit opinion will always be worth more than their counterparts that do not comply. These companies provide greater transparency and an additional level of comfort to users of their financial statements, including their senior management teams, investors and potential acquirers.

Due diligence reviews associated with potential acquisitions currently invest a significant amount of time and effort assessing inherent risks in the portfolio to determine the magnitude and timing of losses and the free net cash flows that can be achieved for a given investment. A potential buyer and seller often have differences of opinion regarding future loss expectations. A seller that can clearly demonstrate a history of success in predicting the expected losses through a well-developed and organized set of predictive models will be in a much better negotiating position.

A seller that can predict net cash flows to be received from either a new origination or a portfolio with a high degree of accuracy will be able to command a higher price premium from a potential acquirer. The more accurately the future cash flows can be predicted, the lower the risk premium assigned to the discount rate and the higher the purchase price for the seller.

This new loss standard information also can be used to significantly improve the pricing function by ensuring contracts are priced to achieve the targeted return requirements based on their full life cycle expected loss rates. Additionally, institutions may decide to exit specific markets where returns cannot be achieved and alternatively may decide to invest more heavily in markets where returns are achievable, resulting in higher profitability.

The new standard should also result in a more consistent level of provision for credit losses each period, which will ensure a more consistent bottom line for potential sellers. Since the new standard requires the expected loss amount for a given asset to be reserved when the asset is originated, less volatility in the level of provisions should be experienced than the current incurred loss model standard. This consistency and additional stability in the provisions and net income for a given seller will ultimately result in a higher purchase price due to the certainty associated with the expected returns.

Current levels of M&A activity and future economic indications point to another successful year of activity in 2018. Barring the occurrence of the potential risks outlined in this article, we expect the M&A market to remain active during 2018 and for valuations of quality equipment finance companies to remain strong.

Companies must understand the implications of tax reform legislation and the new standards under the expected credit loss models. Companies that adapt their business models and product offerings to take advantage of the new legislation and standards will benefit the most and be the most attractive targets for investors and buyers.