Straightforward, industrious and self-assured are just a few of the first impressions one gets when speaking with Tom Depping, chairman and CEO of Main Street National Bank of Kingwood, TX. 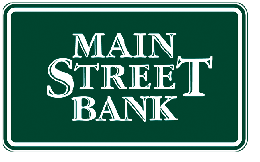 Depping, originally from Frankenmuth, MI, moved to Houston in 1981 in the middle of the oil boom of the late 1970s to the early 1980s — a time when many were relocating from the Rust Belt to the Golden Buckle of the Sun Belt. With an accounting degree from Eastern Michigan University and some experience at KPMG International, he joined First City National Bank’s equipment leasing unit as its lease accounting officer. “After a year or two in accounting, I wound up as VP of Finance and eventually moved into sales,” Depping recalls.

From that point on, things just seemed to take off for Depping. When First City’s leasing unit was sold to Sun America, Depping, through a series of promotions, was eventually appointed president of Sun America Financial Services, a position he held from 1991 to 1994.

The Drive to Innovate
After leaving Sun America, Depping formed a de novo operation called First Sierra to capitalize on what he saw was the growth potential of the small-ticket equipment finance business. Depping explains, “Even though I was with First City/Sun America for about 13 years, I think most people know me from First Sierra. We were a complete startup with $1 million in capital at the start. In 1997, we went public and raised about $10 million more, and by 1999, we were doing $1 billion a year in volume.”

And from where Depping sits, First Sierra’s rapid growth was anything but accidental. “At First Sierra, we developed an industry leading technology platform, which caught the attention of the investment bankers and, in 1999, they converted us to a dot-com. That was all great until the bubble burst in 2001. At that point, we sold First Sierra to American Express. But what was great about it was that the initial investors in First Sierra earned a return of a little over 3000% on their investment. Not bad at all.”

A ‘Kind of’ Retirement
At the age of 43, Depping found himself with some time on his hands. Depping reflects, “I ‘kind of’ took a few years off at that point. But I got bored and started a couple of companies … one of which I sold in November of 2007, the other one is still around.”

For Depping, taking “a few years off” was occupied by forming Vision Sports Marketing with Hal Pastner, his partner at the time. The company produced national Amateur Athletic Union (AAU) tournaments, two of which —  The Main Event in Las Vegas and the Kingwood Houston Classic — were the largest high school basketball tournaments in the country. His other venture involved the development of Ski Village Resorts, a property management firm in Breckenridge, CO.

Financial Services ‘In His Blood’
By 2003, Depping was once again looking for an opportunity in financial services and in spite of the successes at First Sierra, he thought he’d approach a new venture from a different angle. “Everyone thought I was crazy at the time, but I really wanted to do it as a bank.

“At First Sierra, we had astronomical growth and the market allowed us to grow and be extremely leveraged and then we had things like the Russian debt crisis and locked up capital. Whenever stuff like that hits, you find yourself having to fund $100 million a month. I didn’t ever want to go through that again,” he explains.

In Main Street Bank, Depping found the opportunity for the steadied funding environment he was seeking. “As I said, everyone thought I was crazy and there were days, I thought so too. With a bank, we have to deal with all of the regulators and regulations and that’s not the easiest thing. But the one thing it does provide you with is extremely stable funding … you’ve got branches and a money desk. We can be more attuned to things like how we write business that will bay us back and which are the best markets to target.”

With these clear objectives in mind, Depping and an investor group he assembled bought Main Street Bank in 2004. At the time it was a small community bank with about $20 million in assets and, as Depping explains, “a lot of good people and a very good platform we could build upon.”

According to Depping, 2005 was devoted to making sure that bank regulators understood the Main Street Bank model, which is broadly organized into two divisions: a community banking operation comprised of four branches in the Kingwood area, a northeastern suburb of Houston, along with a commercial finance company that operates nationwide.

“Most of our employees are here in Kingwood,” Depping notes, “and we have sales offices in New York, Ohio, Florida and Oregon.”

An Age of Expansion
If 2005 was a year of explaining the model to the regulators, 2006 and 2007 were years of staffing and implementing; and 2008 was a year of significant growth, primarily through the acquisition of Studebaker Worthington from New York-based State Bancorp.

“We liked what we saw when we went to look at the Studebaker portfolio … they followed the same underwriting standards that we do and we think highly of Ken Paston —  he’s worked for Studebaker for most of his career.”

And Depping reports the acquisition and the integration of the Studebaker Worthington portfolio into the Main Street Bank operation is going well. “Their volumes are pretty much where we’d expect them to be and what’s really important in today’s environment is the fact that their over 30-day delinquencies are under 1%. As far as I’m concerned —  it’s going great.”

As important as sales volumes and 30-day delinquencies are, the Studebaker portfolio had something else going for it. “We also like that Studebaker had a niche in the nursing home sector and that fits nicely with our healthcare portfolio. And in the end, that’s what our commercial finance company is really about: targeting niches where we feel we can become experts and in turn, dominant players.”

In December 2008 and literally on the heels of the Studebaker announcement, Depping and his team announced the launch of its Professional Practice Finance Division reporting to Paul Appel who created a similar group at Sky Financial. As Depping explains, it all happened on a rather quick timetable. “We couldn’t have timed that better. I’d been talking to Howard Boles over at Irwin for quite some time. Then I found out that Paul was available, so with the combination of Paul and Howard being there with a fully integrated team, it all sort of happened at once. It’s our primary focus right now … we think it’s a real winner.”

Striking the Deal While its Hot
For Depping, the community banking/commercial finance company model has afforded Main Street Bank the opportunity to strike while deals have been hot. He cites the Studebaker Worthington acquisition as an example. “One of the advantages we have is because our asset yields are so high, we are able to offer top-of-the-market rates on the deposit side, so the branch system generates tons of deposits for us.

“Aside from those core deposits, we also have the money desk and the broker CD market and the combination alleviates any concerns about funding. For example, we were able to fund the Studebaker deal in about a week and a half.”

But Depping emphasizes he and his team apply a disciplined approach when it comes to pursuing new opportunities. “We’ve walked away from a lot of stuff in the past three years, simply because the economics aren’t there. For a while, there was so much competition that the risks weren’t matching up with the return.”

Admittedly, as liquidity has tightened as of late, he’s seen some changes in that regard. Depping observes that customers are willing to pay their financing partners for maintaining solid relationships. 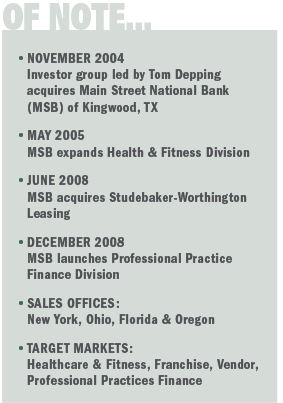 Building Muscle in the Health & Fitness Sector
The most recent Monitor Bank 50 report identified Main Street Bank’s top asset classes as recreation & fitness, IT and retail furniture, fixtures and equipment with a 60% concentration in recreation and fitness equipment. When asked about this unique approach Depping says, “Well, we’ve targeted this area because most lenders still regard the health and fitness industry as a really bad performer. We don’t think that way … we think it a big part of today’s lifestyle. And if you look at the reports from IHRSA (The International Health, Racquet & Sportsclub Association), the growth has been pretty steady for the last 20 years —  it’s gone from a fad to everyone’s doing it.”

So, what’s behind Depping’s success in this sector? He explains: “We’ve targeted specific franchises that we feel outperform their competitors based on their business models and franchise owners. And, it’s performed phenomenally for us … in 2008 our over 30s held under 1%, which is impressive given all that’s been going on. It’s going to be tough for anyone to keep it at that level and sure we may have one franchise that isn’t performing as well as the others, but for the most part, it’s done very well.”

Some Thoughts on the Future
From an industry perspective, Depping sees the chief concern will be around funding for the independent leasing companies and capital limitations for the banks. “With these concerns for capital limitations, investors are afraid to invest in the banks. And with investors staying away, the only capital available to the banks comes in the form of TARP funding. If someone had told me a couple of years ago that we’d be bailing out Bank of America and Citibank with government money, everyone would have said ‘That’s crazy!’ And we’ve all seen stats recently on recent bank losses that are absolutely frightening.”

But there is a brighter alternative for good companies experiencing signs of distress. As Depping sees it, “Some really good companies through no fault of their own are going to run into problems. And the opportunity for them will be to partner up with a bank that’s got funding, and from there be able to build origination teams.”

Ask the Expert: What is the Trajectory of the Global Semiconductor Chip Shortage?

The global shortage of semiconductor chips has had far-reaching consequences spanning multiple industries. The supply chain is fragile, priority is given to those who need the chips most and incentives are projected to be low throughout 2022. This lesson in supply and demand is not all bad news, however, as Jeff Barron of Bancorp Bank details.