Monitor 100 Demographics… Denoting a Dramatic Decade: What Does That Have to do With Destiny?

by David Wiener June 2019
The 2019 Monitor 100 showcases the leading equipment leasing and finance companies reflecting their fiscal year end 2018 data. The leasing industry has enjoyed a remarkable renaissance since the Great Recession of 2008.The 28th annual list of Monitor 100 companies reported $514.1 billion in net assets, $201.1 billion in originations and 28,666 employees.

What a difference a decade makes. Perhaps now just a fading memory, 2008 was a painful turning point within the financial industry landscape as the U.S. entered its deepest recession in 80 years commencing in December 2007. This intensified with the September 2008 bankruptcy of Lehman Brothers, a key trigger to a follow-on derivative panic and loss of confidence in commercial paper. Losses suffered in sub-prime, asset-backed securitizations cast a distrustful light on all securitization instruments including those secured by performing equipment finance transactions. Total worldwide securitizations withered to less than $10 billion a month in 2009 down from a monthly average of $160 billion in 2006. Painted to be tainted with a broad brush, the sudden absence of investor confidence collapsed the annual capital formation from all securitization products by 95% — from $2 trillion in 2006 to around $100 billion in 2009. A dramatic spike in debt costs resulted (see chart 1).

This liquidity drought-triggered recession sowed the seeds for the most tectonic plate shifts within the equipment leasing and finance industry. The impact was most significantly felt by behemoth GE Capital. Since the inaugural Monitor 100 listing in 1991 until 2016, GE Capital captured the top spot in both net earning assets and new business volume. In 2008, the GE Capital portfolio encompassed over 30% of the total net earning assets of the entire Monitor 100 listed companies.

As a very efficient source of capital, GE Capital relied on securitization to fund its equipment finance portfolio. GE-augmented portfolio returns utilizing low rate commercial paper only partially arbitraged with fixed rate SWAP instruments. With the Fall 2008 collapse of both the securitization and CP markets, GE became beholden to the Temporary Liquidity Guarantee Program (TLGP) offered by the FDIC. Intended primarily for commercial banks, this debt guarantee program (DGP) carried a costly 300 basis point rate premium. GE borrowed over $130 billion through this debt vehicle — second only to Citigroup. With a record 4,328 issuances of DGP schedules (more than twice any other financial institution), GE Capital was subsequently branded as a Systematically Important Financial Institution. 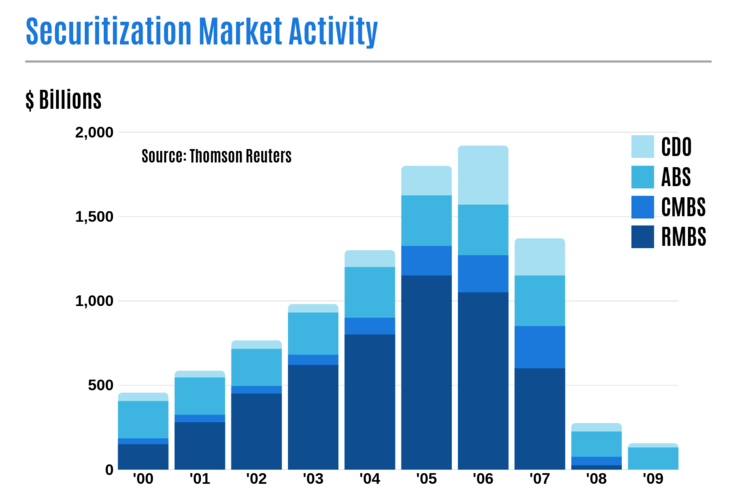 Under SIFI designation, GE was forced under the oversight of the Federal Reserve. In the years that followed, this constrained GE from continuing its entrepreneurial approach to transaction origination. The operational distraction of governmental oversight along with the added costs of these expanded internal and external regulatory controls — coupled with increased cost of funds from both DGP and loss of its coveted AAA credit rating — prodded GE to downsize, transforming itself into a captive finance organization focused on the finance of equipment manufactured by General Electric (source: CRISIS and RESPONSE: An FDIC History 2008-2013 (ISBN 978-0-9661808-1-7).

Two U.S. Bank Affiliates — Wells Fargo and BMO Harris — were the primary beneficiaries of GE Capital’s legacy businesses. Net earning assets of Wells Fargo Equipment increased 50% from the acquisition of the GE direct and vendor platforms. The BMO Harris purchase of GE’s transportation business caused its total portfolio to jump from just under $2 billion to just over $11 billion. While remaining an active equipment finance firm as a Captive, GE no longer participates in the Monitor 100. In the absence of the once-dominant GE Capital, bank-owned leasing companies saw their share of the equipment leasing market rise to new levels (see chart 2).

In addition to GE Capital, several other equipment finance firms no longer appear in the Monitor 100. Those among the top 50 in 2009 that have disappeared from the chart include: Independents — International Lease Finance, Ryder US Fleet Management, Financial Federal and Tygris Commercial Finance; U.S. Bank Affiliates — BNY Capital, Capital One and Norlease and Captives — PACCAR, Siemens, Daimler Truck, Verizon and Microsoft. The reasons for their departures vary. 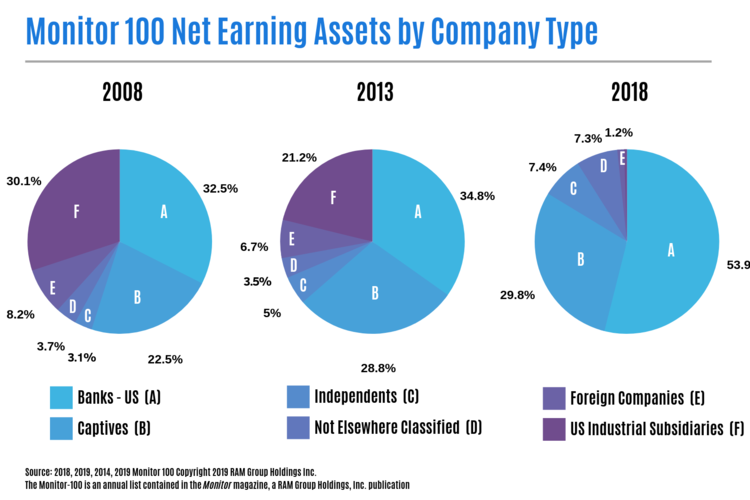 Previously listed U.S. Bank Affiliates have generally elected to exit stand-alone equipment finance platforms. Independents have either been acquired or sold off their portfolio. While a few Captives have elected to shift their equipment finance activities to third-party vendor finance providers, several other Captives have simply elected to no longer be listed in the report. If these Captives continued to participate in the Monitor 100 listing, their market share may have come even closer to rival that of U.S. Bank Affiliates (see chart 3).

Conversely, many new names have appeared among the Monitor100 since the U.S. economy emerged from the Great Recession. A new breed of Independents like Air Lease, Stonebriar, Ascentium and SQN have entered the equipment finance space — each offering a distinctive go-to-market strategy. New commercial banks entrants arrived as they created equipment finance platforms to deploy otherwise underutilized deposits. And several operations — Bridge, Eastern Funding and Navitas — represent former Independents that were acquired by U.S. Bank Affiliates (see chart 4).

Comparing new business volumes of leading originators in 2007 (just prior to the Great Recession) against 2018 (the most recently completed year) reveals a clearer contrast of the changing industry landscape (see chart 5). 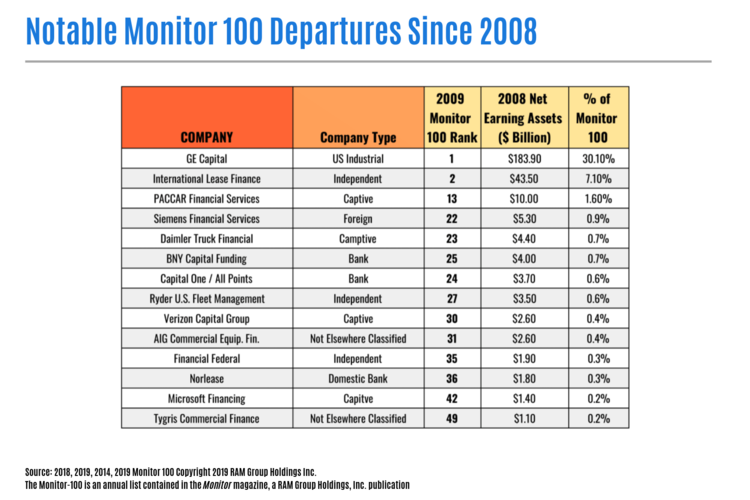 The top 10 U.S. Bank Affiliates extend their domination with total share of new business volume growing from 20% in 2007 to 32% in 2018. Though the reason for their departures vary, several banks on the 2007 leaderboard have dropped off: CitiCapital is no longer an active lessor, and Wachovia and National City have been respectively acquired by Wells Fargo and PNC. Origination volume of the top two — Wells Fargo and Banc of America — have more than doubled in the past 11 years. People’s United Equipment Brands makes its debut among the top 10 bank list this year from the past acquisitions of Financial Federal, LEAF Commercial Capital and Vend Lease — to be further solidified by its 2019 acquisition of VAR Technology Finance.

In an extended era of a remarkably low federal funds rate, banks enjoyed an extremely competitive cost of capital which fueled their appetite for growth. To augment limited organic originations, many U.S. Bank Affiliates have made a more concerted effort to acquire available Independent leasing platforms.

The top 10 Captives saw their share of originations jump from 29% in fiscal year 2007 to 37% in fiscal year 2018. During the liquidity-crisis-fueled Great Recession, Captives defended their top line sales by financing a greater portion of their manufactured products. As the economy stabilized and banks resumed a competitive position offering extremely low rates reflecting thin spreads, some Captives conceded financing to banks establishing vendor program arrangements (see chart 6).

While Independents did not appear to fare as well as U.S. Bank Affiliates and Captives in terms of origination market share, the underlying reasons are not apparent.

Several of those Independents among the top 10 in volume pursued stable access to capital by becoming banks (CIT and Marlin). Several were acquired by banks (Financial Federal and U.S. Express). One was acquired by a foreign company (CSI). While there appears to be a much lower origination volume market share among the 2018 Top 10 Independents compared to 2007, a renaissance of young and growing Independents have appeared in Air Lease, Ascentium and Stonebriar, complementing the stable presence of Great America and GATX.

Since the turn of the century, the majority of equipment finance transactions have been sourced at the manufacturer dealer point of sale through a combination of captive or vendor finance programs. The liquidity drought experienced at the inception of the Great Recession of 2008-2009 created a void of available capital. Coupled with the fear of the unknown, this triggered a consequential flight to quality by U.S. Bank Affiliates and Independents in a conservative deployment of their limited lease products. This propelled Captive finance organizations to more intentionally facilitate equipment sales through an expansion of their internal finance program offerings. In the early stages of the economic recovery, over 50% of all equipment financings were conducted through Captive finance. As the economy has matured, Captives have yielded some of their finance market share in the face of ample liquidity and thin spreads hovering at a third rather than half of the total market. Yet, the combination of captive and vendor programs still represent the dominant origination medium. The typical end-user makes equipment financing decisions at the point of sale. 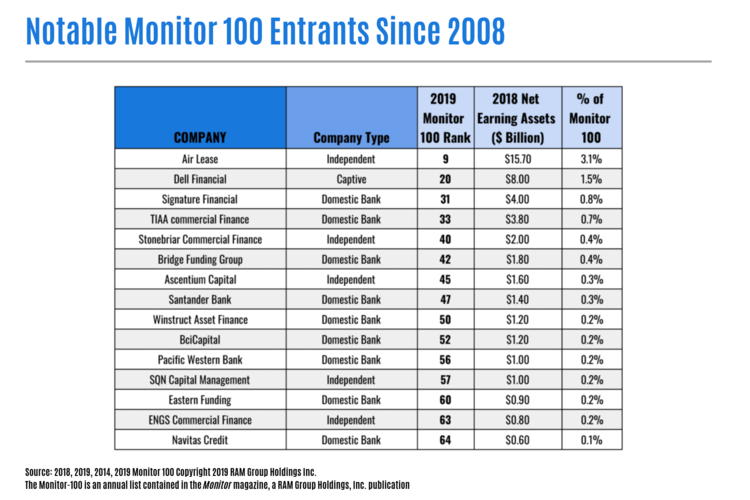 So what is the likely future of the equipment finance landscape? U.S. Bank Affiliates, with low cost of funds, will continue to be dominant within equipment finance. Captives, with channel control, will also maintain market share — though parent treasury leadership may control the quantity of capital allocated to the Captive — abdicating some market share to other low rate competitors. While Independents boast a more nominal market share, operating in the shadows of U.S. Bank Affiliates and Captives, they have historically proved themselves to be the most nimble and creative. Absent the cost of capital advantages of Captives, with parent treasury access, and U.S. Bank Affiliates, with low-rate depository funding, Independents compete on everything else — but price. And if they do not have a competitive advantage in a particular space, they do not compete.

In the midst of the recession, Captives controlled their destiny, stimulating sales through captive finance sales programs rather than relying on struggling banks and independent lessors. 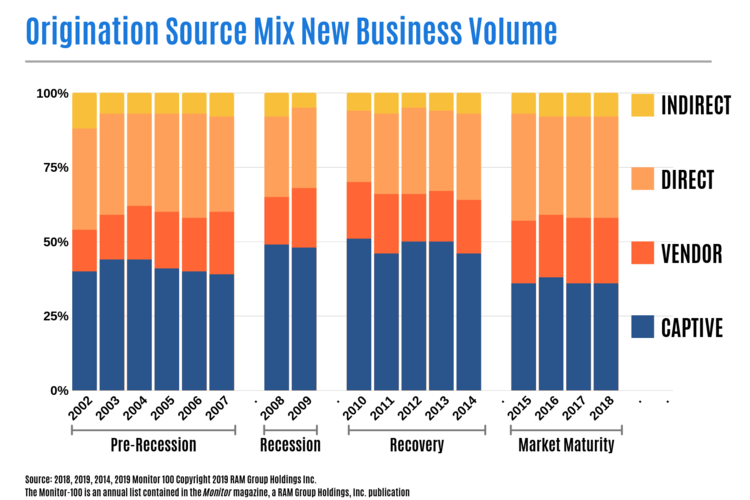 What can happen when a company loses control of its destiny? I heard a former Assistant U.S. Department of Commerce Secretary say, “Rue the day when one calls upon the government to be their partner.” Companies forced to seek government support in the midst of the 2008 crisis became subjucated to rigorous government oversight. Wachovia was obligated to seek a buyer. Branded with the “SIFI” designation, GE Capital soberly experienced the stranglehold of governmental audits and portfolio scrutiny overnight. This confiscated GE’s hallmark nimble non-bank approach to equipment finance and ultimately drove it to relinquish its equipment finance activities for all but equipment that included GE-manufactured content.

A quarter of a century ago, Noel Tichy and Stratford Sherman published a seminal text book on the art of mastering change. Tichy — the former director of GE’s Crotonville executive training center — imparted six principles that governed GE leadership at the time. One of these became the book title, Control Your Destiny Or Someone Else Will. The successes and stumbles of equipment finance companies — including GE which birthed this dogma — can be validated to the extent that they were able to lead instead of react.

This tenant holds true in our businesses corporately as well as in our personal life and career. Control your destiny or someone else will. Do you? •

One Reply to “Monitor 100 Demographics… Denoting a Dramatic Decade: What Does That Have to do With Destiny?”

Great article – thanks so much for posting it!