Rebounding From a Sluggish Start: The Evolving Equipment ABS Market

by Rita Garwood Monitor 100 2016
In an interview with Monitor, BMO Capital Markets Director Jeff Merchant provides an overview of the equipment ABS market. Though the market has rebounded from a recent drop, volume levels are expected to be down year-over-year as it evolves due to less activity from larger players.

Like many in the equipment finance industry, the equipment ABS market is adjusting to the realities of a world without GE Capital. BMO Capital Markets Director Jeff Merchant sees a shift as the ABS activity of larger players has tapered off while small independent companies are accessing the market more frequently.

The second half of 2015 saw a drop off in ABS activity. Historically, Merchant says, the equipment ABS issuance calendar has been front-loaded, but the changing landscape of the ABS market contributed to this drop. “Captives accounted for approximately 63% of issuance in 2015 from a dollar volume perspective. However approximately 61% of the number of deals came from independent, specialty finance companies.”

With a growing number of smaller players in the space, deal size has been shifting as well. “The non-captives typically issue smaller deals in the $100 million to $300 million size,” Merchant says. “In addition, volatile financial markets and the ABS spread widening experienced in the second half of 2015 may have kept some potential issuers on the sidelines.”

The decline in ABS activity continued into 2016, which got off to a sluggish start. In the first quarter, there was approximately $38 billion of issuance volume versus approximately $54 billion during the same period in 2015.

So far, the second quarter has been more active, with four equipment ABS deals coming to market. In April, Ascentium Capital came to market with a $237 million deal. May has seen three new deals, including a $787 million large-ticket deal from MassMutual Asset 100Finance, a $343 million small-ticket deal from LEAF Commercial Capital and an $862 million deal from CNH Industrial. This was the second 2016 transaction for CNH, backed by mid-ticket assets such as agricultural and construction equipment.

Overall, although Q2/16 issuance volume has picked-up, Merchant expects end-of-year volumes to be down on a year-over-year basis when compared with 2015. “GE has exited the market, and issuers such as Kubota and Dell have yet to bring a deal in 2016,” Merchant notes.

“One of the major drivers for the expected decrease in equipment ABS issuance volume in 2016 is the exit of GE as a sponsor in the asset class following the sale of their transportation finance business to BMO as well as their lending and leasing business to Wells Fargo,” Merchant says. GE came to market in 2015 with only one transaction, which was via its transportation shelf, versus three transactions in 2014 — one from each of its three shelves (small-ticket, mid-ticket and transportation).

Thanks to the growing number of smaller issuers, ABS investors have developed a greater acceptance of transactions supported by leases and loans to middle market and small business obligors.

“Historically, small businesses have accounted for the bulk of the obligor base in small-ticket equipment ABS,” Merchant says. “With the independent, specialty finance equipment lessors accounting for a larger percentage of ABS transactions by number of deals relative to captive finance companies, the underlying obligors are increasingly concentrated in small- and mid-size businesses, which are the target borrowers for these originators. In conjunction with some of the more recent large-ticket transactions, larger rated companies have become part of the obligor base as seen in deals such as those brought by MassMutual and Macquarie, in 2015 and 2014, respectively.”

Despite the increase in the number of issuers, Merchant says captives typically receive strong investor interest and are considered benchmark issuers in the equipment ABS asset class. “The frequency of issuance and generally larger size of the transactions improves the perceived liquidity, which is a driver of investor receptivity,” Merchant says. “Further, captives are typically publically traded and rated companies that investors are familiar with.”

While equipment types vary by issuer, depending on the underlying originator’s niche, Merchant says equipment type is generally not a driver of investor interest. He adds that typical equipment ABS structures are similar across issuers, with senior/sub, sequential pay transactions accounting for the vast majority of issuance. However, less seasoned issuers typically feature structures with full turbo amortization as opposed to cash release.

“There has been a lot of private equity money coming into the space post-crisis. The equipment leasing market is fairly competitive at this point,” Merchant says, adding that he expects limited new issuers to enter the market this year. “I’m speaking from a securitization perspective; there are established platforms out there that may or may not be a first-time issuer this year.”

Regardless of issuer, equipment-backed ABS spreads have been widening. “Spread widening is expected to be moderate with tightening expected over the remainder of 2016,” Merchant says. “However, spreads are expected to remain elevated relative to the levels in 2015.”

Spread widening has been driven by macroeconomic factors as opposed to credit risk factors specific to equipment ABS. Merchant indicated that while the market’s tone has improved since early 2016, and markedly in the second quarter, spreads remain wider on a year-over-year basis.

“Market tone across asset classes has really improved over the last four to eight weeks,” Merchant says. “Broadly speaking, ABS deals have been well received. A lot of them have priced inside of initial price guidance. Some have even been recently upsized. The market tone has improved for ABS in general.”

With respect to equipment, Merchant says the tone has also improved, despite the fact that the recent LEAF and MassMutual deals priced wide of their issuances in 2015. “Both of those deals priced wider on a year-over year basis” he explains. “That said, the expectation is that, for both of these transactions, execution was better than it would’ve been six to eight weeks ago.”

Merchant expects the market to continue improving throughout 2016. “There’s a favorable supply demand dynamic in the market right now whereby issuance levels are down $20 billion or so year-over-year, so there’s money from an investor perspective to be put to work and a lack of supply.”

Despite this positive outlook, Merchant says equipment ABS accounts for a relatively small percentage of the overall market and is therefore subject to broader market conditions. “While we do expect spreads to continue to improve over 2016, I don’t think anyone in the market is expecting them to improve to a level of where they were a year ago,” Merchant says. “They’re improving from post-crisis wide levels at the beginning of the year to levels that were still wide of last year, but not as wide as they were at the beginning of the year.” 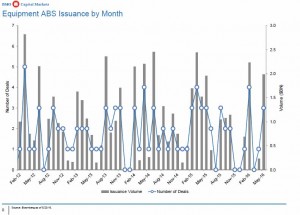 Merchant expects increased issuance volume for the remainder of 2016 as the market stabilizes and the historically front-loaded issuance calendar partially shifts to the second half of 2016. “While volumes are expected to be down on a year-over-year basis, we feel that equipment ABS offers investors a solid value proposition as it offers a yield pick-up to the benchmark asset class — prime auto — while featuring a similar risk profile given the structural and collateral performance similarities to prime auto ABS,” Merchant says. “Notwithstanding the broader economy, equipment ABS has historically performed well.”

If origination volumes do increase, Merchant expects existing issuers to access the term ABS markets to fund these assets. “ABS continues to be a viable funding source for equipment loans and leases as it provides funding diversification, asset/liability matching and efficient cost of funds.”