A Conversation With Andrew Corsi, SVP & Manager of Leasing 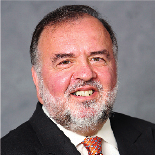 With the bank-wide motto, “Our doors are open all the way to the top,” Sterling Bank Leasing knows it’s all about customers’ needs. By focusing on the things it considers most important — maintaining a strong mix of talented employees and paying utmost attention to supporting the needs of its business partners — Sterling re-entered the Monitor 100 this year at #85.

Sterling Bank Leasing, a division of New York-based Sterling National Bank, was started in 1994. The bank itself, founded in 1929, has specialized in servicing small to middle-sized businesses.

Sterling Leasing provides leasing and other types of financing including purchase acquisitions, debt participation on leveraged loans and sales/leasebacks. The division has a customer base of firms with revenues of $1 million to $25 million in a wide array of industries.

Andrew Corsi, senior vice president and manager of the division, describes Sterling Leasing as a “boutique bank offering all of the services of our larger brethren but with far more personal attention.” The bank’s motto, he says is “truly what we live by.”

Corsi came to Sterling in late 2006 after experience as chief credit officer most recently with Wasco Funding, a subsidiary of European American Bank, which was sold to Citibank, and Independence Community Bank, later purchased by Sovereign. In December, Sterling named Corsi to his current position in which he is primarily responsible for extending the bank’s growth in equipment leasing.

Customers First
While all lenders acknowledge that “time is of the essence” as one of the principal drivers of the industry, what he believes will drive Sterling Bank is personal service. “There’s no lack of competent funding sources… We believe customers choose us, certainly not because we’re the biggest, but because they know their voice will be heard. Our approach is always one of how can we help them be successful.”

Obviously rate is a major component of the industry and while there is, as he calls it, the rate game, Corsi says. “At our end of the business, we decided, we’re not going to play that game … for us it’s the personal service…

“We are never going to win the business of our clients based on having the lowest pricing, but a competitive rate supported by a consistent approach to doing business that does not change with each prevailing wind, is the basis of the relationship building that we focus on,” he explains.

The division proved to its customers it was listening when a few months ago it began doing business in Hawaii and Alaska — areas, which weren’t in Sterling Leasing’s footprint before that time. “Some of our customers on the West Coast said: ‘We have business in Hawaii but you guys won’t do it.’ ”

When he asked the reasons why, Corsi was told that location and time differences were major factors. Not willing to accept this response, he says, “Last time I heard, Hawaii is actually part of the U.S., so now we do it… By listening to our West Coast-based customers, we found a way to get this done and gave our customers another tool to help them be successful. 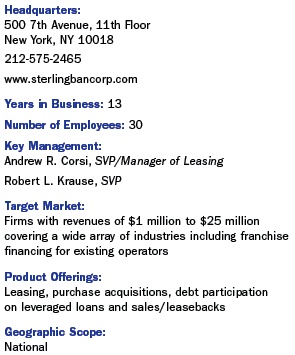 “We have a tremendous pool of business experience in our group and we draw on that experience to better respond to what the client’s need is at that time. There’s no point in my telling them what we can do if that doesn’t work for them. At the end of the day, it’s listening to what they want and need, and then finding a way to try and get it done that counts,” he explains.

“I strongly believe that people come to us, people choose us and a major piece of that choosing is because of the fact that [customers] are getting an ear,” he says.

Putting in that extra effort has driven Sterling Leasing’s business up by 7% from 2006 to the present, Corsi says.

Another area of growth for the division is a new product that it had not been active in before. Sterling has added the ability to do franchise financing and the response from its customer base has been very positive. According to Corsi, “I’ve had great success doing franchise financing in the past and have brought the product to Sterling Bank… People are very enthusiastic about it. It gives the company a new and exciting avenue of business.”

The Greatest Challenge
Expanding into a new focus offers many opportunities for the company, but also reminds Corsi and Sterling Bank Leasing to stay focused on knowing the customer and knowing the product, all in an effort to avoid fraud, which has become a growing concern in the industry. “I honestly believe that guarding against fraud is one of the biggest challenges in our industry,” and it will continue to be, Corsi says.

“We’ve always got the challenge of rate and the challenge of credit risk. But guarding against fraud is getting even harder,” he notes, and adds that Sterling has experienced its share of being the victim of unethical customers and business practices.

“The people who want to perpetrate frauds have more tools, more technology and are far smarter than they used to be. So I think it’s incumbent upon us, as an industry, to really focus on protecting ourselves as best we can and sharing with each other information about these things — by making that kind of information available to each other.”

In the meantime, he says, perform due diligence and really get to know what types of companies and products you’re getting into. “All of us, at one point or another, have been asked to do some unusual financing, and we need to make a great effort to understand the business they are actually doing,” Corsi says. “I would say a good portion of the frauds we got into — this applies to Sterling and the industry — could probably have been avoided by having a better knowledge of the customer and the product we were financing.”