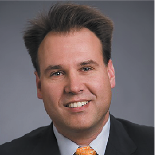 What happens when you take one captive leasing company, four leasing professionals, truck-mounted fuel delivery tanks and shake them up with a divestiture? Well, if your answer is independent lessor, Sunbridge Capital, you’d be — as the British say — bang on.

Adrian Weber, president and CEO of this Mission, KS-based independent leasing company begins by saying, “Our company has an interesting background.” That history began when four leasing professionals met at NRL Financial in the late 1980s. At the time, NRL was the captive leasing company for Garsite, a manufacturer of truck-mounted tanks designed to transport home heating oil and other fuel.

When NRL was sold in 1995, three of the professionals managed to stay in touch in some form or fashion. So much so, if fact, the three — which, at the time, didn’t include Weber — went on to establish Commercial Leasing Corp. (CLC) in 1997.

The CLC partners were using their platform to broker transactions, and in what turned out to be a key, the three resolved to build a portfolio. “They wanted to build a portfolio,” Weber recalls, “rather than a golf cart business, where your foot is always on the gas to make it go.” With his past experience and his familiarity with the partners from the days at NRL Financial, Weber seemed to be the perfect fit. In 1999, he joined the CLC team.

Declaring War
As time passed, CLC had developed primarily into a vendor-based business operating as the F&I group for manufacturers. By 2002, the CLC partners recognized that through the consolidation of the leasing industry, it was becoming more and more difficult to compete for business without some form of differentiation from their competitors.

In 2002, the four re-examined their business from the inside out, and in what could be seen as a surprising move —  the company declared war on itself. The owners set forth goals to bring CLC to the next level and developed a prioritized task list of required actions. The ownership and management group ran with various components of the plan.

CLC took a hard look at its originations platform with the desire to extrapolate the platform into a much larger machine. As a result, CLC took its collective knowledge and experience and developed a proprietary originations platform. This course of action and the ensuing outcome gave the company greater flexibility in all of its functions and provided its customers with a much greater level of service. And, by developing its own system, SunBridge Capital — which re-branded itself in 2005 — could mold its new originations platform to both its own and its customers’ needs.

SunBridge continued to look at the world differently and eventually decided to originate through the equipment leasing broker community and at the same time, kept an open mind to vendor-based business as well. It took a look at its credit decisioning tools. Not surprisingly, SunBridge took a similar course with credit decisioning as it did with its origination platform and developed its own scoring model, based on its own experiences and needs.

With these key components now in place, coupled with what Weber describes as the company’s “intense customer focus,” the close rate on transactions propelled. Weber explains, “The success came from providing efficiency to SunBridge’s broker community. For example, our Term Builder is a Web-based tool with which brokers freely structure the terms of a deal within certain parameters.”

And the Term Builder tool is just one of many aspects that illustrates SunBridge’s commitment to customer-based innovations. For example, the company conducts webinars for its brokers with the purpose of training them to be more effective and efficient in their own marketing efforts and continues to develop software applications for broker purposes.

Weber describes himself and his fellow owners as “idea mongers.” “We’re always fishing for ideas from our staff,” he explains.

Indisputably Victorious
Obviously, the examining and re-examining paid off in the end. SunBridge Capital joins the ranks of this year’s Monitor 100 companies occupying the #86 space. In addition, the company’s net assets grew more than 91%; with new business volume up 93% over the previous year. 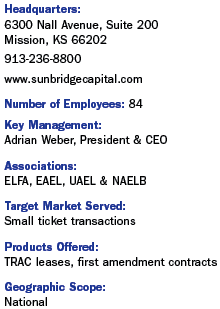 “What I feel good about mostly is that it’s all been organic growth and didn’t come from adding asset classes or new products… We maintain a narrow focus and that provides us with great optimism as to what the future holds for us and what our company is capable of when we do bring on new products,” Weber says.

When asked about what distinguishes SunBridge Capital from it competitors these days, Weber sums it up by saying, “I think it’s four things — analytics, technology, our marketing efforts and our human culture.”

And when it comes to attracting and hiring talent, SunBridge employs a somewhat rigorous screening process. “We’ve been very successful in growing our staff and using talent we’ve found in the region,” Weber notes.

Through the use of a fairly intensive screening process, which includes both a series of interviews and tests, candidates who eventually come on board have more than a clear sense of what to expect as they embark on their career at SunBridge. Once there, employees are developed internally through the use of a strong training program that orients employees to each area within the company.

Looking to the rest of 2007 and into 2008, Weber says the company will stay focused on one thing: the quality of service it delivers to its customers, striving to enhance the productivity of its brokers as well as to continue to hone SunBridge’s efficiency.

Commenting on the industry as a whole, Weber — like many leasing executives — sees the current environment as an interesting time for lessors. “The availability of capital won’t remain at these current high levels indefinitely … credit is bound to tighten and we’ll see decreasing interest rate markets, and competition from local banks.”

But in the end, Weber says neatly, “We love being in the leasing business.”

One Reply to “Sunbridge Capital”

Understanding the Value of Having Boots on the Ground: Conducting Asset & Liability Investigations on Defaulted & Past Due Customers

Equipment financing and leasing companies could be finding several more productive ways to gain insight about their defaulted customers.