by Stuart P. Papavassiliou July/August 2008
Without question, we live in times best characterized as rapidly changing — it could be said we live in an age of velocity. And, as most in our industry would acknowledge, the leasing world is no exception to this dynamic. It might not be surprising, therefore, that in the spring of 2007, a group of seasoned information technology (IT) leasing professionals announced the formation of a de novo independent leasing company named Velocity Financial Group.

Information technology leasing veterans Frank Cirone and Jan Haas, both former executives of Comdisco, Inc., serve as CEO and president, respectively, of the company they co-founded just over one year ago. “I joined Comdisco in 1984 and was there for about 20 years,” Cirone recalls. “I spent about ten of those years in senior corporate finance roles with the company in the U.S., Canada, Europe and Asia … it was a great experience.”

Following his years at Comdisco, the legendary IT leasing and debt venture firm that achieved Fortune 500 status in the 1990s, Cirone reunited with Haas and John Vande Moore, Velocity’s CFO, forming an investment fund focused on acquiring and originating lease and venture loan assets.

“By 2006, we were watching the market dynamics and many of the independents were exiting the space. We thought it might be a good time to build out a bigger franchise — a formalized operation in the leasing space,” Cirone explains. And then the fundraising effort began, which Cirone describes as an interesting process. Enter American Capital Strategies a publicly traded alternative asset manager that provides equity and senior debt financing to companies in all stages.

“We closed a transaction with American Capital Strategies as our lead sponsor,” Cirone says. “They share our vision in the space and have the financial wherewithal and ability to back us, along with the patience needed to build out a business like this, especially in its startup phase.”

With funding in place, Cirone and Haas announced the launch of Velocity in May 2007. The veterans formed the company within a traditional C-corp structure with a firm resolve to not expand their forces or book any transaction until such funding was firmly in place. But was it the right time considering the dramatic turn the capital markets were about to take by July of the same year?

Cirone explains, “Well, hindsight always makes things a bit easier and if you rewind the tape back to 2005 and 2006, the capital markets were pretty robust. But for us, it really wasn’t about the capital. We had looked around the market and noticed that many of the medium-sized and larger independent leasing companies had exited the market. The banks had taken on a much more dominant position and the manufacturers had captured much of what these independents had left behind.”

“When we looked at that landscape, we saw a lot of small- to medium-sized leasing companies that continued to churn away attempting to build customer opportunities. But many of those companies were undercapitalized. We saw fragmentation in the middle market and the independent leasing space and thought this would give us an interesting opportunity to build an operating leasing company and a franchise with long-term sustainability. From a strategic perspective, it was the right time.”

Structurally, Velocity is headquartered in Chicago while the venture division is run by Haas out of its Boston office. Aside from the Chicago and Boston offices, the company has offices in Colorado, Texas, California and North Carolina. And in keeping with its name, Cirone notes that Velocity has an aggressive expansion plan in place with its eye on opening several other offices throughout the U.S.

And Velocity’s approach to geographic coverage follows logically. “I’d say we’re predominantly in the U.S. and we’re doing some cross-border transactions in the Canadian market as well,” Cirone says. “We have our hands full here and the continued weakening of our currency makes it somewhat difficult to invest outside of the U.S., but of course, that will change. We do look at opportunities with our customers where they bring us along and we try to accommodate those transactions. Our credit team has deep experience in doing business abroad and if we can help — we’re there.”

Understandably, much of the top talent at Velocity can be traced to professional relationships made at Comdisco. “Jan comes from a traditional credit-trained investment banking background and he eventually became a leader in the venture business at Comdisco,” Cirone says of his co-founder. “He has a great deal of experience in the market and has created a very strong presence in the venture space,” he adds.

Vande Moore joined Velocity as a member of the founding team and was named chief financial officer in April of this year to oversee the firm’s accounting, treasury, financial and operational functions. “John brings us a variety of experiences not only from his time at Comdisco, but also from his time at GE Capital and Life Fitness in senior financial roles,” Cirone notes.

Aside from the founding team, Velocity’s executive management includes Charles Neff, chief credit officer, who Cirone describes as “a key cornerstone in our business who has helped build our disciplines in risk management policies around credit. Charlie brings us 20 plus years of experience and subsequent to his Comdisco experience, he was chief credit officer at Key Equipment Finance.”

To round out the team, the Velocity executives deemed it critical to bring in experienced in-house legal talent, a function that a company might outsource in its initial stages. “For us,” Cirone says, “this is a critical part of our business. After all, if you can’t document transactions properly, you’ll probably wind up in some tough situations. But most importantly, building out the capital structures has certain complexities associated with it — you have equity partners and senior debt partners. It’s important to have someone with really deep strength in-house.”

With that in mind, the Velocity team brought in James Anderson as its chief legal officer. “Jim and I knew each other when he was an associate at Skadden Arps,” Cirone explains. “After that, Jim was a partner at a local law firm and we got to know him really well there. He’s an incredibly valuable member of our team.”

Key to the underwriting process is Matt Dunagan who is responsible for managing residual risk for Velocity’s portfolio in all stages of the company’s transactions. “We’re in a volatile market today and if you’re not managing risk, you’re doing yourself a disservice. This was one of the biggest lessons I learned from my years at Comdisco, along with the importance of developing a very strong culture of customer orientation and the importance of surrounding yourself with a quality team.” 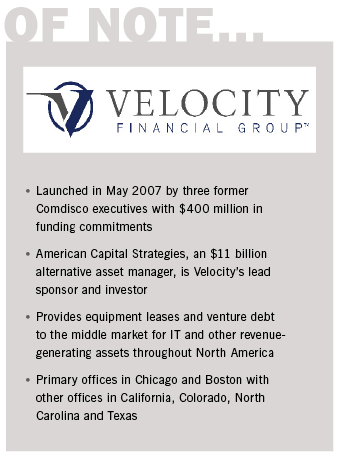 And Velocity’s approach to the market is undeniably tied to the “schooling,” as Cirone describes it, he got at Comdisco. He recalls, “It was a unique place and I’d venture to say it was the premier independent technology leasing company in the world. At one point, Comdisco had some 3,000 employees and was synonymous with technology leasing.

“I credit Ken Pontikes as the founder of a company that proved to be the best training ground I could ever ask for in the IT leasing space. The company was creative and had an incredibly entrepreneurial culture that permeated throughout the entire organization. I had the good fortune to work with really talented individuals, frankly the likes of which will never be assembled again in the space.”

And it’s this focus on assembling the best team possible that is central to Velocity’s strategy of building the business through organic growth. “We’re looking to grow our business on average of about 30% in terms of new volume origination increases,” Cirone says. “To meet those objectives requires us to attract and retain quality talent — and that’s probably the hardest part of the job.”

And Cirone admits, that while the company started with deep experience in technology leasing, it quickly learned that there were other opportunities to expand its involvement within its customer base with other infrastructure assets like manufacturing equipment, processing equipment, material handling equipment and other revenue-producing assets. While built on a direct selling model, the company sells its services from a combination of perspectives. “We sell on a direct basis and we also leverage relationships with resellers that are in our space. We also look for others who might be willing to partner on a transaction,” Cirone explains.

When asked about the uncertainty in today’s economic environment, Cirone says, “Clearly we’re in a cycle, but I think this one is interesting in that it’s global in nature and there are multiple factors driving things today. Put it all together and we’re in for interesting times for the rest of 2008 and into 2009.”

“I think this is probably the most interesting time in decades to be in the independent leasing space. If you look back at the last few years, being an independent was tough and pricing was very competitive, from the cost of capital as well as on residuals. I think both of those things have changed dramatically. The pendulum has swung far to the left and then to the right, but I’m confident things will normalize in time.”

What’s been the impetus to stay in the leasing business these 24 years? Cirone boils it down to the fun and the good fortune to work with committed and talented individuals. “For me, this is really fun. Sure it’s challenging, but if it weren’t fun, I wouldn’t be doing it anymore. You know, we have embarked on virtually uncharted waters from a capital market perspective and we certainly didn’t predict these conditions. But it’s a time that’s ripe with opportunity for us and I feel great about that,” Cirone notes.

On the personal side, the dyed-in-the-wool Chicagoan has been married for 27 years and is a father of six with the youngest approaching the high school years, the oldest pursuing postgraduate work and a set of twins in the middle. “Sure it’s a lot to manage, but my wife does a terrific job. And if the truth be told, it’s probably the real reason I work so hard. My family keeps me going and I feel blessed in that regard… I pinch myself everyday.”