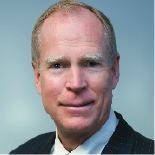 To say Charles F. Willis IV knows the aviation business from the inside out would not be an understatement. At 58, the founder and president of Willis Lease Finance has done just about every job imaginable around airplanes — from cleaning them, to flying them.

In fact, it wouldn’t be a stretch to say aviation is the Willis family business. His father, Charles F. Willis, Jr., who died in 1993 and is buried at Arlington National Cemetery, was a decorated WWII Navy pilot and served as the chairman and CEO of Alaska Airlines from 1957 until 1972. As a result, a young Willis practically grew up on the runways, tarmacs and machine shops of the company’s Seattle headquarters.

In 1972, after his father stepped down from the helm of the company, Willis moved on to Seaboard World Airlines where he served a brief stint as assistant vice president of sales before launching the Charles F. Willis Company in 1974. That company soon morphed into his current venture, aircraft engine lessor Willis Lease Finance Corporation. The company began trading publicly in 1996.

Willis says there is no doubt his background has offered him a unique view of the aviation business. “I worked in all aspects of the airline business and it helped to have a really broad perspective of how an airline operates and the factors that go into the decisions that are made,” he says. “I think that’s helped us tremendously in understanding our customers better.”

Early on, Willis dabbled with the thought of leasing aircraft, but quickly abandoned the idea in favor of engine leasing. Today he has no doubt he made the right decision. “At the end of the life of an aircraft, you can determine its value by the worth of its engines,” he says. “That should give you a good idea of where it’s best to be in the food chain — you really want to be in engines.”

Within a short time, Willis had built himself a small empire in what is essentially a niche market. What started in the mid-1970s with one engine has now grown to become the preeminent independent engine lessor, competing favorably with such giants as General Electric, Pratt & Whitney and Rolls Royce.

But since his company’s portfolio includes engines made by all three, as well as others, Willis says that, unlike his rivals, he is able to be all things to all people. “We’re very different from our competitors because they usually specialize in their own engine types, but we cross all product lines,” he says.

Willis admits that running a multi-million dollar venture with his name on the shingle has raised the ante a bit, and right or wrong, every move the company makes — by virtue of its name — is often a direct reflection of Willis personally.

It’s a challenge that for years Willis says lent to his tendency for micromanaging, a trait he has since moved away from. “I think I’ve been much better in the past few years in delegating,” says Willis. “Now, I tend to stay in the background unless there’s a problem. As the company gets larger, it needs good solid professional management and I’ve brought people in to do that.” 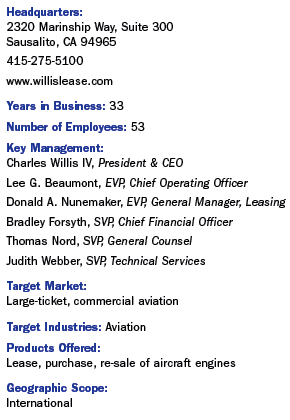 Still, he says he prefers to hire executives with backgrounds similar to his own. “I look for talent in the aviation industry,” he says. “I find that it’s far more important to have a good understanding of the asset rather than just looking at it from a financial perspective. When things go bad, it’s not enough to understand a balance sheet; you need to understand why things went bad.”

As a relatively small independent among major players, Willis has developed a knack for innovation that enables his company to prosper. In 2005, the company undertook what it calls the first ever securitization of a pool of leased aircraft engines when it closed the Willis Engine Securitization Trust (WEST), selling $228 million in term notes.

But his most distinguished initiative has been the creation of an engine “pooling” program that is being employed by Willis Lease around the world. Willis says roughly 90% of the airlines in China are currently participating in the program, under which the company and the airlines pool their engines together and lease from each other.

“It’s a way to make the market more efficient,” explains Willis. “Engines can literally be rented in a matter of minutes. This is something that has not been done on this scale before and I think it will be the wave of the future.”

As a supplier to a major commercial sector, Willis says that moving forward, he will be keeping a watchful eye on the fluctuating economy. “We’re a very interest rate sensitive business,” says Willis. “As the economy goes, so go interest rates and so go aircraft deliveries. In an up market, everyone orders airplanes, but if everything goes down, people cut airplanes. You need to be careful.”

Willis is reticent to share his thoughts on the future, citing the perils of being a public company for his reluctance to make predictions. But he will say the company is growing, and plans to stay on that course.

“We’re continuing to update our portfolio as time goes on. We’re enjoining a considerable amount of liquidity in the market right now and access to capital has never been better,” says Willis. “We’re taking out old engines and putting in new engines. The new engines we’re putting in are ones that reflect the highest and the best cross section of customers for that engine type. This year we’ll put on a substantial number of engines.”