In February of this year, BB&T announced that Tom Jaschik would succeed Joel Rutledge as president of BB&T Equipment Finance. In the following, Jaschik shares his vision for the future.

As a result, the year 1990 marked the formation of Sanwa General Equipment Leasing, which was a subsidiary of Sanwa Business Credit. Jaschik’s time with Sanwa drew to a close when he and his colleague, Ed Dahlka, were approached by LaSalle Bank in 1996 to expand its middle-market leasing company, LaSalle National Leasing Corporation. Jaschik explains, “There were a number of us from Sanwa that went to LaSalle and many of us were still there until we were sold to Bank of America at the end of last year.

“Basically, I’ve been involved with starting two leasing companies from scratch: one for Sanwa and the other for LaSalle National,” he adds, “and I joined BB&T in January of this year.”

On February 5, 2008, BB&T announced Jaschik’s appointment as the new president of BB&T Equipment Finance succeeding industry veteran Joel Rutledge, who had been with the equipment finance unit since 1992. Jaschik says, “BB&T has a stellar reputation in the marketplace with a footprint that runs from Maryland south to Florida and east of the Mississippi. It’s a regional bank with about $136 billion in assets and a leasing company that’s small given the overall size of the bank.”

Holding at #58 in this year’s Monitor 100, BB&T Equipment Finance reported net assets of $812 million at the close of last year. The unit experienced 9.7% growth in 2007 primarily due to activity in its vendor financing program.

According to Jaschik, “What drew me here was the desire of the bank’s management to move the leasing company beyond its regional footprint as well as change its direction from a small-ticket shop to a middle-market and a large-ticket shop. Before now, our average deal size was probably about $80,000 and our annual volume hovered around the $350 million range.” He notes that this new direction for the equipment finance unit stems from one very basic reality: the importance of meeting and serving the needs of the bank’s clients. “BB&T has grown,” he states, “and so has the size of our business client. The small-ticket product can’t meet the needs of the clients we want to serve.”

Jaschik notes that in order to transform the business from a small-ticket shop to a middle- and large-ticket shop, it’s necessary to fortify the sales force. “Currently we have 13 sales representatives on the small-ticket product and we’ve brought three people on board for the large-ticket product. By the end of this year, we’re looking to grow that out to perhaps six people. And as we expand beyond the footprint of the bank, we’ll look to add another four or five team members nationally.”

When asked about other initiatives on the horizon, Jaschik states, “Up to this point, BB&T hasn’t been a big tax player in the market and while we have an appetite to offer the tax lease product, we haven’t had the expertise on board to follow through with it. That’s one of the initiatives —  to bring people on board to have a true tax product available to our clients.” 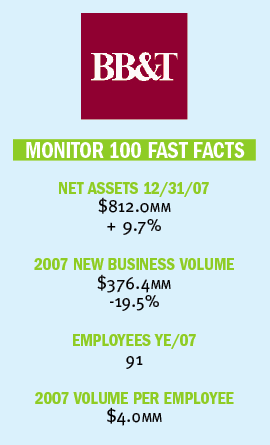 With just under six months on the job, Jaschik is in the process of diversifying the portfolio, which, at the end of 2007, showed concentrations in challenged sectors such as truck/trailer and construction equipment. “Obviously there are some concentrations that we’d like to diversify into more manufacturing assets. We’d also like to establish more of a rail presence than we have right now,” he explains. “We’ve taken some lumps just as other leasing companies have that are in the transportation sector. And as I mentioned, we’ll work to diversify ourselves, but we don’t have plans to get completely out of the transportation side.”

In terms of accomplishments, Jaschik has leveraged his previous experience on the syndication side of the business to launch syndication activity at his new home. “We’ve already brought people on board and plan to add more in an effort to allow ourselves to do some larger deals in the marketplace.” He continues, “We’ve been focusing on syndication, but we’ve also added an indirect activity working with banks and other leasing and finance companies to purchase some transactions for our account as well.”

But when all is said and done, Jaschik maintains a clear sense of his priorities, which happen to coincide with the opportunities that attracted him to BB&T in the first place. To sum it all up, he says, “I really think the big thing is to transfer the culture and processes from being a small-ticket shop to a mid-and large-ticket. With all that being said, we’ll need to operate two distinct platforms because the small-ticket market is a heck of a lot different from the other markets.”

As Jaschik’s business relates to the whole of BB&T, the equipment finance unit is a part of BB&T’s Specialized Lending Group, which includes other commercial finance products like asset-based lending. The larger group is led by Clarke Starnes who, in March of this year, was named BB&T’s chief credit officer.

BB&T traces its founding to the years following the Civil War when the son of a wealthy planter established a banking institution in North Carolina. Today, the bank maintains operations in 11 states and in Washington, D.C.

Beyond his work at BB&T, Jaschik takes an active role in moving the industry forward. As for what keeps him excited about the equipment leasing and financing industry, Jaschik says it’s really about the challenges. “It’s always a challenge and you live for the next deal or developing the expertise to pursue new markets. And it’s an ever changing marketplace and that’s what I really enjoy.”

Currently, he serves on the board of the Equipment Leasing and Finance Association (ELFA). “It’s really worth it,” he says definitively, “I’ve been active for the last 15 years by chairing the middle-market bank steering committee as well as the membership committee. I’ve also spoken at a number of ELFA events and served as chairman of the Association for Government Leasing and Finance. It’s all been beneficial to my career.”