Two years after his company was picked up by Capital One as part of its North Fork acquisition, All Point Capital’s president, Walter Rabin, discusses how things have changed. 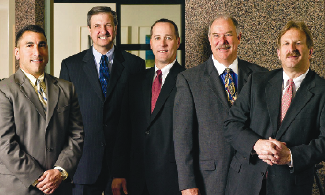 Back on March 10, 2008, Capital One Financial Corporation issued a statement announcing that it had successfully completed the integration and rebranding of North Fork Bank to Capital One Bank.

The announcement brought to a close two years of work that began in March 2006 when Capital One first revealed that it was acquiring the New York bank in a deal valued at nearly $15 billion. For Capital One, the decision was part of a larger strategy to leverage its position as a consumer lending powerhouse into a new status of one of America’s leading retail banks.

“Everything that made North Fork Bank a great bank and a great business partner for our clients will remain the same, but leveraging Capital One’s national platform enables us to enhance and expand our product offerings and make changes for the better,” said Lynn Pike, president of Capital One Banking.

As an added bonus, Capital One picked up a premier commercial finance business in the form of All Points Capital. When last we spoke to Walter Rabin, president of All Points Capital, we were knee deep in the 2005 Monitor 100 and Rabin was celebrating a 50% increase in new business volume over the previous year.

“There’s always opportunity when you look at the changing environment,” Rabin told us back then. “There’s room for entrepreneurialism in finance and banking if you’re willing to take a little leap.”

He wasn’t simply pontificating. In the three years since making that statement, Rabin’s company, which now goes under the dual name Capital One Equipment Leasing & Finance/All Points Capital, has jumped nine places on the Monitor 100 ranking (from #38 to #29), and is currently enjoying its status as a unit of the nation’s second-most recognizable consumer finance brand (behind American Express). The potential is not lost on Rabin.

“What we want to do is to utilize that brand recognition in all of our banking businesses, including equipment finance, and leverage that brand name but move it to a more sophisticated plane by introducing the Capital One Bank concept and not just the credit card,”  Rabin explains.

“The enterprise-wide move here is to become more of a traditional bank and leverage both the strength of the credit card, which is a very high-yielding asset, along with a great retail branch system, and then lay on top of that strong commercial lending groups that give diversity to the assets, such as our group.”

A year before Capital One acquired North Fork, the company made its foray into the retail banking industry when it bought Louisiana-based Hibernia Corporation.

Rabin explains that over the past year and a half, the emphasis has been on the integration of the legacy Hibernia equipment leasing group — which changed its name to Capital One Leasing — into the COEL&F/All Points family. Beyond that, the company has been working to assimilate North Fork’s taxi medallion finance business — which was previously a banking product — into the commercial finance suite. “They felt that we were better equipped in niches that aren’t traditional,” Rabin says of the decision to transition the unit.

Today, Capital One Taxi Medallion Finance is one of the largest financiers of taxi medallions, with more than $540 million in medallion loans in New York City alone. The company also has a leading position in medallion finance in Chicago, and is active in Newark, NJ, Miami and other markets. 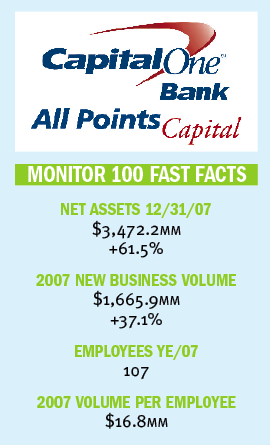 Equally vital to the company’s recent growth has been COEL&F/All Points’ Tax-Exempt/Municipal Funding business. Founded in 2004 as part of All Points Capital, the division originates and facilitates transactions ranging from $250,000 to $20 million — both directly and indirectly — for entities including municipalities, schools, hospitals, and other agencies and special purpose vehicles. According to its website, since its inception the group has closed more than 150 transactions totaling $300 million of volume throughout the United States; and it’s growing.

“We’ve been very successful with that [product] in terms of our growth and in our spread across the country,” Rabin says. “California, in particular, is a large opportunity for that business and that’s our largest state for that portfolio. So that’s been a big growth area for us.”

The success of these initiatives, as well as the company’s Vehicle Finance Group and Equipment Finance Group, manifested itself in a 61.5% increase in managed assets in 2007. New business volume for the year jumped 37%, to $1.7 billion — nearly half of it from direct origination. Since its inception in December of 1999, All Points Capital has financed in excess of $4.5 billion worth of equipment and has a current managed lease/loan portfolio of well over $3 billion.

Yet Rabin is quick to point out that in spite of all the change and growth since 2006, independent lessors can still count on the same dedicated level of service they had come to rely on from All Points Capital. This philosophy is best reflected in the company’s decision to use both the Capital One and All Points Capital name.

“We’ve made a strategic decision to utilize the All Points Capital name for all of our indirect businesses where we acquire assets from and service independent equipment leasing companies, and for the rest of our businesses — for all of our direct go-to-market business —  we’re using Capital One Equipment Leasing & Finance,” explains Rabin. “[By doing this] we’re able to leverage the brand for our direct business while maintaining our focus on the independent lessor and not dominating, perhaps, the lessees’ perspective by introducing a bigger bank entity into the mix.”

Like everyone in the finance industry this year, Rabin says the state of the economy has been an area of concern, particularly for companies involved heavily in the consumer sector like Capital One. He adds that the company’s decision to diversify into commercial lending has provided a vital safety net.

“The business is margined properly to withstand significant losses, or write-downs, even in a bad economy,” he says. “I’m confident that the bank will see its way clear through the recession and be prepared when we come out of it to be in a better place competitively than we are right now.”

Rabin says he believes that as the economy recovers, COEL&F/All Points Capital will be positioned to take advantage of opportunities beyond what he calls the “risk adverse lines” the company has found most fruitful during the current downturn.

“We would hope that when we come out of this and the economy picks up again there may be some opportunities for us to look at more revenue opportunities in higher-yielding products with acceptable risk levels in areas such as vendor finance or even perhaps a smaller-ticket finance programs, which we currently don’t entertain,” he says.

“Clearly now is a buying opportunity if you wanted to just load up on portfolios, but we’re not looking to do that—we’re still a company that’s going to grow organically for the most part.”