Digital Transformation: Is the Equipment Finance Industry Falling Behind?

by John Rizzi Monitor 100 2018
John Rizzi discusses the results of The Alta Group’s digital benchmark study, revealing the drivers behind and barriers to digitalization. Overall, the industry is lagging behind other financial service sectors in the adoption of digital capabilities.

Recently, The Alta Group and The Alta Group-EMEA (Invigors) completed a digital benchmark study aimed at understanding the current state of digitalization within the equipment leasing industry. We engaged a diverse set of lessors across industry sectors and geographies. The online survey and C-level interviews provided a rich data set that identified implementation drivers (see Figure 1), barriers (see Figure 2) and the areas across the leasing lifecycle which have received the most investment to date.

Digital strategies and the implementation of digital tool sets are widespread throughout the industry and a focus area for most lessors. However, the extent of digitalization of business processes and models varies, as do the planning and implementation methodologies employed. Factors including market segment, average transaction size and organizational resources play important roles.

Unsurprisingly, digital innovation is most common among lessors with flow volume or those aligned to specific industries such as agriculture and transportation where telematics and the Internet of Things (IoT) are driving transformative business models. Early adopters are motivated by the need to automate processes, utilize data analytics or develop new products, such as managed services programs, among other things. Conversely, legacy technology and/or cultural barriers in some organizations are hindering the adoption of digital tool sets. 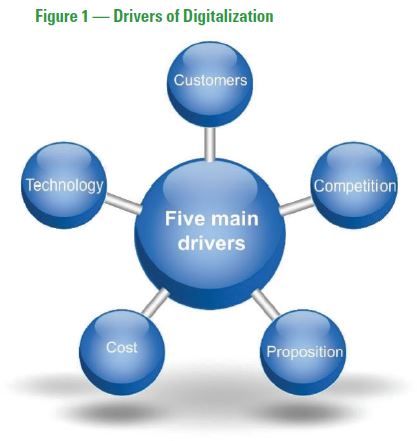 Where Do We Stand?

The equipment leasing industry has prided itself on innovative product development, product delivery and portfolio management.

The industry is mature, providing lease financing to every commercial equipment vertical with speed and efficiencies honed over more than 40 years. New business volumes are strong, margins are (mostly) good, loss provisions and bad debt are low and operating expenses are within historical norms. Things are good. Or are they?

The survey results dovetail with our direct experience. Lessors and lease management systems lag in the adoption of digital capabilities compared to other financial services sectors such as B2C and B2B loan and asset management providers. While the industry has widely discussed the need for transformative change, digitalization has been incremental for most and transformative for only a few.

Why is this? Many lessors pointed to the barriers to digitalization (Figure 2). Others recognized a first mover advantage but have not acted. Fintechs and alternative lenders offering a holistic digital platform experience are not (yet) capturing meaningful market share or creating enough concern for companies to make radical departures from their business models — for many, the fear of losing business has yet to materialize. 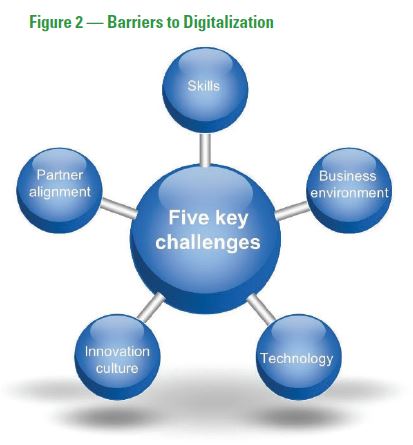 Some organizations have recognized the disruptive nature of digitalization and have completed or initiated the process of transforming their business models in substantive ways, but they are in the minority. Many executives who fully embrace the change to digital business models recognize measured success will lead to more widespread adoption. Most of the benefits of digitalization realized to date are focused on achieving greater process efficiencies and enhanced customer experience. Fewer than 25% of lessors surveyed have realized financial benefits in terms of greater revenues, lower costs and improved margins. The verdict was it was too soon to tell how digitalization will affect the bottom line.

Blockchain, IoT, big data, AI, smart contracts and predictive analytics will facilitate future business models as applications incorporating these technologies are developed for, or adopted by, lessors. Over the short term, technologies developed outside the industry, such as AI and predictive analytics, seem most likely to have meaningful application to the industry.

Where We Are Headed

While the industry may be behind in creating transformative digital business models, it is at a transition point. Though uncertainty and indecision were reflected in survey responses and expressed by many at industry conferences, new and innovative tools are being introduced to help drive substantive change.

Companies succeeding in digitalization efforts focus on incremental changes based on observation and collaboration at various levels in the organization — counter to the traditional executive-driven model. The top-down model is less effective in digitalization efforts because the second level charged with execution may not have been included in the decision-making process in a way that helps them understand the technology and alleviates concerns over potential loss of domain control.

Looking at the supporting infrastructure, taking a traditional “big bang” transformational project approach to digitalization can be fraught with risk. A better approach is extracting ideas from line staff, promoting from the bottom up to gain executive support and ensuring alignment to company strategy. This sets the stage for a transformative environment in which change is understood and agreed on by all major stakeholders. It results in a better understanding of the needs and requirements of technology solutions and how they fit into the cultural blueprint and system roadmap. A transformative environment also allows for quicker proof of concept projects, which may or may not prove viable, but can lead to greater collaboration and better outcomes. Understanding how to develop this kind of environment requires a fundamental shift in the ways organizations recruit, engage and evaluate the talent and experience of staff and business partners.

Embracing the promise of digital technologies in alignment with a transformative strategic vision will drive the next level of innovation in equipment leasing. It is an exciting time.

3 Replies to “Digital Transformation: Is the Equipment Finance Industry Falling Behind?”

Very insightful John. The Alta Group is very much a thought leader in this industry!

Somewhat insightful. Keep in mind, you don’t need to completely uproot your entire process in order to increase efficiency for a certain spoke of your business wheel. You can implement automation for say, Underwriting- Bank statement review via DecisionLogic, and so on and so forth. 1.) Once your organization has adopted these new processes
2.) Cost savings and/or improved margins are realized
3.) The customer (broker or end user) reacts positively
Then you can assess how to move forward.
START.STOP.CHANGE.REPEAT.

I totally agree with what you said. This article is very informative and helpful. I also think that embracing the promise of digital technologies in alignment with a transformative strategic vision will drive the next level of innovation in equipment leasing.