First American Equipment Finance founder and CEO Bill Verhelle gave up a promising career in law to follow a passion for entrepreneurship. Nearly 15 years later, his company, First American Equipment Finance, is successfully riding out the recession and continuing to realize double-digit growth while taking the time to give back to the community. At the same time, Verhelle and his company seek to “do right” for their customers and work toward the greater good. 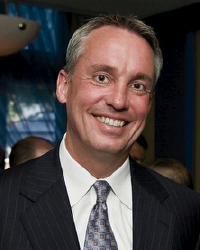 With every leasing executive I profile, the more I become convinced there is not one path into this industry, but many. Every story is different; and yet at the end of each varied route we find a common thread that seems to draw this diverse group of people to the industry they serve: namely, a love of working with people and helping their businesses succeed.

Bill Verhelle, the co-founder and chief executive officer of First American Equipment Finance (FAEF), is no exception. If a long and storied career in the leasing industry wasn’t the first thing on his mind while pursuing his M.B.A. at University of California Los Angeles (UCLA), it was even less so four years after graduating, when at the age of 30 he decided to pursue a career in law.

Verhelle had gotten a taste of the leasing industry during his time at UCLA, having spent five years at Tokai Financial Services (now part of De Lage Landen Financial Services), where he served as a vice president and Western Division manager.

But in 1996, following a youthful dream, he left Tokai to enter Cornell Law School — consistently ranked as one of the best law schools in the country. To an observer, it would appear that Verhelle was on the path to a promising career as an attorney. But fate would intervene and jettison the young law student on a completely different course. The same year he entered Cornell, Verhelle and a colleague, Guy Klingler, started a small finance company in Ithaca, NY; and the rest, as they say, is history.

By the time he obtained his Juris Doctorate and was preparing to take the bar exam, Verhelle says the company —  First American Equipment Finance — already had six employees and maintained two offices, the headquarters in New York and a sales office in California.

At 45, Verhelle looks back on his short career in law with fondness; and though he remains a member of the New York Bar, he says he wouldn’t change for a moment the path he chose for himself. “I sometimes wonder how my life would be different had I pursued a legal career instead of starting First American, but I have no regrets,” he says. “Many traditional legal careers tend to be somewhat solitary. This is perfect for some people, but it wouldn’t have been the best fit for me. I’ve always enjoyed building a business, which I have learned is all about working with people.”

Thirteen years on, First American Equipment Finance is today a robust company, with a staff of more than 80 employees and offices in southeastern Rochester, NY, Chicago and Los Angeles. The firm specializes in leasing high-technology equipment from a variety of different vendors to large corporate borrowers. FAEF ranked on the Inc. 500 for 2000 and 2001, and for the past three years has made the magazine’s list of the 5000 fastest growing companies in the U.S.

Last year, in the midst of a recession that brutalized the finance sector, the company realized a 20% increase in net assets, putting more than $150 million in new business on the books. Marking its fourth year on the list, the company jumped 12 spots on this year’s Monitor 100 (from #88 to #76) and ranked #8 by volume in the Monitor’s 2009 Top Private Independents.

A large part of the company’s success can be attributed to the rather unconventional way FAEF does business. Verhelle approached the building of his company much the way an architect puts together a structure. Every aspect, from hiring to originations to administration is carefully considered for the merits it brings to FAEF and its clients.

Central to this model is a three-pronged strategy that embodies FAEF’s operating philosophy. At the foundation is a centralized distribution system that uses Web-based videoconferencing technology and proprietary CRM software to serve customers in all 50 states.

Capping out the structure is what the company calls its “job shop” operations model, whereby each new customer is given a single, high-level point of administrative contact. “This contact is the only other person the client will need to interact with beyond the salesperson,” Verhelle says. “By contrast, most competing firms employ an assembly-line model, in which a transaction is processed through a series of different departments.”

Rather than attempting to emulate the industry’s success stories, Verhelle says he chose to create his own by highlighting and building upon the attributes that make FAEF unique. “As the marketplace was defined in the mid-1990s, First American had no competitive advantage whatsoever,” Verhelle says. “But our startup team shared a vision to create an entirely different kind of finance company, one that employed new distribution models and advanced technology to better serve its customers.

“So, we always recognized that we needed to do things differently. For example, we understood that there was no way we could succeed by employing GE’s or Bank of America’s strategies, which are based primarily on economies of scale and cost leadership. Those strategies simply won’t work for a medium-sized company in a mature, price-sensitive business.”

Instead, Verhelle explains, FAEF decided to focus on adding value in ways that are not necessarily feasible at larger companies. Among them is the policy of dedicated customer service reflected in the “job shop” model, which Verhelle says keeps clients coming back.

To illustrate the attractiveness of this approach to FAEF customers, he recalls a conversation he had with a client, a CFO at a large multi-national corporation. “While he liked his sales representative at the equipment finance division of the large bank that served his firm prior to us, every time he completed another transaction with the bank he was forced to work with a new group of operations people who knew nothing about his company, or his needs and preferences; he never worked with the same operations person twice,” Verhelle says.

Verhelle adds that with more than half of FAEF’s new originations coming from repeat business with existing customers, it’s not hard to see the approach is working.

Over the past two years, the commercial finance industry —  and especially independent lenders — has seen funding dry up as the credit markets retreated. The liquidity drought has forced many companies to pull back on lending, and in some cases, to close up shop altogether.

While FAEF is certainly not immune from problems in the wider economy, Verhelle says the company has managed to avoid any serious disruptions in lending capacity, due largely to the strength of its relationship with its financial partners, which include both national and region banks.

Throughout his career in leasing, Verhelle has remained an active member of the Equipment Leasing and Finance Association (ELFA), and in 2006, he served on the task force that vetted and hired former Congressman Ken Bentsen to take over the helm of the organization following the retirement of long-time president Michael Fleming.

From 2007-2008, Verhelle served as chairman of the association, a role he calls the “highlight of my career.” During that time he traveled to Madrid, Sydney and Moscow as a representative of the U.S. equipment finance industry. “One of the things I learned is that there is a great deal of respect from many of the executives in these other countries for what’s being done in commercial finance in the U.S.,” he notes. “It was a pretty difficult time, with the credit crisis blowing up — and even during those times people were very interested in the way things are done in the U.S., and they were interested in the ELFA.”

Verhelle takes his dedication to service one step further. FAEF is heavily involved in charitable programs, including Big Brothers and Big Sisters of America, the American Heart Association and Dimitri House, a homeless shelter in the Rochester area.

“You know you have to feel good about what you do every day and that goes for everyone in an organization and I think we work pretty hard to make sure on the business side of it we really do right by our customers … but I also think it’s important to be able to have an impact on the communities that you live in, and we’ve always tried to build things like that into our company,” he says.

Today Verhelle continues to reside in upstate New York, with his wife and their four sons. In spite of the hard work and dedication he has put into building First American Equipment Finance, when asked to what he attributes the company’s success, without hesitation he points to the team he has working for him.

“There are few shortcuts to success in business. You reap what you sow. Our long-term success over the past decade, and our recent success during these past two difficult years, is based almost entirely on a team of competent and professional people doing the right things every day. The level of commitment we have from our people is the best I’ve ever seen in any organization with which I’ve been associated and I’m honored to work alongside them.”

Christopher Moraff is an associate editor of the Monitor.

Growing the Power of the Invoice with Digital Transformation

The equipment finance industry “owns the invoice,” putting lessors at the nexus for helping customers connect among a growing list of sectors. Scott Nelson details the steps necessary for defining the good, the bad and the ugly for invoice methods and techniques.