Starting his career in the community bank arena before moving to two of the bigger companies in the country, Tim Bruckner realized his roots were in the “relationship” banking world, and that’s what led him to his current position as president of M&I Equipment Finance in August 2007.

From the beginning, Bruckner knew he would be in the finance business — earning a finance/banking degree from the University of Nebraska. In 1989, he entered the community banking world, but soon became disillusioned after watching many get lost in the shuffle due to consolidation and acquisition. It was then he decided to go back to school to earn his Master’s degree from Creighton University in 1995.

Upon completion, he spent time at GE Capital in Omaha as a senior vice president and regional marketing manager, before heading to Crestmark Bank as its vice president and regional manager. It was at GE where he got a taste of the leasing world and he hasn’t looked back since. After Crestmark, he moved on to Banc of America Leasing & Capital Healthcare Finance where he was a national product head and national sales manager. In 2006, he joined M&I Equipment Finance as a direct sales manager before moving up to his current position last year.

Bruckner chose the move to M&I for a variety of reasons, namely that its Milwaukee office, where he would be headquartered, was closer to his Chicago home. In addition, he says, “I wanted the feel of a regional bank… What attracted me most to M&I was the commitment to the core values of treating our customers the way that we’d want to be treated. I feel very comfortable working in that kind of environment.”

Bruckner describes his transition to management of M&I as “significant because we changed a lot of the strategy and profile of our leasing company.” The equipment leasing group was established in 1956 as a proprietary leasing company called First National Leasing, founded by Patrick Henry Pringle. M&I Bank acquired the company in 1972. M&I Bank has been in existence since 1847, and is one of the largest banks in Wisconsin with more than 100 offices located across the nation.

According to Bruckner, when M&I purchased its leasing segment, that’s when the group developed a national reach with the availability of capital from the bank. Over the past seven years, he says, “we’ve transitioned our business from a more machine tool finance business — that transactional asset-specific business — to an integrated equipment finance solution provider.” The Equipment Finance Group currently boasts 19 employees in its salesforce with offices in nine states.

With M&I Bank’s already strong customer relationships, the equipment finance group has been able to expand on those partnerships. “We’ve got roots in Wisconsin that run 160 years deep in this market… When I look at that, I see that the value in what we bring to the table is really our brand and our ability to garner and maintain these long-term relationships, so we’ve really switched ourselves from a company that to a degree had a transactional focus to very much a relationship-focused lessor building off the strength and presence of the M&I brand in the markets that M&I serves.” The division added a full compliment of service products to match this client set.

This partnership between bank and subsidiary translates into a long-term relationship for the customer. “We find that by doing this, we are able to do more business with the same customers and let them experience that high-touch differentiated service relationship that hopefully will result in long-term customer loyalty.” 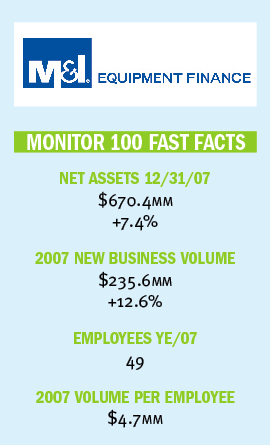 Ranked #64 in this year’s Monitor 100, M&I Equipment Finance posted a 5% increase in new business volume, and forecasts similar growth in 2008. Bruckner, however, says that it could be slightly lower because of some of the initiatives the group has planned this year. “Our growth will be impacted as far as our retained growth by how much we sell.” A significant change from the past — the division will now start selling a portion of what it originates through syndication in the secondary market when before it was 100% retained.

For this year and going forward M&I Equipment Finance is planning four key initiatives. One is the Business Ticket Leasing launch. “We’ve built it from the ground up, and we’ve integrated it fully with the [existing infrastructure] of our bank. We have a ready client set and we think a very flexible and seamless process to deliver the leasing product to the small-ticket customers.”

Another initiative is the launch of the group’s syndication platform. With it, M&I Equipment finance will have the ability “through syndication to do some larger transactions and some complex structures where it may be better to syndicate parts of them than to hold the whole transaction. It allows us to maintain constant liquidity,” he explains.

The other two plans are more work-flow oriented. The group introduced a concept where the same people are working with the same clients from beginning to end. He notes that with this new process, the division is finding it “builds an initial confidence between the clients and us and it is allowing us to reduce our cycle times from the time we propose to the time we close.”

The last objective is to integrate the group’s credit processes more deeply with the bank’s processes on larger transactions, allowing the group to respond more quickly to its customers. “What we don’t want to have happen is a long-time client of M&I feels like it has to get to know us again just because they’re now doing business with a leasing company. We’ve found that this has also had a very positive impact with our long-term customers.”

Although he notes a lot of these initiatives are mostly blocking and tackling for the company, it’s really all about creating a customer experience that’s noticeably different from what they were getting before. “We want them to feel as if we are a partner. And in doing that, we’re spending more money this year than we’ve ever spent in the history of the company on internal education, both from a tax standpoint all the way through to industry expertise and credit training… I want customers to feel that the individual they’re working with is actively involved in the decisions that affect their company.”

As for the current opportunities for the industry at large, Bruckner notes that many “lie in being a predictable source and partner for our clients to acquire, manage and dispose of their equipment.” And, he feels leveraging its new full-service solution for its customers is what will be the deciding factor for many potential new customers.

“I think that any equipment finance business that views itself, right now in particular, as being solely a tax-motivated substitute for intermediate term secured debt is suffering from a terminal disease… The industry has gotten too smart, our competition has gotten too good.”

He adds that those companies that understand that and take more of a solutions approach will survive and thrive no matter what the market is doing.

And these new procedures, initiatives and opportunities keep Bruckner excited about his job and the industry. “I like the fact that it has been in a state of change ever since I got into it… The industry, as a whole, has been very nimble and responsive to that change. It’s an industry that rewards the individuals in it for being creative and for being innovative. And we’re finding all the time, as an industry — and we’re not the only ones doing it — new and creative ways to add value for clients… that competitive pushing that occurs in this industry more than others also keeps me excited about it.”

Understanding the Value of Having Boots on the Ground: Conducting Asset & Liability Investigations on Defaulted & Past Due Customers

Equipment financing and leasing companies could be finding several more productive ways to gain insight about their defaulted customers.