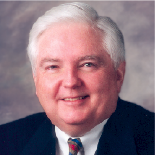 Each year the Monitor 100 gives us the opportunity to get acquainted with companies that are joining our ranking for the first time. In many cases, these companies are well-established market players that have been thriving for years just below the surface. They have inspiring stories to tell, are almost always headed by dedicated entrepreneurs and help to remind us of both the variety and vitality of the leasing industry.

Making the cut this year is California-based Pentech Financial Services. Pentech is an independent general lessor focused heavily on servicing the broker community. Coming in at #91 on the 2007 Monitor 100, the company rushed nine places in on its first-time placing, with $173.6 million in net assets.

And judging from the numbers, Pentech is right in the middle of a growth spurt. From 2005 to 2006, the company experienced a 77% increase in net assets with new business volume jumping nearly 50% to $123.2 million.

Founder and chief executive officer Ben Millerbis thinks this says something important about the company. “We’re certainly excited about the fact that we’ve entered the Monitor 100 this year,” he says. “I think what it demonstrates is that the leasing business continues to develop new models that work — ours being one that worked pretty well.”

While 2006 was characterized by considerable growth at Pentech, Millerbis calls 2007 the “year of efficiencies.”

“We are trying very hard to spend more money on things that will make us internally more efficient and therefore more efficient with our customers,” he says. “So for 2007, while we expect to continue our upward growth, it’s not the same priority that honing our system is.”

The story of Pentech Financial is inextricably linked to Millerbis. Now in its second incarnation, Millerbis founded the company in 1978 as “Pentek,” a general equipment lessor aimed at the small-ticket segment.

Before long it was growing, providing leasing and other financial products to emerging growth technology companies in Silicon Valley and the Pacific Northwest. The timing couldn’t have been better. In 1980, when Apple Computers went public, nearly 100 high-tech companies were beginning to make their home in Silicon Valley.

In 1982, Pentek was acquired by Alaska Pacific Bancorporation (APB). Millerbis stuck around and managed the company until late 1985 when Alaska Pacific was sold to Key Bancorp, Inc. In that time he helped expand the portfolio to nearly $100 million.

Following the sale to Key, Millerbis and the core of Pentek’s management team elected to leave. They changed some letters around, and later that year Pentech Financial Services was born. The company’s goal was to focus exclusively on the equipment financing needs of the emerging growth marketplace.

“Our business model is a little different in that we view our customer as the broker/partners that we have — the 180 that we have in the field — and Manifest Funding, with whom we maintain a strategic partnership,” says Millerbis. “The products are varied to support their needs in the small ticket arena, primarily, and to a lesser degree in the larger middle-market commercial business — we try to develop products that will serve ever-changing needs.”

Pentech places a lot of emphasis on its relationship with Manifest Funding Services, a unit of US Bancorp. Millerbis says the relationship was born out of a need to provide financing options to an underserved segment of the marketplace.

“After 2001, a lot of small business owners were suffering the consequences of an industry-wide flight to quality that was going on, and the broker community was suffering as well. If they couldn’t find quality credits, they were not going to be able to complete the transaction with their lenders,” he explains. “The partnership with US Bank Manifest came out of that, as they recognized that their partners — broker lessors — needed this product but as a bank they weren’t able to offer it to them.” 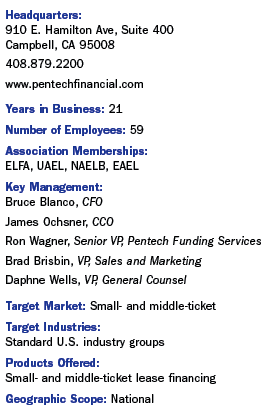 The relationship has been mutually beneficial. As a premiere bank-affiliated funding source, through its partnership with Pentech, Manifest is able to provide a B-C funding alternative for its customers.

“What we have done is kind of expand the credit window that US Bank had while, at the same time, keeping as many of the programs they offered their customers intact or modified to meet the risk that we took in the credit,” says Millerbis. “The timing was good; we had the right people and we had the right partner to make that work. It was certainly a total reinvention of our company at that time.”

Launched in January 2004, the partnership offers products under the “Navigator” and “Navigator Plus” programs. Navigator is a small-ticket leasing program managed by Pentech Funding Services in San Diego, while Navigator Plus concentrates on middle-market leasing and is serviced by Pentech employees in Marshall, MN, and at Pentech’s corporate offices in Campbell, CA.

As much an entrepreneur as a leasing executive, Millerbis has spent his career building companies. After Pentek was acquired by APB and while still serving in a management role, Millerbis helped found Silicon Valley Bancshares. Drawing on the potential he’d seen earlier while lending to a blossoming technology sector, Millerbis helped establish the company as one of the most successful high-technology lenders in the country. Millerbis served on its board, and chaired the Directors’ Loan Committee for 12 years, from 1983 to 1995.

A father of two and grandfather of six, Millerbis makes his home in Los Gatos, CA, ten miles south of San Jose and just east of the pristine 3,600 acre Castle Rock State Park, located along the crest of the Santa Cruz Mountains. He is an active participant in the leasing industry and is a member of the board of directors of the Equipment Leasing and Finance Association (ELFA). He also previously served as both president and director of the United Association of Equipment Leasing (UAEL).

After nearly three decades fostering the Pentech name, Millerbis says today he gets the most enjoyment out of sharing what he has learned with newcomers to the industry.

“As long as it remains fun — and it has been for the past 30 years, that will continue to drive me to find new ways to do things. One of the pleasures I get is from dealing with a group of broker/lessors who are growing their business and seeing the fun that they’re having. I watch and see myself 30 years ago and I think these are the bright young people that are going to lead our industry for a long time.”