by James (Jim) Jackson Mar/Apr 2022
M&A activity was robust in 2021. James Jackson discusses notable recent transactions, the status of the current market and potential economic risks. He also provides an M&A outlook for the year to come.

Not all that long ago, the COVID-19 pandemic spread throughout the world, creating hardships for many businesses and virtually eliminating merger and acquisition (M&A) activity in the equipment finance industry. While a few transactions were completed during 2020, many of those deals were either well underway when the pandemic hit or were supported by the fact that the buyer and seller had an existing long-term relationship. These relationships took the place of the traditional M&A process, as on-site due diligence activity was no longer viable given travel restrictions and work-from-home mandates.

Due in part to the strength of the economy prior to the pandemic and deliberate steps taken by the government and the Federal Reserve to stimulate economic growth, the economy was once again well-positioned to promote a robust M&A environment in 2021. Businesses experienced pent-up demand for equipment due to deferred purchases. In addition, the economy enjoyed low interest rates, record stock market levels, low unemployment, high levels of liquidity, access to credit and low corporate tax rates. These factors, combined with the directives of banks and private equity firms to put their excess capital to work, were largely responsible for ensuring that 2021 was a robust year for the M&A market.

With a few exceptions, most M&A transactions in 2021 occurred in the second half of the year. In February 2021, TCF Capital Solutions, a division of Detroit-based TCF National Bank, acquired BB&T Commercial Equipment Capital. BB&T had been part of Truist Bank’s small-ticket equipment leasing and finance business and the transaction consisted of approximately 60 employees and a portfolio of about $1 billion of small-ticket equipment leases and loans. At the time of the transaction, TCF was being acquired by Huntington Bancshares in an all-stock merger for $22 billion that was announced in December 2020.

In April 2021, North Star Leasing was acquired and became a division of Peoples Bank, a $5 billion dollar bank based in Marietta, OH. Later, in April 2021, HPS Investment Partners entered into an agreement to acquire Marlin Business Services in an all-cash transaction for $23.50 per share, which represented a 65% premium on Marlin’s closing stock price of $14.24 on April 16 of that year. The transaction was predicated upon the condition that Marlin would cease operations as a bank. This condition was subsequently achieved, and on Jan. 20, 2022, Marlin announced the completion of its acquisition by funds managed by affiliates of HPS Investment Partners.

On Sept. 24, 2020, Mitsubishi UFJ Lease and Finance Company signed an agreement to acquire its remaining stake in Hitachi Capital in an all-stock transaction consisting of 571.1 million of Mitsubishi UFJ Lease and Finance Company shares. Within the United States, the two companies continue to operate independently of one another as the management teams assess potential operating synergies. As of April 1, 2021, the two companies completed the merger to form Mitsubishi HC Capital. In June 2021, the combined entity entered into an agreement to acquire CAI International, a global transportation company focused on providing intermodal container sales and leasing. The company was acquired for $56 per share or approximately $1.1 billion in value.

In September 2021, Sasser Family Companies signed an agreement to acquire Falcon Lease Holdings, an international container lessor based in Singapore. Also in September 2021, North Mill Equipment Finance and Taycor Financial acquired 100% of the stock of the parent company of Aztec Financial, which was founded in 1997 and is focused on serving the carpet cleaning, flood and fire restoration, janitorial and sanitation, pressure washing, surface preparation and work vehicles industries. According to a press release, North Mill assumed the existing portfolio of leases and servicing capabilities, while Taycor assumed the vendor relationships and origination capabilities of Aztec.

In December 2021, First Financial Bancorp, a Cincinnati-based bank holding company with approximately $16 billion in assets, entered into an agreement to acquire Summit Funding Group, a Cincinnati-based equipment finance company. Summit, which has approximately 4,000 contracts totaling $500 million in portfolio value, will continue to operate as a subsidiary of First Financial Bank.

Also in December 2021, Ameris Bank, an Atlanta-based bank with $22 billion in assets, acquired Costa Mesa, CA-based Balboa Capital, an online provider of commercial financing solutions to small and medium-sized businesses. The bank hopes to leverage the online lending technology developed by Balboa to better serve its existing customer base and to help cross-sell financial solutions on a national footprint.

Late in December 2021, BMO Financial Group and its wholly-owned subsidiary, BMO Harris Bank, reached an agreement with BNP Paribas to acquire Bank of the West and its subsidiaries, including the Bank of the West equipment finance division for $16.3 billion in cash. The acquisition provides BMO with the ability to immediately scale and expand its national offering, particularly in California.

Charlotte, NC-based Commercial Credit also agreed to acquire Keystone Equipment Finance in December 2021. Keystone, which is headquartered in West Hartford, CT, specializes in providing commercial leases and loans to the transportation, construction and manufacturing industries. Keystone will operate as a wholly-owned subsidiary of Commercial Credit with no expected changes in personnel. 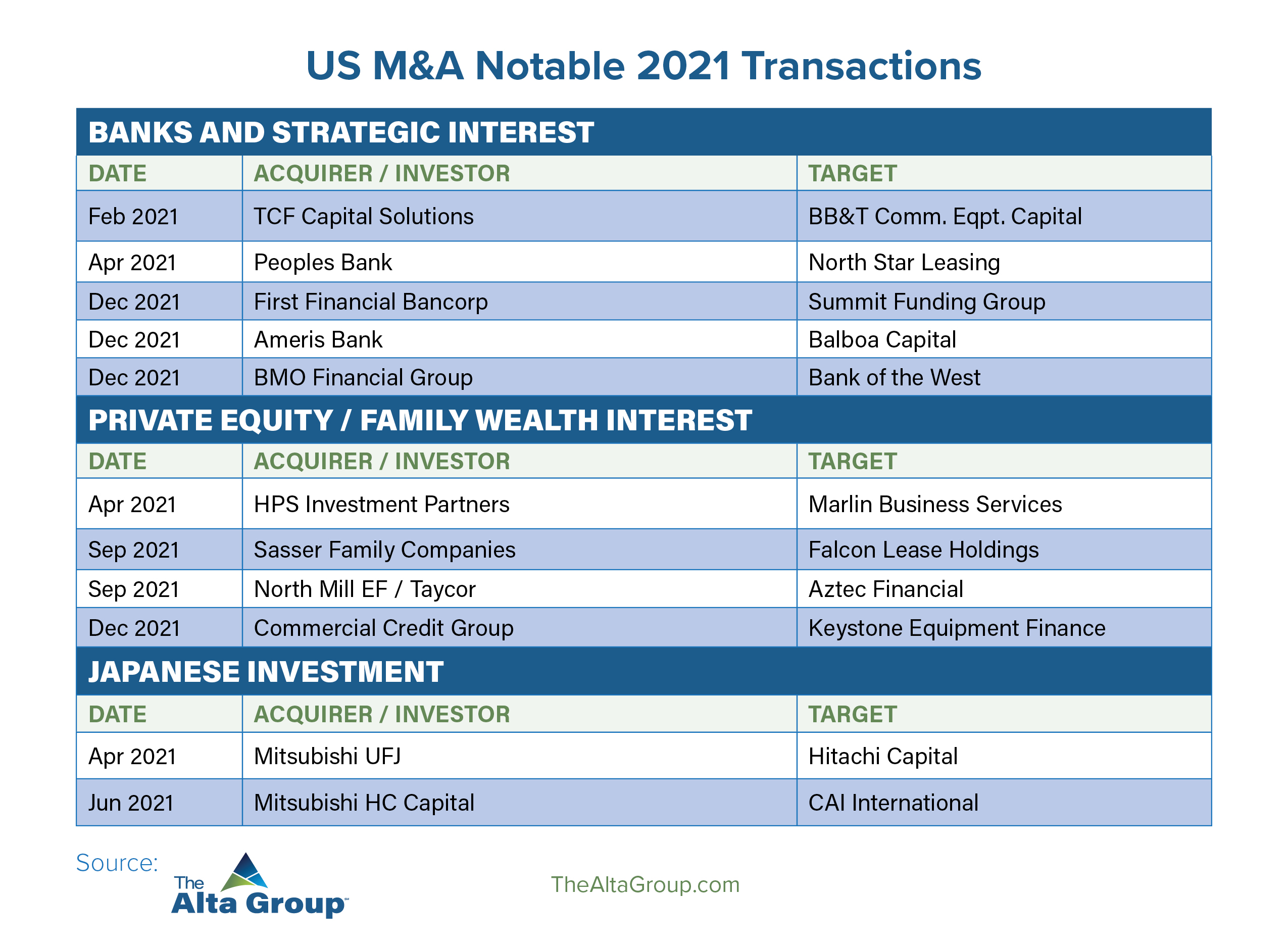 Many of the economic factors that made 2021 an active year for mergers and acquisitions remain present in 2022. M&A activity and company valuations are driven in large part by levels of liquidity and access to credit, portfolio quality, stock market trends, interest rates, unemployment rates, political uncertainty and business confidence levels. The favorable economic environment indicates we should continue to benefit from a robust M&A market at least through the end of 2022.

Government efforts to stimulate the economy have played a significant role in creating the current economic environment. The Federal Reserve lowered the Federal Funds rate by 100 basis points in March 2020 to target a range of 0% to 0.25% and set forth a large-scale bond buying program designed to provide high levels of liquidity and access to capital at a low cost. In addition, the government established multiple stimulus payment programs and generous unemployment benefit programs designed to ensure the economy would not collapse during the pandemic shutdowns. The easy access to capital, combined with low delinquency and low credit losses, created significant liquidity at banks and large institutions, which investors demanded be put to work to provide a reasonable risk-adjusted return. Competitive pressures drove already thin operating margins even thinner and created an environment in which banks and other large institutions wanted to grow their balance sheets and put more of this capital to work. I heard from several buy-side syndication parties there was very little opportunity to buy paper in 2021 from banks and other large institutions that sold paper in prior periods. This environment favors M&A activiy, as banks and other large institutions look to grow their balance sheets through acquisition.

While the economic impact of the first year of the pandemic is largely behind us, it provides an additional data point for potential buyers to measure the quality and experience of the senior management team of a potential seller. Potential buyers can obtain a better understanding of how the seller’s portfolio performed during the first year or two of the pandemic and how the senior management team managed the process throughout the payment deferral cycle.

On the sell side, many independent finance companies in the industry have aging owners who are beginning to focus on estate planning and transitioning their businesses to successor firms. Most of these owners understand they need to start the sale process early, regardless of their succession plan, as they will likely need to continue working, at least part-time, after the sale to successfully transition the business and achieve the optimal sale price for their company. Given the strong economic environment, many owners are open to discussions with potential acquisition partners, as it is uncertain when this favorable cycle will come to an end.

Several states have announced their intention to adopt some form of the rate disclosure rules for commercial transactions introduced by California and New York. Since banks are largely exempt from having to comply with these regulations, the cost of compliance and the disclosure burden and risks will fall largely on independent finance companies, providing an additional incentive to be acquired by a bank.

Supply chain issues continue to plague the industry and, in some equipment segments, are creating large backlogs that impact the level and timing of originations. If this issue is allowed to continue, originations and portfolio balances will decline and reduce the value of equipment finance companies. I have also heard from some in the industry that obtaining replacement parts for certain pieces of equipment is becoming more challenging. This can create problems at end-of-lease for finance companies that typically refurbish equipment for resale at lease maturity.

In 2022, one of the most pressing economic risks facing the equipment finance industry is the inflation rate, which stands at a 40-year record high. Consumers see the impact of inflation daily at the gas pump, grocery store and car dealerships and as the general cost of living outpaces wages. The Federal Reserve has already committed to combat this inflation through a series of interest rate increases commencing in March 2022 and a proposal to significantly reduce the bond purchase programs put in place to stimulate the economy after the early stages of the pandemic. While the Fed has not communicated how many interest rate increases will be necessary or the amount of the rate increases, most analysts believe the Fed will increase rates three or four times during 2022 for a total increase of 75 to 100 basis points in the Federal Funds Rate.

Interest rates play a pivotal role in company valuations and the level of M&A activity. When interest rates rise, potential acquirers must also increase their hurdle rates on acceptable investments, which generally results in lower acquisition values and fewer successful transactions. In addition, potential sellers who have not hedged their debt balances will realize further margin compression in their fixed rate portfolios and report lower earnings.

Based on the level of M&A activity at the end of 2021 and beginning of 2022, The Alta Group has reason to expect another strong year for M&A activity in 2022. Several attractive companies are either being offered for sale or are considering a sale, and we continue to hear qualified buyers have an interest in acquiring quality finance companies. Barring the larger impact of the potential risks outlined earlier in this article, I expect the M&A market to remain active during 2022 and for valuations of quality equipment finance companies to remain strong.

About the Author: James (Jim) Jackson is co-CEO of The Alta Group and leader of its merger and acquisition advisory practice. Jackson has more than 30 years of experience in the equipment leasing and finance industry and has served as a senior financial executive at MicroFinancial/ TimePayment, Deutsche Financial Services, AT&T Capital Corporation — Leasing Services and Signal Capital Corporation. He currently serves as board president of the National Equipment Finance Association.