by Ray James July/August 2017
Ray James from Ivory Consulting provides an overview of the various methods used to measure lease tax benefits, including the alternate limited benefit method, which has become popular as focus has shifted to both leverage and lease accounting considerations.

Have you ever employed the Multiple Investment Sinking Fund (MISF) yield in analyzing your lease transactions? Did you find it useful? Some people prefer using it because it is an established industry standard, while others believe it has pitfalls.

To begin a defensible analysis of MISF and its alternative, it is necessary to examine the major ways tax benefits are measured in the equipment finance industry. It is important to understand these differences for a number of reasons:

With that background, a short explanation of the two primary ways lessors have historically measured yields associated with equipment leasing is useful.

Some lenders view leasing simply as a product with flexibility and a preferred collection position over lending and do not bother to recognize the associated tax benefits. In many cases, this occurs with small-ticket leases where the rate of interest is very significant and the additional yield from tax benefits is therefore relatively small. Usually this situation is limited to small-ticket leasing or high-risk lending.

To illustrate, this lease is nothing more than a loan for yield measurement purposes, producing for a simple internal rate of return (IRR) as the effective rate:

Historically, lenders that want to measure tax benefits have used a widely accepted method, which, for lack of a better name, we refer to as the traditional method. This method essentially determines the amount of current tax due and the amount of deferred tax due at some point in the future, and applies this cash flow to reducing the investment balance in the asset. It is calculated on an after-tax basis so that both revenue and expenses are expressed after tax. Thus, with both current tax and deferred tax recognition, the basis in the asset is paid down faster near the beginning of the lease and then more slowly toward the end of the lease.

The traditional method assumes that a company always has an ongoing use for conventional tax benefits during the measurement period. Ultimately, this is a zero-sum tax flow benefit as the current and deferred tax balances reverse out to zero by the end of the lease. However, the front-loading of the benefits enhances the yield. The yield that is calculated is an after-tax yield and is traditionally converted into a pre-tax equivalent yield by dividing the after-tax yield by one minus the tax rate. This is commonly termed the “pre-tax equivalent MISF nominal yield.”
Consider the transaction depicted on the right:

In this straightforward example, the traditional method uses the pre-tax cash flows less the actual taxes paid to produce the after-tax nominal yield. This after-tax nominal yield is divided by one minus the tax rate (1.00-0.35), to produce the pre-tax nominal yield (4.63%), which is compared to the basic IRR to determine the value of the lease tax benefits. In this case, it was 0.63%. Of note, the taxes for 2017, 2018 and 2019 were negative in the chart to the right, which means that these were tax savings and paid down the investment. The tax benefit in the early years was offset by larger tax payments in the later years.

Over the last several years, an alternate tax benefit measurement, or yield, has become popular. This method, the limited benefit method, came into being as some companies began to focus on both leverage and lease accounting considerations. Perhaps the Basel II discussions on risk and leverage ratios have made leverage an increased focus for many lenders. Barron’s Accounting Handbook defines leverage (debt to equity ratio) as total liabilities divided by shareholders’ equity.1 Per SFAS 109 and the Vest Pocket CPA handbook, “the deferred tax liability, usually enjoyed by the lessor, is brought over from the liability side of the balance sheet to reduce the lessor’s investment only when a leveraged lease is involved.”2 Therefore, it can be argued that the only real benefit of the current and deferred tax liability is the associated reduction in borrowed debt and the associated interest expense. 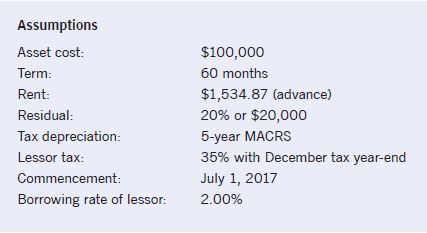 Consider the assumptions above, which now also include the lessor’s borrowing rate:

The limited benefit method uses the pre-tax cash flows plus interest saved from the reduced borrowing (calculated using the lessor’s borrowing rate), to produce the pre-tax nominal yield. In this example, the pre-tax nominal yield (4.27%) is compared to the basic IRR (4.00%) to determine the value of the deferred tax, producing a benefit of 0.27%. The deferred tax grows to a maximum around the mid-point of the lease and declines to zero with the last tax payment.

The equipment leasing industry has known for decades that, all other things being equal, tax benefits significantly enhance the lessor’s yield, making the lease product more profitable than a straight loan. Since most equipment lessors approach the tax and yield analyses the same way, differences in tax benefit calculations are usually due to differing tax rates and tax year-ends. For example, lessors have recognized that originating a lease near the end of a lessor’s tax year provides the largest deferred tax benefit. State and local taxes may produce a further deferred tax benefit. As a result, some lessors choose to syndicate transactions based upon the fiscal year end of the investor, and/or based on state and local tax situations. With the equipment leasing industry beginning to use two different methods to determine tax benefits — the traditional and limited benefit methods — the selection of a method will also be a determinant of profitability.

Summary from previous examples (shown to the right):

This article represents the thoughts and support of many lessors in the equipment finance industry who have spent time researching the issues discussed herein and developing the limited benefit approach with Ivory Consulting, the makers of SuperTRUMP. Ivory Consulting is sharing these thoughts so that lessors may review these concepts internally and with their advisors as appropriate. Ivory Consulting does not offer tax advice — please consult your tax advisor. Thank you to everyone who contributed to these analyses.