According to data from the American Bankruptcy Institute, 471 small businesses have elected to file for bankruptcy relief under new Subchapter V to Chapter 11 of the Bankruptcy Code since it was enacted. A new statistical table and analysis of this date is available on ABI’s SBRA Resources website.

The Small Business Reorganization Act of 2019 (SBRA) took effect on February 19, 2020, to provide a better path for small businesses to successfully restructure, reduce liquidations, save jobs and increase recoveries to creditors. It also recognizes the value provided by entrepreneurs.

In response to the economic distress caused by the COVID-19 coronavirus pandemic, the CARES Act on March 27 increased the eligibility limit for small businesses looking to file under Subchapter V from $2.73 million of debt to $7.5 million. The threshold will return to $2.73 million after one year. 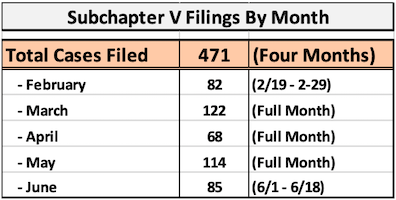 While no official (e.g., government) figures on Subchapter V cases have been released to date, the ABI’s Ed Flynn compiled the figures after a case-by-case review of records from the PACER system. A consultant and special editor to the ABI Journal, Flynn previously worked for more than 30 years at the Executive Office for U.S. Trustees and the Administrative Office of the U.S. Courts. In addition to providing the monthly totals of Subchapter V elections, he included an analysis of the filings on the SBRA Resources website that also broke down the Subchapter V elections by circuit.

“The data on Subchapter V elections and additional analysis from Ed Flynn will help provide a better picture to practitioners, researchers and the public about how struggling small businesses are utilizing the new law,” Amy Quackenboss, executive director of the ABI. “These statistics, and the wealth of information contained within ABI’s SBRA Resources site, make the site an invaluable reference.”

ABI launched the “SBRA Resources” website in February to help practitioners and struggling small businesses learn about the new law and stay updated on SBRA developments.

Can Independents and Banks Compete For Business with a Consumption Model?

The traditional equipment finance and leasing business model is changing. It has experienced increased pressure from customers to move to more of a utility/consumption, pay-for-use or anything-as-a-service model. These customer demands have had an impact on many market segments but... read more

The Millennial Generation Shift Will Create Opportunity for Equipment Finance

I was a mathematician before I became a physicist. My love of all things calculated is why Kenneth Gronbach’s message about the importance of population sizes and generational design immediately resonated with me when I first heard him speak in... read more