Aircraft leasing company Avolon reported results for Q3/20, including lease revenue of $504 million and total liquidity of more than $5.7 billion. The company further reported a net loss of $41 million and net debt to equity of 2.3x. In addition, the company said that lease revenue collection rate trended upward in Q3/20, with an aggregate increase in trade receivables and deferred revenue asset implying a year-to-date lease revenue collection rate of 83%. The company also reported that 24 customers started repayments as scheduled in Q3 while four additional customers remained in arrears or subject to an extension of their deferral period. 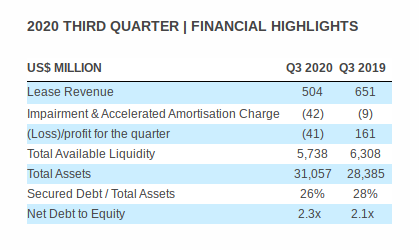 In terms of operational highlights, Avolon delivered four new aircraft and transitioned one aircraft to a follow-on lessee in Q3/20. In addition, the company sold one aircraft during the quarter, representing the final aircraft to be sold to the Sapphire 2020-1 vehicle. The company also executed a total of 55 lease transactions in the quarter, consisting of new aircraft placements, follow-on leases, lease extensions and 15 sale and leaseback transactions.

At the end of Q3/20, Avolon had an owned and managed fleet of 551 aircraft with total orders and commitments for 286 new technology aircraft. The average aircraft age was 5.3 years and the company reported a total of 145 airline customers in 61 countries.

“The third quarter represented another quarter of strong liquidity, active portfolio management and, encouragingly, a continued improvement in our revenue collection rate,” Dómhnal Slattery, CEO of Avolon, said. “Our capital position continues to be one of the strongest in the sector. Our capital strength and depth of industry relationships means we are well placed to take advantage of growth opportunities where they align with our prudent approach to risk management and strict underwriting discipline. We will continue to be nimble and opportunistic in coming quarters but will balance our appetite for opportunistic growth with maintaining a strong financial position, which is a hallmark of the Avolon franchise.”

A Tale of Two Vendor Channels

Can Independents and Banks Compete For Business with a Consumption Model?

The traditional equipment finance and leasing business model is changing. It has experienced increased pressure from customers to move to more of a utility/consumption, pay-for-use or anything-as-a-service model. These customer demands have had an impact on many market segments but... read more