A Conversation With David A. Merrill, SVP/Director of Commercial Leasing 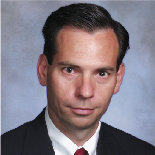 In spending time with Fifth Third Leasing’s David Merrill, one walks away with the clear sense that this industry leader is a “man with a plan.” Self-assured and methodical in his speaking, Merrill approaches each topic of discussion with an even-handed clarity. And a recurring theme emerges. He links three fundamental elements in articulating his vision for the future for Fifth Third Leasing — its team of professionals, its strategy and its operating plan. For Merrill, it’s all about one thing: execution.

So it’s no surprise that when this year’s Monitor 100 numbers came in, the Cincinnati-based leasing company reached a significant milestone in 2006 — breaking the $5 billion mark in net assets. When asked how this milestone was achieved, Merrill attributes the success to “the support that we get from our parent … its steady capital base and tax appetite make for a good environment for the leasing franchise.”

Merrill continues, “We’ve tried to maintain a sound business plan that evolves with the markets and leverages against the strength of the team and our culture. We’ve stayed steady to the four pillars of our parent: credit quality, fostering a strong sales culture, our relentless commitment to efficiency and execution, and the empowerment of our employees.”

In Merrill’s view, the success lies in the strength of his team, which he describes as a “deep bench with a lot of experience. Our ability to attract talent is predicated on our reputation in the market … that’s pretty hard to maintain over time, but we do it.”

Merrill explains how. Fifth Third strives to keep A-players in place and experiences very little turnover on the team. On the topic of employee empowerment, Merrill is quick to add that Fifth Third Leasing employees are entrusted with significantly more authority over their peers than in other institutions.

It all began in 1981, when Merrill joined Citicorp Industrial Credit selling vendor finance products. At Citicorp, Merrill received solid training and worked with effective managers. As a result, he became intrigued by the leasing industry, eventually moving from a sales position to sales management.

Committed to staying in the Midwest, Merrill moved over to the Chicago offices of Chase Manhattan Bank in 1987, again selling vendor programs. When Chase spun off most of its leasing operations in 1991, Merrill seized the opportunity to join Fifth Third Bank. He, his wife and two preschoolers made the move to Cincinnati. He viewed the then $8 billion parent as a terrific place to hang his hat. The bank was well capitalized, had a low cost of funds and an abundant tax appetite.

Over time, as the bank’s leasing franchise grew, Merrill was able to grow along with it. When he first arrived on the Fifth Third scene, the leasing unit held about $200 million in net assets and was generating an annual sales volume of $125 million. Even in 1991, the then 19-year-old leasing company appeared to be on the right track. Founded in 1972, the leasing unit began by holding equity investments in leveraged leases. In its infancy, Merrill notes, the unit did about $500,000 in leasing volume and served only depository customers.

Joining as a coach/player, Merrill began doing some originations and sales management, then moved to indirect originations and eventually led the indirect group. As is with all leasing companies, growth brings exposure, and Merrill was asked to launch Fifth Third’s syndication business, which he ran with the indirect group. In time, when the bank created the position of national sales manager, it looked to Merrill to fill those shoes. In his new role, Merrill hired team leaders to manage the direct sales staff, implemented a contact management system and brought forth a new go to market strategy.

With these structures in place, sales took off, marking a significant turning point in Merrill’s already successful career. In 2003, when David Jackson moved to another area within Fifth Third, the company once again looked to Merrill — this time to assume leadership of the entire leasing unit. And the rest, so to speak, is history. 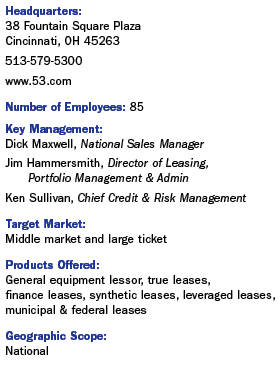 Although there have been changes — both internal to the leasing company and external to the industry — Merrill maintains the strength of the organization lies in the fact that the values and culture at Fifth Third have remained constant. As he explains it, “We provide our employees with a challenging and rewarding environment… But most importantly, we expect them to maintain their focus on the needs and wants of our customers.”

When asked about the balance of 2007 into the first half of 2008, he cites two initiatives. “We’re introducing new technology to keep our operation more efficient and, in turn, streamline delivery. This will give us the ability to execute more rapidly than our peers. In addition, we’re adding a small-ticket leasing program geared toward our business banking clients — this is a new market for us.”

As for the near-term strategy, Merrill says, “The other thing we’re doing is staying focused on the day-to-day blocking and tackling necessary in today’s environment. We’re concentrating on our customers’ satisfaction, credit quality and our origination efforts. And, we’re expanding in our affiliate bank markets — 18 in all — where we can most effectively leverage our product against our parent. There are some great cross-selling opportunities there.”

Addressing the long-term vision for Fifth Third Leasing, Merrill explains his team is developing a comprehensive planning process that effectively communicates this vision to everyone involved — from senior management to the most recent entry-level employee. The plan addresses emerging issues such as the implications of Basel II, converging accounting standards and evolving business models. Again, Merrill is quick to add, “That’s all well and good, but no matter what the strategy is, execution is where it’s at. You know, it’s like the old adage: ‘You don’t have to outrun the bear, you just have to outrun the other guy’ ”

When it comes to the leasing associations, Merrill can’t extol their virtues enough. Having served in numerous capacities at the Equipment Leasing & Finance Association, Merrill notes, “The association offers a great deal of value to our industry, and these are exciting times. The advocacy efforts are extremely strong and they come at a critical time. I, for one, intend to remain active… I get much more out of it than I’m able to contribute.”

So, with more than 25 years in the industry, one could wonder — what keeps Merrill going? “These days, the leasing industry is full of challenges … it’s not the ‘good old days.’ But there are opportunities and it’s rewarding to work through the challenges as they come to the surface. That’s one of the real drivers in keeping my excitement level high.

“Besides, I really like the people I’ve met, both at Fifth Third and in the industry — they are like a second family to me.” He sums up his excitement with a hint of levity in his voice, “It’s never dull … one day it’s a railcar, the next — a double-skinned oil barge.”