Financial Federal Demonstrates the Wisdom of Sticking to Its Knitting

While conventional thinking emphasizes the necessity of adaptation and change, once in a while a company comes along that seems to defy this commonly held belief. One such company is Financial Federal, which despite the meltdown in the financial services sector, illustrates the wisdom of maintaining a focus on what it does best.

As you get older you seem to develop a sensitivity to advice and wisdom that has been handed down by people who “have been there, done that.” So to the extent that we take the time to even think about what that means, we realize, like everything else in life, there had to be some learning to go along with the experience. How many times have you heard the expression, “They didn’t stick to their knitting, that’s why they got in trouble?” A case in point is Financial Federal (NYSE: FIF).

I’m sure even Paul Sinsheimer, the company’s president and CEO, wouldn’t mind me characterizing what Financial Federal does day in and day out as not very glamorous. However, we can only imagine how often Sinsheimer has probably been confronted with — and had to resist — the temptation to move beyond what Financial Federal does best. So many other finance companies have come and gone and I bet if we knew the truth, in some ways violating that golden rule is part of the story.

Examples that come to mind are Westinghouse Credit and Finova and, more recently CIT and GE Capital. What they all had in common was being unable to resist the temptation to venture beyond their grasp and reach for the golden ring.

Westinghouse Credit decided to grow its real estate finance business and ended up in a heap of ashes. Finova got caught up in the Fortune 500 thing and went well beyond its comfort zone only to end up in Chapter 11. CIT, once a storied commercial finance company, made the ill-advised decision to venture into consumer-related businesses, which in retrospect almost became its undoing. Trading at $4.54 a share at year-end, CIT’s share price is off almost 93% from a high of $61.36 per share reached at the beginning of 2007. It’s been downhill since then.

To put this in perspective one has only to look at Financial Federal’s share price at year-end; FIF was trading at $23.92, off only 13% from its 52-week high of $26.92. I say “only” in the context of an overall drop of 64% in the Dow Jones U.S. General Financial Services Index — the Dow Jones Total Market Index was off 40%. And when you think about what occurred over the course of 2008, it’s not surprising when you consider such marquee names like Citigroup and Bank of America saw their share prices drop precipitously as reports of continued loan-loss provisions and impairment charges spooked investors.

At the end of the year, both Wachovia and National City ceased to exist; but when considered in the financial services mix, share price declines of 86% and 90%, respectively should be factored in.

In a recent conference call with investors, Sinsheimer noted that Financial Federal’s first fiscal quarter’s performance was outstanding given the enormous problems in the capital markets as well as the overall economy. And compared to several of its peers in the equipment finance industry, “outstanding” is one way to characterize Financial Federal’s results given the current environment.

What’s makes the results that much more remarkable is the company’s primary business focus on two sectors of the economy that have suffered most from the downturn —  construction and road transportation. Over 80% of the company’s finance receivables are with customers in these industries. At the end of the first quarter of fiscal 2009, which ended October 31, 2008, the company reported finance receivables outstanding of $1.89 billion.

The “no reserve build” rationale seems to be tied to the fact that delinquency and nonperforming loans as a percentage of total finance receivables didn’t change appreciably over the time periods covered. It’s only when you go back to the 2007 fiscal report that you notice a trend change in coverage (i.e., delinquencies, nonperforming loans and net charge-offs were approximately half of what they were in fiscal 2008). Net charge-offs for the fiscal years ended July 31, 2006 and 2007 were less than 0.01% of outstandings with no provision charge in either year.

So the real question, at least in our mind, is what can be learned from this experience?

A reading of Financial Federal’s annual reports makes it clear that its consistent success has occurred during various economic cycles including volatile interest-rate environments, recessions and market disruptions. In his most recent letter to shareholders, Sinsheimer said: “Fiscal 2008 was the company’s 19th consecutive profitable year marked by record net income … asset quality continues to exceed our already high expectations.” In a not so subtle message to other lenders, he noted the portfolio problems experienced by the financial services industry were caused by “unsound lending practices.” He explained, for example, “Using various algorithms to determine credit approval appears to work in only good times and when the unexpected doesn’t occur.”

The company has maintained a low leverage ratio: at the end of the most recent fiscal quarter, its ratio of debt to equity was 3.3 to 1, which compares to CIT’s ratio of 11.5 to 1. Regarding the correlation between leverage and stock price, analyst Paul Miller of Freidman, Billings, Ramsey said in a recent note to investors that, “The greater the leverage to common equity, which ultimately determines stock price, the riskier the institution.”

There are a few other things worth noting: Financial Federal does not purchase receivables from brokers; it does not use credit scoring, every deal regardless of size must be approved by at least two credit officers; its marketing people are compensated by salary, not commissions; and Financial Federal considers asset quality the most important aspect of its business.

Financial Federal’s formula for success is achieved by concentrating on financing equipment with a longer life than the term financed, which has historically low levels of technological obsolescence and is used in more than one type of business, provides easy access and transporting, and has broad, established resale markets. Lastly, the company does not finance equipment located outside the U.S.

Add the foregoing to the credentials that chief executive officer Sinsheimer brings to the business every day, which encompasses more than 38 years with just two companies —  Commercial Alliance Corporation and Financial Federal. And from what I know from personal experience — having had the opportunity to work for Commercial Alliance back in the late 1970s — nothing much has changed (I say that in a positive way). 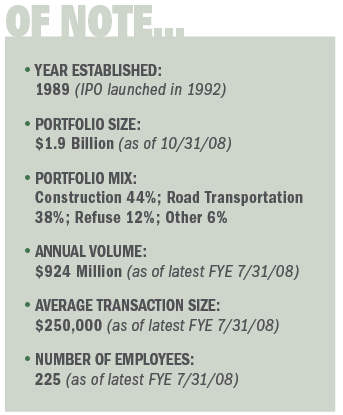 This is where I learned that “a loan well made is a loan half paid.” Scrupulous attention is paid to deal structuring and documentation. There is a legal team that makes sure everything that needs to be present in a customer’s file is, in fact, there. Sinsheimer noted in a recent call with analysts that as a policy, since the company started, having an in-house legal team helps to control outcomes and costs, especially in these types of environments.

Because of the many customer relationships that have been forged over so many years, Financial Federal is in the enviable position of having a family of friends to help with a problem account or a repossession. And although I was never close enough to actively participate in a problem situation, Commercial Alliance always seemed to have the unique ability to handle delinquencies and nonperforming loans in a way that afforded the opportunity to improve its risk position and pricing by modifying the deal to the company’s advantage. Based on Financial Federal’s most recent financial reports, I have every reason to believe that this same philosophy is as true today as it was 30 years ago.

During his most recent conference call with analysts, Sinsheimer noted: “If the economy slows further, our balance sheet should continue to shrink and asset quality should become weaker.” But in an upbeat comment he added, “We’ve already seen bank competitors exit our marketplace. GE Capital, a significant competitor, also sharply curtailed its lending activity in the industries we serve. Less competition usually improves pricing, and we may also have opportunities to acquire portfolios at  a discount.”

So what you have here is essentially an anomaly — a deviation from the common rule that says “change or die.” The irony in that phrase is many financial institutions did venture into lines of business that in retrospect were not fully understood and ultimately led to their demise. Financial Federal, on the other hand, has consistently demonstrated the wisdom in continuing to pursue a focused strategy. As evidenced by the performance of the company’s share price, investors seem to value this approach, despite continuing signs of economic uncertainty.

Another lesson here is the importance of succession planning. As noted earlier, Sinsheimer began his career at Commercial Alliance in 1970. And as many of you old-timers probably know, it was run very successfully by two entrepreneurs — Bernard and Cal Palitz — who understood the importance of sustaining continuity of business philosophy and purpose. Selecting Sinsheimer — who shared the same vision — as CEO speaks volumes about their grasp of how to best leave a living legacy to their stakeholders.

Gerald F. Parrotto is the owner, publisher and executive editor of Xander Media Group, Inc., which publishes the Monitor and ABF Journal.