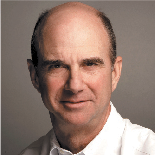 To refashion a familiar phrase — what a difference a decade makes. When Tom Martin and Beau Clarke purchased ICON Capital in 1996, the then 11-year-old company only vaguely resembled the ICON Capital of today.

Headquartered in New York with offices in San Francisco, Boston, Toronto, Vancouver and London, this independent lessor provides a wide array of financing options ranging from traditional leasing products to highly structured solutions. As Martin, ICON’s president and CEO puts it, virtually “anything is possible” with the right asset, the right lessee and the right situation. And it’s this approach that has garnered the company a great deal of positive attention, both nationally and internationally.

Martin and his business partner, Beaufort (Beau) Clarke, purchased ICON Capital in August 1996. At that time, ICON had seven publicly registered equipment leasing programs, which had raised somewhere in the neighborhood of $200 million and focused on small and middle-market transactions. The partners, which later included Paul Weiss, made a conscious decision to shift this focus to take advantage of middle-market and large-ticket opportunities. Apparently, the strategy played out well.

According to the 2006 Monitor 100, ICON Capital ranked as the fifth largest independent leasing company based on its net assets and the largest privately held company in its segment. Since 1996, it has sponsored six additional publicly registered programs, which have raised well over $750 million. As for the 2007 Monitor 100 ranking? This year, ICON is ranked #48 — a slight increase from it’s 2006 ranking of #49 — and it still holds its position from last year as determined by net assets.

At the helm we find a Concord, MA, resident, who spends four days in the New York office and one in the Boston office. After earning his degree from the University of New Hampshire, Martin began his leasing career with Chancellor Corp. in Boston. Following a seven-year stint with Chancellor, he and Clarke formed Gemini Financial Holdings in 1992. The two, along with Weiss, then went on to form Griffin Equity Partners in 1993 and eventually purchased ICON Capital three years later.

Once at ICON, Martin, who came on board as an executive vice president and director in 1996, was named CFO in May 2003, a position he held until January of this year. Accustomed to wearing many hats, he assumed the title and responsibilities of COO in February 2006, and one year later was named ICON’s president.

In May of this year, the leasing world was saddened to hear the news of Clarke’s sudden passing. To fill the void created by this unexpected loss, Martin took on the roles of chairman and CEO, which added to his already long list of responsibilities.

As with most successful companies, it’s evident that ICON’s accomplishments and Clarke’s leadership are inextricably linked and that he left an indelible mark on the company and its people. When asked how Martin would want his business partner of 15 years to be remembered, Martin said simply and without pause, “Beau had a passion for the business — he was bright and quick — and he loved the leasing business. He was an innovator, a problem solver and a mentor to so many people in the industry.”

Without question, 2006 was a terrific year for ICON with new business volume clocking in at almost 65% over 2005 and net equipment-related assets showing an increase of approximately 23% for the same period. Martin is quick to name a few important factors. Over the past two years, ICON has built a strong acquisition department, which allows the company to maintain the delicate and necessary balance between raising funds and effectively deploying those funds to handle deal flow. 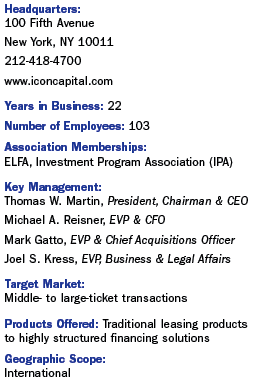 Additionally and of equal importance, ICON cast its sights well beyond U.S. borders by expanding into Canadian and European markets. In the first quarter of 2006, ICON purchased Ontario-based CLEARLINK Capital’s leasing business for approximately $150 million as an investment in ICON’s Fund 11.

And then there’s the opening of ICON’s London office, which has given the company the opportunity to participate in marine and other large-ticket investments. From ICON’s perspective, there’s simply no substitute for a local presence with a grounded employee in the flow and mix of opportunities.

“They are business essential and these days, charterers are asking for renewals well in advance,” Martin says.

He adds enthusiastically, “Bareboat charter terms and shipping rate expectations dovetail nicely with our funds. In addition, there is strong support for these assets in the international lending community and these assets hold their value relative to other depreciating assets.”

On the topic of his vision for the company, Martin says the biggest shift will come from a global emphasis, and sums it up by noting, “It’s interesting, the U.S. economy is still the largest, but it’s a lot less dominant than it once was. We’re seeing more and more opportunities coming from overseas.”

By all accounts, ICON has structured itself organizationally to capitalize on opportunities as they present themselves. “The key to our company’s success is our ability to be nimble. We are a small company and we don’t have 20 committees to deal with. We can make an investment decision very quickly — that has helped us over the years.

“The beauty of our funds is they are structured to provide us with unfettered access to capital to make our equity investments. We can invest in virtually any type of asset, anywhere, at any time. That’s a powerful tool and with that, I can do a lot of different structures.”

So, what excites Martin about the leasing industry? “For me, it’s a personal thing … now my passion is running this company. Mentoring and watching the people you have brought on board is gratifying. And I still enjoy working on deals… I’ll be the first to admit that there’s nothing more fun than closing the big deals. It gets the creative juices going — it always has and always will.”