by Rita E. Garwood October 2020
After working in credit, risk, operations and asset management, Eric McGriff has learned to take a holistic approach to running a business. He believes that equipment finance is a people business, and says authenticity and communication are essential to keeping a team engaged.

Between the ages of five and 17, Eric McGriff was a child actor who appeared in commercials and radio spots. But as he discovered the superficial nature of the industry, he quickly realized that acting was not the right career path for him. Thanks to those childhood experiences, authenticity has always been crucial to McGriff. “If I don’t believe in something, then I don’t say it,” McGriff says. “I only speak to things that I truly believe in, and I think that’s really helped me as a leader.”

In college, McGriff took on a double major of political science and behavioral science without a specific career path in mind. “In my senior year, because of the double major, I just had a really packed final semester. I didn’t even start thinking about a job until my finals were over,” McGriff says.

He recalls visiting the career office of his college and collecting slips that contained leads to potential jobs. “One of the slips was for something called AT&T Credit. I had absolutely no idea what it was or what they did, but I started the interview process. I got the job and 34 years later, here I am in the same industry,” he says. “So it was totally [a] coincidence. But once I started the job, I loved what I was doing.”

McGriff quickly rose through the ranks at AT&T Capital, working his way through roles in credit, operations and asset management. Additionally, he took on leadership roles in operations and portfolio management at Newcourt Credit, CIT, American Express and Key Equipment Finance before transitioning back to credit roles. He has been with TIAA Bank for the last decade and currently serves as SVP, senior divisional credit officer.

“When you serve in a variety of different roles, you realize how interconnected they all are,” says McGriff, who believes that leaders “can’t have blinders on” and must take the entire business into account. “If there’s a problem or an issue on the front end of the business, it’s going to have huge impact on the back end of the business. I try to think holistically,” he says.

At this stage of his career, McGriff derives the most enjoyment from working on strategy. “There have been times in my career where I focused exclusively on credit or exclusively on collections. I think at this point I get the greatest satisfaction from trying to draw the map in terms of where we need to get to, and then incorporating others into that vision and into that drive to get to where we need to be,” McGriff says.

“Eric is very analytical and his ability to interpret data enables his first-rate strategic thinking,” William Carey, senior vice president and general counsel for TIAA Commercial Finance, says. “Many years ago, he was an early adapter of credit scoring software. His leadership in that area, combined with constant refinements based upon fresh data, helped grow a successful business unit over a 15-year period with excellent portfolio metrics. Yet, earlier this year, Eric’s analytical skill set led him to conclude that the same business segment was in a post-mature state, and he advocated an exit from that business. His recommendation was well-reasoned, fact-based and persuasive.”

McGriff says his tendency toward reflection helps him bring ideas to the table, support them with data and communicate why they are the right move. “It’s really enabled me to be effective at introducing ideas and plans to the business and getting the support of both peers and executives to move forward,” he says. “I’m introverted by nature, so I’m not always the most outspoken person. However, when I feel strongly about something then I can become very outspoken and speak definitively.”

“Eric is willing to share his insights in commercial equipment finance with his peers in the industry and other chief credit and risk officers,” Carey says. “He does not hoard information if he thinks it is in the industry’s overall benefit, and he welcomes challenges to his positions. That is a healthy, confident way to become a leader.”

Kevin P. Prykull, CLFP, who recently retired from his role as SVP and credit underwriting executive at PNC Equipment Finance, has worked with McGriff on the ELFA Credit and Collections Committee for many years. He says that McGriff has actively participated in countless forums, committees, roundtables and webinars that benefit the equipment finance industry.

“Eric is a consummate professional, highly engaged, bright, articulate, and offers invaluable insight and perspective into risk management. He possesses obvious leadership skills and remains a trusted subject matter expert within our industry,” Prykull says. “Eric is at the forefront of emerging risk topics and spearheads numerous initiatives and projects within the field. He always stands ready to offer assistance and guidance to each of us in a personal and thoughtful way.”

It’s All About the Team 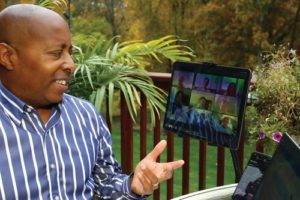 For McGriff, becoming a leader over the course of his career has meant shifting the spotlight from his own efforts to those of his team. “I started in an entry-level role. I was a single contributor and I had early success in what I was doing. That success came from a skill set I developed, and in that sense, it’s all about you,” he says. “You continue to advance and eventually you become a manager. There are still aspects of the job that are about your technical knowledge and your own individual effort, but there’s a transition in your career when it becomes more about the people that you’re leading.

“One of the biggest lessons in your career is when you have that realization and make that switch from saying, ‘It’s all about me,’ to, ‘It’s all about them.’ When that happens, enabling your team to be successful becomes what your success is all about,” McGriff says.

To McGriff, leadership always starts and ends with communication — discovering what the team needs in terms of support and resources. “When you communicate with your team on that level and engage them, they become more engaged,” McGriff says.

When McGriff looks back at the many highlights of his career, one involving employee engagement stands out. Brought in as a consultant to turn around an operation center, McGriff quickly noted the high level of employee dissatisfaction. He knew the business could be turned around, but it would take extensive effort and a cultural transformation.

“When we started that process, we did a climate survey. The results were abysmal,” McGriff says. “People were highly dissatisfied. I remember my first day sitting in a conference room with the team. It was almost a hostile environment.”

McGriff told the staff, “I’m here to help you turn this around. I’m not going to turn it around myself, but I’ll work for you.” The team went on to achieve a dramatic turnaround. A climate survey taken two years later demonstrated significant improvement.

“Seeing people go from being angry and dissatisfied to being happy and satisfied, that’s what I would say is the greatest accomplishment,” McGriff says. “It really was a team accomplishment because it required almost every function in the business to make it happen, from human resources to operations to the salesforce. Everyone was really involved in the transformation.”

McGriff has two primary goals for the equipment finance industry: continuous technological evolution to ward off competitive threats and an ongoing commitment to diversity and inclusion.

“Diversity and inclusion, at least as I envision it, isn’t about, ‘Let’s go out and hire this type of person or that type of person,’ It’s about making sure that you have access to the broadest possible range of people for your organization,” McGriff says. “Sometimes, if you’re just focusing on one way of recruiting, just by its nature it’s not going to be inclusive. Efforts must be made to ensure that companies are getting access to a broad range of candidates. And not just because it’s the morally correct thing to do, but also because — and it’s been proven in studies — it improves the performance of businesses over time.”

Although keeping up with technology is important to McGriff, his advice for aspiring leaders comes back to people. “Never forget people. At its core, equipment finance is a people business and, ultimately, it’s not about you, it’s about them. As a leader, you must spend a substantial portion of your time, effort and energy enabling your team and what they do.”

Looking ahead, McGriff has big aspirations for the future. “I hope to take the knowledge, the experiences that I have, and use them to the fullest capability. I’d like to use them to help a business identify its goals, who it wants to be, what it wants to be a number of years out, and put in place a plan to achieve those goals. I really want to spend more of my time focused on building a business in the future,” he says.

Continuing to improve the industry and mentoring are also high on his to-do list. “I want to continue to help to develop the next generation of leaders. I want to use my lessons and learnings to mentor as others have mentored me so that this becomes an even more robust industry as we move forward.”

One Reply to “Shifting the Spotlight”