According to the ACT Research’s June For-Hire Trucking Index, there was continued and significant improvement in the diffusion index measures tracked. June’s Volume Index rose to 70.4 from 19.3 in April and 50.2 in May, with pricing and productivity at 65.2 and 69.9, respectively. Capacity remained stuck in neutral, hovering near the 50 mark. 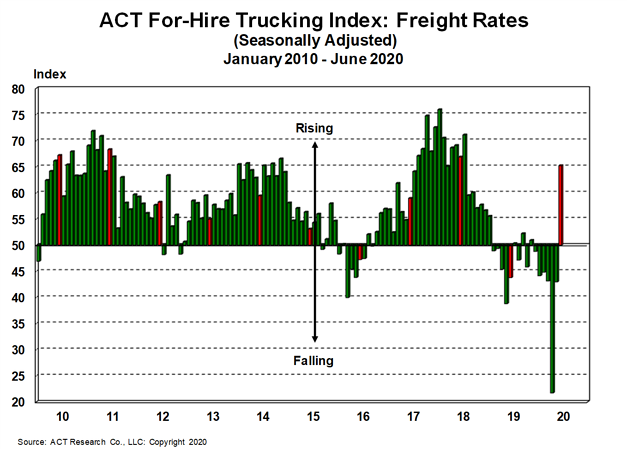 “The survey confirmed much of what we witnessed in rate data over the course of June, as the supply-demand balance tipped in truckers’ favor as the economy reopened,” Kenny Vieth, president and senior analyst for ACT Research, said. “While encouraging, we would note some transitory risks, one being the economic strength in May and June was heavily subsidized by Congress and the Federal Reserve. Additionally, June’s strong rates benefited from parked trucks and laid-off driver capacity.” 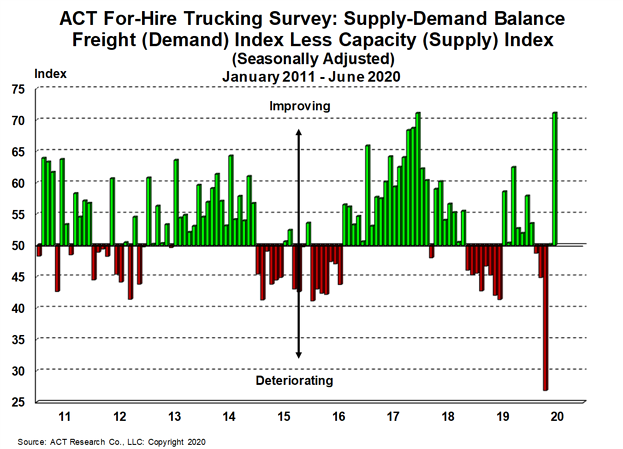 When asked about the overall picture, Vieth said, “Shrinking Class 8 retail sales suggest equipment capacity will continue to tighten, but with sidelined drivers likely returning and lenders extending loans, it may be a while before the market tightens structurally. The road back might be a long one.”

The ACT For-Hire Trucking Index is a monthly survey of for-hire trucking service providers. ACT Research converts responses into diffusion indexes, where the neutral or flat activity level is 50.

As the delta variant threatens to upend many back-to-the-office plans, we face ongoing remote and hybrid working conditions. What types of issues can arise when teams are working in a hybrid manner and how can we use technology to solve... read more

Feeling the Pressure: Examining the Effects of Inflation on Equipment Finance

Despite some setbacks in containing the spread of COVID-19, the U.S. economy has made strides toward a “new normal.” As a result of the rapid shutdown and reopening of the economy, significant inflationary pressures have had and will continue to... read more