“Given the significant challenges we faced in the first half of 2020 arising from the COVID-19 pandemic, I am very pleased with the resiliency of our business and our return to profitability in the third quarter,” Jeffrey A. Hilzinger, president and CEO of Marlin, said. “Due to significantly improving portfolio performance and outlook, coupled with the benefits from the cost reductions we implemented earlier in the year, we generated net income of $2.7 million, or $0.23 per diluted share, and adjusted net income of $3.2 million, or $0.27 per diluted share. Portfolio performance improved throughout the third quarter and has continued into the fourth quarter. Given these trends, the assumptions underlying our loss reserves have been more informed by our actual experience, and our capital position remains strong as we ended the quarter with increased reserve coverage, a total risk-based capital ratio of 22.49%% and book value of $15.23 per share.”

“Third quarter total sourced origination volume of $68.5 million was impacted by a number of factors, including the disruption caused by the restructuring of our front-office operations, reduced customer demand and lower approval rates from tightened underwriting standards,” Hilzinger said. “As we look ahead, we believe that our strong balance sheet and the investments we are making in our digital origination platform put us in a great position to best serve our partners and customers and to take full advantage of the increased demand for small business financing as the economy recovers.”

During 2019 and prior periods, Marlin presented residual income in fee income; however, beginning in Q1/20, Marlin began including residual income in the future cash flows used to assess credit losses and therefore this activity is reflected in the allowance for credit losses. The company’s interest expense as a percent of average total finance receivables was 203 basis points in Q3/20 compared with 222 basis points for the prior quarter and 250 basis points for Q3/19, resulting from lower rates and a shift in mix as higher rate long-term debt pays down.

On an absolute basis, net interest and fee income was $20.5 million for Q3/20 compared with $25 million in the third quarter last year.

Non-interest expense was $14.2 million for Q3/20 compared with $13.5 million in the prior quarter and $17 million in Q3/19. Marlin said the sequential quarter increase was primarily due to an intangible assets impairment charge of $1 million in the third quarter associated with the company’s past acquisition of Fleet Financing Resources (FFR) as well as higher salaries and benefits expense primarily driven by an adjustment in the second quarter to reduce incentive compensation probable payout. This was partially offset by a decrease in general and administrative expenses due to a $1.4 million reduction in the estimated liability for contingent consideration related to the FFR acquisition, according to the company. In addition, Marlin said the year-over-year decrease was primarily due to a $2.4 million reduction in salaries and benefits expense due to lower commission on lower origination volumes and lower incentive compensation driven by company performance along with the aforementioned offsetting amounts related to FFR that only impacted 2020.

For the three months ended Sept. 30, 2020, Marlin recorded a $7.2 million provision for credit losses, which was $0.5 million lower than the $7.7 million provision recognized for the three months ended Sept. 30, 2019, and $11.6 million lower than the $18.8 million recognized in Q2/20. Marlin also said that in Q3/20, its net change in expected impacts from COVID-19 on its portfolio and estimated credit losses was not significant compared with the prior quarters of this year.

As a result of the ongoing impact from COVID-19, through the end of the third quarter, Marlin has completed more than 5,200 loan and lease restructure requests from customers who have been impacted by the pandemic. As of Sept. 30, 2020, the company had $129.9 million total receivables that were part of this program. This equated to 14.3% of total net investment and $117.6 million (13.4%) of equipment finance and $12.2 million (46.1%) of working capital. In the third quarter, Marlin processed new modifications for 406 contracts, or $9.4 million net investment, and extended the modification period for 319 contracts with $16.4 million net investment. 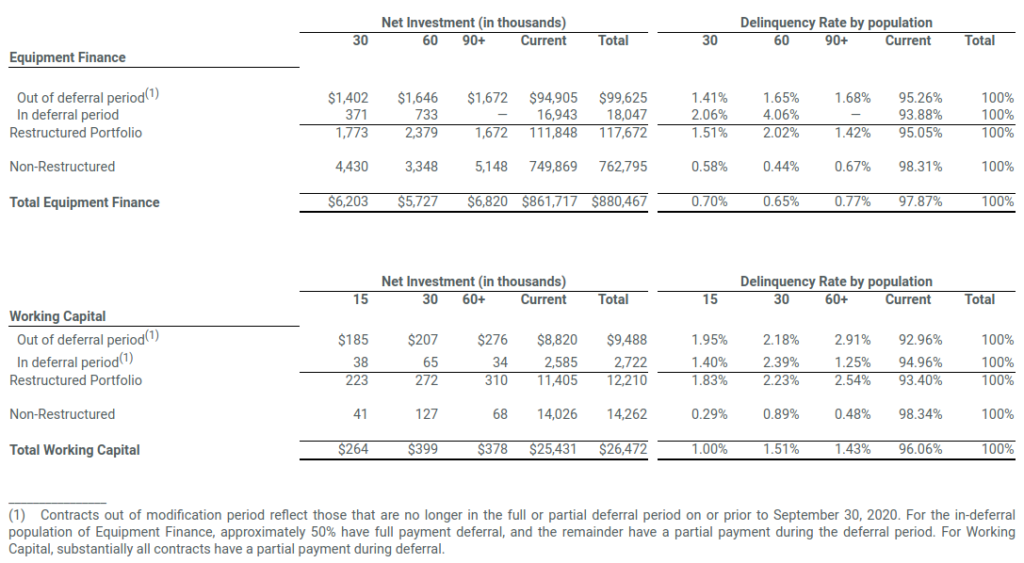 It is a basic human instinct to take care of others when something bad happens. While taking action when we see a stranger drop a dollar bill or leave their cell phone behind is easy enough, we often freeze when... read more