A Changing of the Guard: The Industry’s New Breed of Leaders

In an attempt to discover the new breed of leaders who will carry our industry forward in the coming years, Dexter sat down with five current industry leaders under the age of 50. In a brief Q&A, this article provides insight into their leadership style, how they see themselves differently from traditional business leaders, and what advice influenced them most over their careers.

Have you ever thought about who will succeed you when you are ready to step down or retire? What plans are in place to backfill senior roles throughout your organization for planned or emergency job vacancies? Most businesses have formal processes in place for succession planning. However, as an industry we have no formal succession planning process for advancing our future industry leaders. Who will lead the next generation of equipment leasing and finance professionals? Will diversity and inclusion play a larger role for the future generation of leaders than it has for the current regime? Will technology play a vital role in future leadership?

Pondering these questions, I reached out to a few of my well-connected contacts to gain their assistance in identifying the new breed of leaders who might carry the industry forward in the coming years. Specifically, I was looking for people who hold senior leadership positions in recognizable leasing and finance companies who were the age of 50 or under. Astonishingly, the list was much smaller than I would have predicted. Fewer than a dozen names were recommended by recruiters, consultants and other industry colleagues. I eliminated a few names as their positions didn’t represent senior leadership roles. Of the eight people I contacted, five agreed to participate by answering a short list of questions.

How has your upbringing and education influenced your career?

Gibbons: Growing up, I had an older brother (the oldest), a younger sister (Daddy’s girl), and a younger brother (the baby). Based largely on my self-imposed insecurities as the middle child, I became committed at a very early age to garner attention and affirmation — a burden that later proved to be a blessing. I worked tirelessly to outperform my siblings academically, in sports, and even popularity, which in most cases proved to be futile based on how gifted they all are. Fortunately, the drive that grew inside of me led to an insatiable desire to learn, win, and even help those around me overcome their own challenges — all of which have influenced the trajectory of my career.

Gross: I am from the Midwest and was raised with solid values in a small farming community where hard work was the norm. My parents were very influential in my decision to attend college. In fact, my mother pursued her degree in nursing when I was in middle school. I also participated in collegiate sports, which taught me discipline, commitment and team work — skills that have definitely helped me in my professional career. I hold a degree in finance and accounting, which led to a career in financial services. My first job was in the leasing industry, and it stuck. I began as a financial analyst at a leasing company, which lead to roles of increased responsibility. Eventually, I transitioned into sales.

Lok: I came to the U.S. as an immigrant from the war-torn country of Myanmar when I was six years old, not speaking any English and living in the toughest part of inner-city Boston called the “combat zone,” where our family of six lived in a one-bedroom studio apartment. My father was a banker in his home country but turned restaurant worker in the U.S., while my mother worked in a school cafeteria for minimum wage. I struggled academically early on but was fortunate enough to test into the prestigious Boston Latin School and was later surprised to receive a one-year financial scholarship from Northeastern University, this made me change my mind about skipping college! I thought I might continue to work at my dad’s restaurant, which I had done since the age of 11. My upbringing provided me the strength and desire to succeed and the grit to achieve great things.

Speranza: I’ve learned from an early age to think ahead — to think strategically. My upbringing and education have provided the tools, opportunities, and feedback needed to develop and refine that skill, a process which has continued through a series of progressively influential leadership roles. I’ve also been taught that no matter how much you’ve learned, there’s always more to know and that the strongest performers in any field are also the greatest students of it. Both things have been invaluable throughout my career, especially now as a member of LEAF’s executive leadership team.

Watkins: Firstly, I saw my father completely change careers, whilst he was in his late 40s. In order to succeed, he had to show tremendous dedication and perseverance. The example he set in terms of committing to learn new skills has been a source of inspiration for me. Second, when I was 16, I worked in the summer, in day jobs doing manual work in factories and restaurants. The people I met and stories I heard during that time made an impact and stayed with me. Finally, I was fortunate to spend time at university, living abroad in a very multicultural environment and learning new languages. These experiences have been a great asset in my career to date. 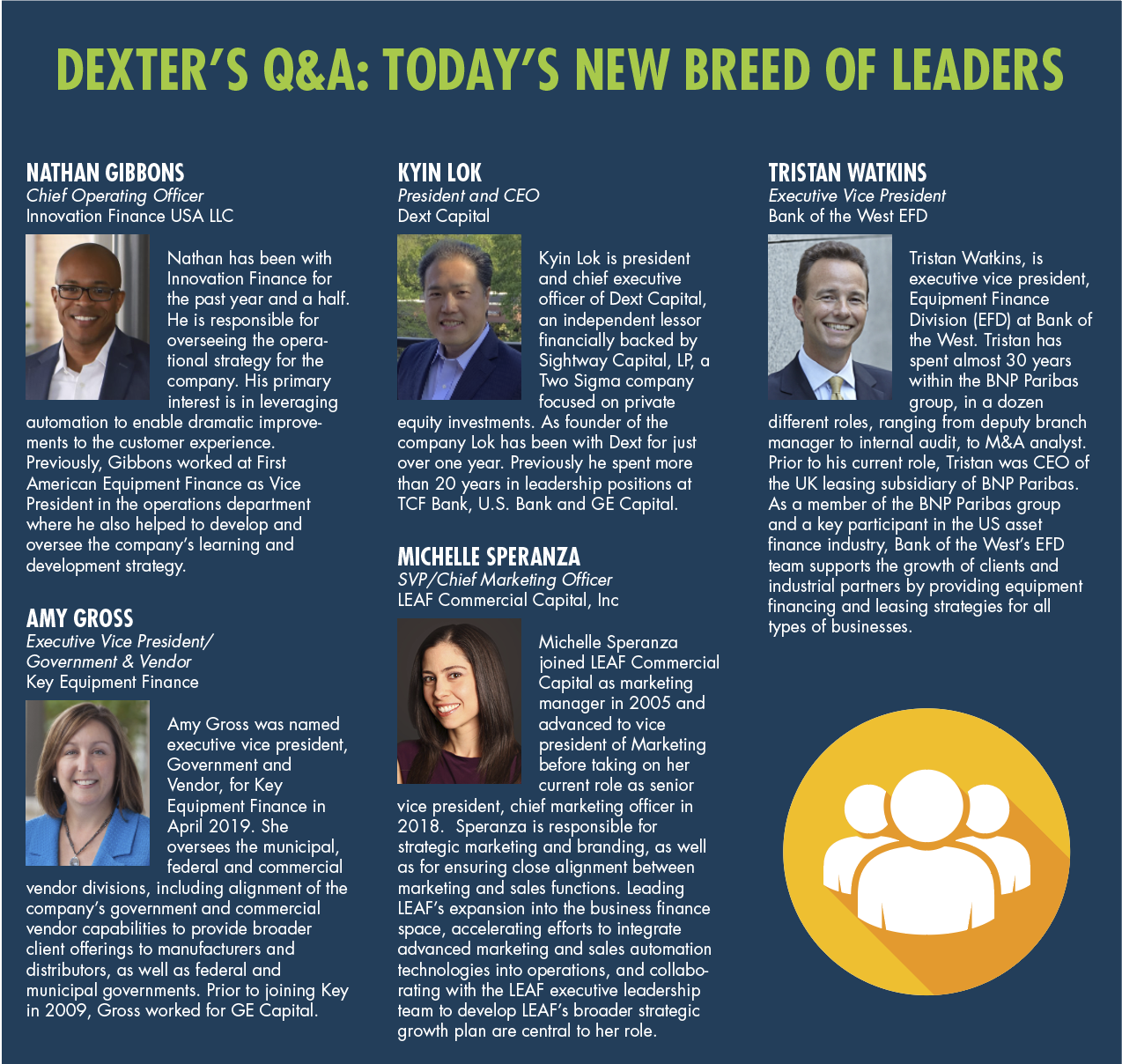 What differentiates you from the generation of leaders who proceeded you?

Gibbons: The things that matter most to people are the same things that mattered hundreds of years ago. What differentiates us is the approach we take to social interaction and problem solving. Put plainly, I believe my generation sees the world through a slightly different lens, which I attribute to the evolution of technology. For better or worse, we’ve found ourselves in possession of resources that simply didn’t exist before, including the ability to access immeasurable amounts of information instantly. This doesn’t necessarily make us better than those who paved the way for us, but if we carefully balance the wisdom and experience of prior generations with the technological possibilities that now exist, our potential to effect positive change may be greater than ever.

Gross: I feel that I have proven that a collaborative and human leadership style can be equally effective as leading by force. I am focused on the next generation with diversity in mind, using problems as opportunities to develop employees. It is important for employees to feel empowered to challenge the status quo while embracing vulnerability grounded in trust. Ideas, innovation and employees flourish in this environment.

Lok: The difference in new leaders today is that we have a strong appreciation that our companies have a moral responsibility to positively impact our communities, partners and employees. Leading teams must include some factor of benefit for your team members whether that be career growth/learnings, community involvement or simply monetary rewards. Employees want to know that what they do each day matters and how. An inclusiveness and openness to collaborate to explore new ways to do things is also fundamental to how new leaders approach problems. Throwing out the old playbook and letting the best ideas float to the surface based on its merits.

Speranza: I wouldn’t say it’s a generational difference necessarily. It’s more of a difference in attitude or maybe even constitution — I just don’t like to give up on a goal. I never have. For me, persistence is the foundation of success. Thriving in a fast-paced environment like LEAF’s requires a great deal of tenacity, constant learning, creative problem solving, and an ability to seamlessly interact at all levels of the company.

Watkins: At 50 I still feel I am very much in touch with and open to new technology, as it has been almost ever-present in my working life, from spreadsheets to e-mail, and now to AI and bots. The second aspect is that I feel my generation is even more at ease in diverse professional environments, with an ability to understand people with very different viewpoints, professional ambitions and life goals.

What is the best piece of career/life advice you have been given?

Gibbons: Two quotes come to mind that I’ll never forget: 1) The best way to positively influence others is to make what’s important to them important to you. 2) Use challenges as opportunities to show what you’re made of.

Gross: The best advice I have been given is that it’s important to have a strong network, and to identify who your cheerleaders and supporters are. In both business and personal life, it’s important to know who will speak up and advocate for you.

Learn how to strike a balance between your career and personal life by relying on the support system around you. A key aspect is realizing and leveraging the strengths of the team around you rather than focusing on opposing forces. While hard work is necessary, success isn’t found in the hours you work, but in the substance of the problems you solve. The importance of working effectively as a team can be much more powerful than one individual.

Lok: I was once told to do what you love. Having a passion for what you do and willingness to put in the work each day is how you become great at what you do instead of just good enough. Having a genuine passion for the team and business is how you inspire people to do more. You can fool people for some time, but over the long term, your team members will want to work for a company and leaders who are authentic and are genuinely excited each day to be the best at what their purpose is whether it’s closing deals or serving customers.

Speranza: I don’t believe she meant it as career advice, but I often think of something that author Margaret Atwood said: “We still think of a powerful man as a born leader and a powerful woman as an anomaly.” In addition to doing all the things a leader does, I’ve been mindful of my own role in legitimizing and normalizing female leadership — getting past male leaders and female leaders to just leaders. Playing a part in working toward that has given my career an extra dimension of meaning.

Watkins: In terms of career learnings, in one my first significant managerial roles, I had a boss who helped me understand that asking for help wasn’t a sign of weakness, it was a sign of strength. I would add that I have always tried to say ‘yes’ professionally to new adventures, geographies and roles. It is a point made often but nonetheless true, careers are no longer a linear succession of ever more important roles. Finally, I would add that for both the life and career side, not taking myself too seriously has stood me in good stead.

It seems that family, upbringing and environment were the most prominent contributors to the career success of this group of young leaders. They view problems and challenges as opportunities and rely on technology to help overcome many obstacles. Each attributes success to teamwork, collaboration, inclusiveness and striking a balance between work life and home life. While careful not to criticize any past generation of leaders, they each take pride in their people leadership skills, their willingness to challenge the status quo, their ability to thrive in fast-paced environments and to absorb immeasurable amounts of information, instantly.

There are certainly additional qualified young leaders guiding equipment leasing and finance companies across the industry. Nonetheless, these five are people to watch as they develop over the coming years. Your feedback and comments are always welcomed at dvandango@gmail.com.•

Get to Know Artificial Intelligence: An Interview with Professor Manjeet Rege