by Stuart P. Papavassiliou June 2008
William G. Farrell Jr., President and CEO of AIG Commercial Equipment Finance, is no stranger to launching equipment leasing companies from the ground up.

In October 2004, the equipment leasing world took notice when insurance giant AIG announced its entrance into the commercial equipment leasing business with the formation of AIG Commercial Equipment Finance (CEF). At its helm, the new venture boasted industry veterans William G. Farrell, Jr. and David B. Fate as its president and executive vice president, respectively. In addition, they were supported by a strong management team, which included Todd Meyer, Dan Fluharty, Joe Thompson, Kirk Phillips, Tim Milazzo, Brian DeRusha and Andy Fletcher. But for those who have kept track of the comings and goings in the leasing industry, the startup team of Farrell and Fate was already well known.

But to begin at the beginning, at least in equipment leasing terms, Farrell recalls his early days at ITT Credit. “I started out as an entry level underwriter in a training type position in equipment finance back in 1980,” Farrell explains. “I worked there for 16 years doing everything from underwriting to marketing and then on to middle- and senior-level management positions … that’s where I learned the industry.”

By 1988, Farrell had moved to Texas and was running the western portion of ITT Industrial Credit’s finance and lease business, which he did until 1995. “ITT was a huge conglomerate,” Farrell remembers, “and it followed a trend prevalent at that time and broke the company up to unlock the embedded shareholder value within each of the business units.”

As ITT poised itself to sell its equipment finance unit, Farrell and Fate thought that they had, as Farrell recalls, “an extremely strong team of people with a pretty good recipe as to how to run an equipment finance business. It was the old adage, the whole was greater than the sum of the parts. We decided to scour the market to see if anyone else agreed with us and would support a de novo startup.”

Interest in a de novo leasing company did come, and it came in the name of Transamerica. Quickly after ITT’s sale to GE, the core team was reassembled and Transamerica Equipment Financial Services was in business. “That business went along fine from 1995 until January of 2004 when Transamerica sold the business to GE. It was a very successful run for us and we didn’t have any complaints except that it ended,” Farrell explains.

For a second time in less than ten years, Farrell found himself looking for a new sponsor and in 2004, he and a small group of professionals began the shop at AIG. Farrell notes, “It was really an exciting time. The second time out was really interesting because we knew what we wanted and needed to run the business. We were very selective in terms of finding a sponsor and with AIG, we knew we had found a company with the financial wherewithal and the vision to support everything we could ever dream of doing.”

At the tender age of three and a half, AIG CEF measures its accomplishments somewhat differently than its older peers in the industry. “Most people talk about their volume or asset levels, however, we’re still in the beginning stages and the highlights for us have been getting all of the infrastructures in place. AIG has been very supportive from this standpoint and we’ve been directed to get the infrastructure in place with that in mind,” Farrell explains.

And as Farrell notes, to do it right takes time. “We needed to get ourselves aligned with AIG and all its functional areas. Of course we were able to draw on our previous experience at Transamerica, however, we were overwhelmed with the size and scope of AIG and the resources they made available,” he adds.

And although he views his group’s assimilation into the whole of AIG as the most significant accomplishment to date, the 2007 increase in net assets and new business results can hardly go unnoticed. Ranked at #36 in this year’s Monitor 100, AIG CEF registered a 93.5% increase in net assets in 2007 as a more than respectable 66.6% increase in new business volume. Farrell maintains the numbers don’t tell the whole story although he admits, “We’ve experienced some strong and consistent growth since our start.” 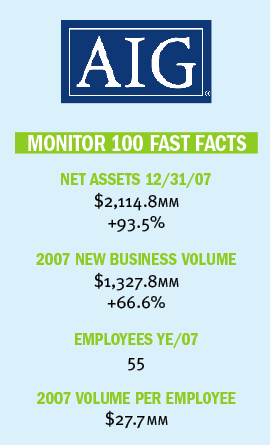 Farrell is also very excited about the number of initiative this team has developed in such a short period of time. “We currently operate two distinct business units, Commercial Equipment Finance, Inc. and Rail Services, Inc.”

CEF has become a multi-faceted business operating in a number of different segments within the equipment lease and finance market. Its direct origination team has representation throughout the U.S.; and its Capital Markets Group handles both the buy and sell side of the business. CEF operates a tax exempt segment and has an established presence in marine, franchise finance and healthcare.

In February 2007, AIG named Gene Henneberry as president and CEO of AIG Rail Services. With detectable enthusiasm, Farrell says, “Gene’s developed a really strong team of people, and Rail Services, Inc. is positioned to handle the ownership and management of most rail car types. They also have the ability to fully service a railroad or shipper’s needs by offering a full range of lease products. These include operating leases, both net and full service, as well as capital leases and leverage leases.” Recently the company launched its own website at www.aigrail.com.

Farrell minces no words when addressing both business units’ approach to the market. “We know all about the ebbs and flows of the equipment leasing business and we don’t want to get caught up in these over-heated, hyperactive markets. We’ve been determined from day one to diversify our businesses. We want to be responsive to the market, but don’t want our actions dictated by the market.”

With regard to current initiatives, Farrell says the main goals for 2008 are building out CEF’s direct marketing team and further establishing Rail Services as a leader in the rail leasing segment. On the more distant horizon, Farrell notes, “We’re really optimistic about the future … we envision AIG CEF and Rail being multi-national businesses consistent with our parent and industry leaders in all the segments being served. Regarding new initiatives, there are no shortages of opportunities; however, we won’t jump in until it is right.”

Farrell, like many of his peers, admits that these are interesting times for the equipment finance industry. “Lately we’ve been hearing comments such as, ‘The people who are going to be successful are the people who have access to capital.’ Well, there are a lot of people with access to capital who aren’t successful.” Farrell views this access to capital as only a part of the story. He explains: “What you need to have is access to capital and a strong sense of responsibility for the capital that you’ve been allocated. Most importantly, you have to have respect for the true value of that capital … especially today.

“A lot of the nontraditional competitors are going to have a lot of problems. As they move out, what you’ll be left with is the equipment leasing industry — the industry that’s always been there.”

On a personal note, Farrell attributes his successes largely to Pam, his wife of 31 years. “I tell everyone that she made the sacrifices and gives me the support I need … the kind of support everyone needs to make it in the leasing business.” And it’s the ever changing dynamics that has kept Farrell actively engaged in the industry for some 28 years.

“It’s always challenging,” he says. “That’s probably why so many of us stay in it so long and it’s really amazing to see the many innovative ways you can approach the same issue. Rarely does a year go by where someone doesn’t come up with some new twist to do things a little better. I think that many of us fell into this business by accident … but we’re glad we did.”