As Bennie and Kester explain it, for Latitude, strength will come not in size, but in its approach to customer service — what Bennie calls a “small company attitude” — which places more importance on solid client relationships than on deal volume.

Until last spring, Bennie served as vice president in charge of Marlin’s Broker Services division. And while it’s no secret that his break with Marlin was less than amicable, today Bennie sees his departure as a blessing in disguise.

“I’d always worked for large leasing companies and I just decided I was at the stage in my career where I wanted to be more involved in the decision making of what I was doing,” he says of forming Latitude. “I was also looking forward to having more flexibility with some of the programs that we could offer and credits we can look at.”

In speaking with him, it’s easy to tell that Bennie is excited by the prospect of running his own shop. A natural entrepreneur, he built Latitude from the ground up in a matter of months. And judging by the ease with which he managed to attract a first-class management team in an equally short time frame, it’s clear that Bennie’s two decades in the leasing industry have won him both the loyalty and respect of his colleagues: Kester being one of them.

By the time Bennie left Marlin, Kester, who previously served as senior vice president and chief credit officer at the company — and was one of its founders — had been out of leasing for nearly five years.

He says forming Latitude with Bennie gave him the opportunity he’d been waiting for to rejoin the industry. “I was looking for the right chance to get back into leasing and when these guys were ready to take a little risk, it seemed like the right time,” Kester explains. “I’ve kept in touch with them, I respect what they do and they were finally ready to go out and do something on their own, so now I’m ready to jump back in.”

According to Latitude’s mission statement, the founders felt that in an industry dominated by large institutions confined by structured policies and complicated financing arrangements, a certain level of freedom was missing. Kester says it’s this emphasis on flexibility that was instrumental in the choice of name for the company.

“The definition of Latitude is ‘freedom from narrow restrictions; freedom of action and opinion.’ With the experience of our management team that is exactly the value that Latitude Equipment Leasing plans on providing to both our customers and employees,” Kester says.

Latitude claims to specialize in financing equipment for vendors and end-users when a more “hands on” approach is required. As Bennie explains it, the company looks to fill the service gap left by large finance companies that use “cookie cutter policies,” which are often inconsistent with the needs of smaller, independent companies. The problem, he says, is that too many larger leasing firms are driven by volume, yield and credit without regard for the actual needs of their customers. 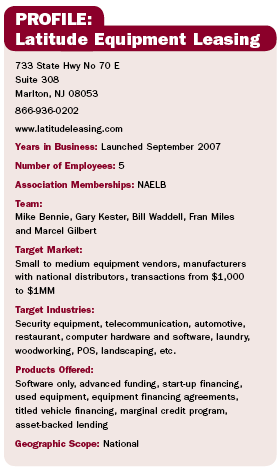 “We feel that we will bring a fresh approach to the marketplace, an approach that larger funders have forgotten,” says Bennie.

In September, Latitude completed its management team with the addition of three new hires — all of them former Marlin employees — and officially opened for business. Joining the company were Bill Waddell, a former vice president and co-founder; Fran Miles, a former senior account executive; and Marcel Gilbert, former vice president of information technology.

“These guys have been building relationships over the last 20 years and they know how to do it,” says Kester, commenting on the new hires. “It’s not just a matter of picking up the phone asking for the decision maker and seeing if you can get somewhere, it’s preparing yourself, making the right phone call and building a relationship.”

Since their formal launch, Bennie says his team has been busy with the “basic stuff” — like getting their IT system online and setting up phones, software and PCs. The company recently went “live” with its informational website — www.latitudeleasing.com — which, among other things, boasts two-hour turnaround on decisions, competitive rates, flexible payment options, and funding within 24 hours. There’s also an online credit application.

Beyond that, the team has been reaching out to lenders and funding sources that will eventually compliment Latitude’s programs and services.

Kester says he’s been pleasantly surprised by the response so far. “The service level of different funding sources out there is outstanding. It’s really impressed me,” he says. “There are a lot of good companies out there that are helping companies like ours.”

Another challenge, adds Bennie, is the company’s lack of name recognition — something he knows will improve with time.

“On the sales side of the equation, as a start-up, your name’s not out in the marketplace beyond some of the press releases and word of mouth,” he says, “while we have the resumes to back that up, you have to earn the trust of your customers.”

The rest of the time has been spent “pounding the phones” in order to generate business. “We’re going to go after a fairly wide variety of industries — we’re not going to restrict the marketplace — our backgrounds are all as a generalists so we’re going to focus on the main niches most lenders go after,” Bennie explains. “We’re not going to overcomplicate things.”

Accordingly, Latitude’s service offerings are broad and include financing for the medical industry, software, used equipment and titled vehicles, with options available for start-ups and marginal credits.

Equally important, says Kester, Latitude will employ a refined sales strategy that only comes with experience. “One thing that’s going to set us apart is we’re not going to take someone that’s a year out of college and have them make 150 phone calls a day and see what sticks,” Kester says. “What you’re going to have is a seasoned leasing veteran who’s going to make 30 calls a day. But they’re going to be much more educated phone calls with a much higher probability of building a relationship, not just getting a deal.”

As the company grows, Bennie says Latitude will capitalize on the cohesiveness of a team that has worked together — in some capacity — for more than a decade.

“We’re looking forward to answering to ourselves as partners to the business that we do here,” he says. “We trust each other’s experience and know-how and we think we have a product that the marketplace is going to be really receptive to.”

Christopher Moraff is the associate editor of the Monitor.