Dexter Van Dango is a pen name for a real person who is a senior executive with more than 25 years of experience in the equipment leasing industry. A self-described portly, middle-aged, graying, balding leasing guy in the twilight of a mediocre career, Van Dango will provide occasional insight from the front lines via Monitor.

monitordaily mystery writer Dexter Van Dango discusses the battle of declining margins coupled with increasing expenses and asks one question: “Where does it end?”

In mid-September I read an article on American Banker about the “Winners and Losers on CIT’s OneWest Deal.” There were some interesting conclusions drawn by the writer. For example, CIT Group CEO John Thain was listed as a winner because the deal represented his comeback after he was forced out as Merrill Lynch CEO in January 2009 after Merrill’s takeover by Bank of America. An interesting loser was Wells Fargo, with the conjecture being that following the $3.4B OneWest acquisition, CIT was less likely to sell itself, as had been rumored for months, with Wells Fargo being the front runner among suitors.

Perhaps the most surprising item among the list was The CIT Compliance Team listed as a loser. Pictured above the following caption was Fed Chair Janet Yellen: “CIT now takes on the status of being a systemically important financial institution. That means far higher regulatory costs, and worries, as Fed Chair Janet Yellen crafts rules to promote stability in the financial markets.”

Imagine what a change this represents for members of the management team at CIT who have been in their saddles the longest. What a stark contrast between the days of rock and roll from the Newcourt acquisition to the Tyco sale and ensuing divestiture. Those days of wild, unbridled, deal-doing are over. Welcome to the world of regulatory oversight, with an extra dose of scrutiny, due to the SIFI designation.

Imagine the increased cost of complying with all the regulations. CIT is not alone in this quandary. All of the bank participants of the leasing and finance industry are facing the same dilemma. All while pricing pressures continue at unsustainable levels.

Not that long ago — before the Great Recession — I remember doing prescreens on deals over the phone with credit people who gave the nod to move forward with the understanding that the underwriting would follow. Those days are gone. We recently lost a strong credit underwriter who was simply fed up with the amount of work required to properly underwrite and document a standard $5 million deal. The pain of adhering to the regulatory requirements just wasn’t worth it. More requirements means more time is required for each transaction. More time means more expense. This added expense is negatively impacting efficiency ratios, making banks less profitable.

Imagine being less efficient and also feeling the pressure to give in to pricing. Reading through the Q2 results for each of the top 100 banks, one can’t help but notice the decline in net interest margin (NIM). Banks are fighting to gain or retain market share and are willing to sacrifice margin to generate more loans and to increase average earning assets. If the bank has a large number of consumer loans or holds a large credit card portfolio, its NIM may be down, but will likely remain significantly higher than banks without these types of higher margin assets. Likewise, banks that hold assets in trusts, savings or investment accounts for their clients show significantly lower NIM, since they are less likely to lend as much as banks without these types of assets. 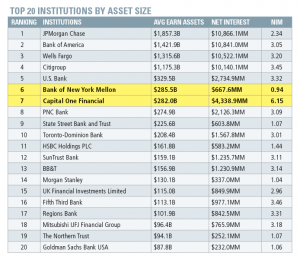 This juxtaposition is clearly evident when comparing Bank of New York Mellon, a large investment company ranking as the 6th largest bank in the country with assets of nearly $337 billion that earned NIM of just 0.94% in the second quarter, against Capital One Financial, one of the nation’s largest credit card issuers and the 7th largest bank with assets of just over $324 billion that is producing second quarter 2014 NIM of 6.15%.

Looking at the NIM for the top 20 banks in the U.S. as reported by Big Reg Data, and eliminating those highlighted outliers whose NIM variance can be attributed to the earlier explanation, one finds an enlightening gap between the advantaged and the disadvantaged.

The decline in NIM has been occurring for an extended period of time. The following graphic, again from Big Red Data, shows the decline in NIM for the top 100 U.S. banks over the past 10 years. It shows the peak in the first quarter of 2010, when many lenders re-entered the market, but only to pursue stable, creditworthy customers — at above market prices. The decline since then has been significant and steady.

Where does it end? Declining margins coupled with increasing expenses don’t make for a good future. We are all being asked to do more with less. Make ends meet while not replacing that underwriter who could no longer take the pressure. Dot the i’s and cross the t’s. Make sure the work is done right and passes muster with the auditors. Continue to invest in technology, relentlessly. For today, data integrity and information security are top of mind with the public. Banks cannot afford another lapse in public trust.

Perhaps most importantly, we need to find ways to enhance the work-life balance. Doing more with less puts undue pressure on our team members. Some won’t be able to take the pressure and will leave. The loss of experienced, capable people can hurt an organization, and certainly impacts morale. Leaders need to find ways to make working life more bearable; make it fun, however possible. Keep in mind: We’re all in this together.

Joe Nachbin’s passion for equipment finance was so strong, he remained dedicated to his work until two hours before he passed away in July 2022, according to his wife, Ruby Nachbin. Attorney and investment banker, Paul Bent, senior managing director... read more