Raising the Bar: While Others Ride the Blockchain Wave, Equipment Finance is Still Wading Offshore

With all the hype about blockchain revolutionizing the way business gets done globally, have you ever stopped to think about whether the equipment leasing and finance industry is ready to dive into this potentially disruptive technology?

With all the hype about blockchain revolutionizing the way business gets done globally, have you ever stopped to think about whether the equipment leasing and finance industry is ready to dive into this potentially disruptive technology? There’s ample evidence of other industries and even governments turning to blockchain and related technologies to solve problems, prevent fraud, improve transparency and realize greater efficiencies. New research also shows most equipment leasing and finance executives agree blockchain is relevant and offers competitive advantages for their businesses — but little actual progress has been made.

Quite simply, blockchain is a digital, distributed ledger for maintaining a permanent record of transactional data. It uses state-of-the-art cryptography to verify data authenticity and functions as a decentralized database that is managed by its members in an accessible network. Initially the technology that powered bitcoin, blockchain on its own has the potential to transform almost every business function from accounting to finance to operations across industries.

One of the most practical applications of blockchain involves supply chain management. Volkswagen is using blockchain to track its battery supply chain from point of origin to the factory floor. Starting late this year, Walmart is mandating that all its suppliers of leafy green vegetables update their data on a blockchain to better track sales in an effort to improve food safety. GE Aviation just developed a supply chain blockchain to monitor and collect data related to the manufacture and life cycle of critical aircraft engine parts. Recently, over 100 of the world’s largest shippers, supply chain providers and 20 governments joined forces with the World Economic Forum and the International Organization for Public-Private Cooperation in a united effort to accelerate the deployment of blockchain in the global supply chain.

Other interesting applications include United Airlines’ recent successful experiment around the reporting and settling of airline ticket sales. De Beers uses blockchain to verify the authenticity of its diamonds as well as to guarantee that they are conflict-free. Governments like Canada and the Netherlands are working on blockchain initiatives to digitally identify travelers, and 44 central banks are experimenting with the technology towards adopting a digital currency.

Looking at our financial services brethren, there’s a lot of excitement around blockchain’s potential to lower costs, improve execution of transactions, increase transparency and reduce a high-volume, paperwork-intensive process. A popular application is in the payments space because blockchain offers a high-security, low-cost way of sending and receiving payments without verification from third parties. For the mortgage industry, transaction times could improve by 25% because putting mortgages on a blockchain simplifies loan approvals by reducing the time and costs associated with a heavily paper-oriented process. Eliminating duplicative paperwork would also reduce mortgage fraud. Sensing similar benefits, the insurance industry joined forces to launch B3i, which is an initiative to explore how blockchain can better service clients through faster, more efficient and secure services.

With all the applications across the finance industry as well as others, what are the most likely use cases and benefits that blockchain specifically offers for the equipment leasing industry?

• Cost Per Use: Real-time data capture leveraging blockchain could ensure accurate billing and cost reduction while increasing trust and transparency for transactions among a variety of participants.

• UCC Filing: Given that today’s UCC search and verification process is cumbersome, a blockchain-based solution could increase speed, accuracy, consistency and transparency in obtaining and releasing security interests. This would drive down costs for participants in the blockchain network.

• Asset Management: Lack of transparency in the usage of equipment can make it difficult to determine the history of an asset. Capturing data with internet of things (IoT) sensors and then storing it on a blockchain in real-time would result in improved asset monitoring and data accuracy across the entire equipment lifecycle.

• Syndication: Currently the syndication process is quite costly and inconsistent as participants use different data sources, methods and formats, all of which drive up expenses, create complexity and result in inefficient processing. Here, a blockchain-enabled solution would provide data transparency, eliminate redundant data validation processes, reduce rework and redocumentation, encourage market standards including legal agreements and ultimately develop trust among participants.

• Funding: Debt issuance is another extremely expensive and inefficient process hampered by manually intensive procedures. These include an over-reliance on spreadsheets to manage data, paper loan documents and duplicate work tasks required because of the different systems used by market participants. While it will vary by instrument type, blockchain will solve problems associated with multiple technology platforms, definitional variances and other processes that make funding inefficient and lengthy. Middlemen such as investment bankers and exchanges will be obviated in a decentralized process as investors seeking specific terms and tenors can more easily find issuing firms. All toted up, blockchain will streamline antiquated processes, reduce costs, increase transaction speed, enhance transparency and keep transactions secure.

• Securitizations: While in an embryonic stage, blockchain-based securitizations offer many of the same benefits explained in the funding use case above: the elimination of unnecessary third-party intermediaries, lower costs, time savings and minimized risk of fraud. The use of smart contracts will enable the blockchain to standardize very complicated pooling and servicing agreements, track performance of the underlying assets and determine the value of the securities in real-time.

• Know Your Customer and Anti-Money Laundering: Current KYC processes around verifying and validating customer information are paper laden, inefficient and repetitive. Blockchain would address onboarding inefficiencies and improve due diligence by providing a single source of customer data with greater accuracy, transparency and immutability of records.

Use cases from other industries demonstrate that blockchain can lower costs, increase efficiencies and improve customer experiences. Are equipment leasing and finance companies ready to embrace this emerging yet potentially transformative technology? That’s what a team of researchers from The Alta Group and Reuben Creative wanted to measure. 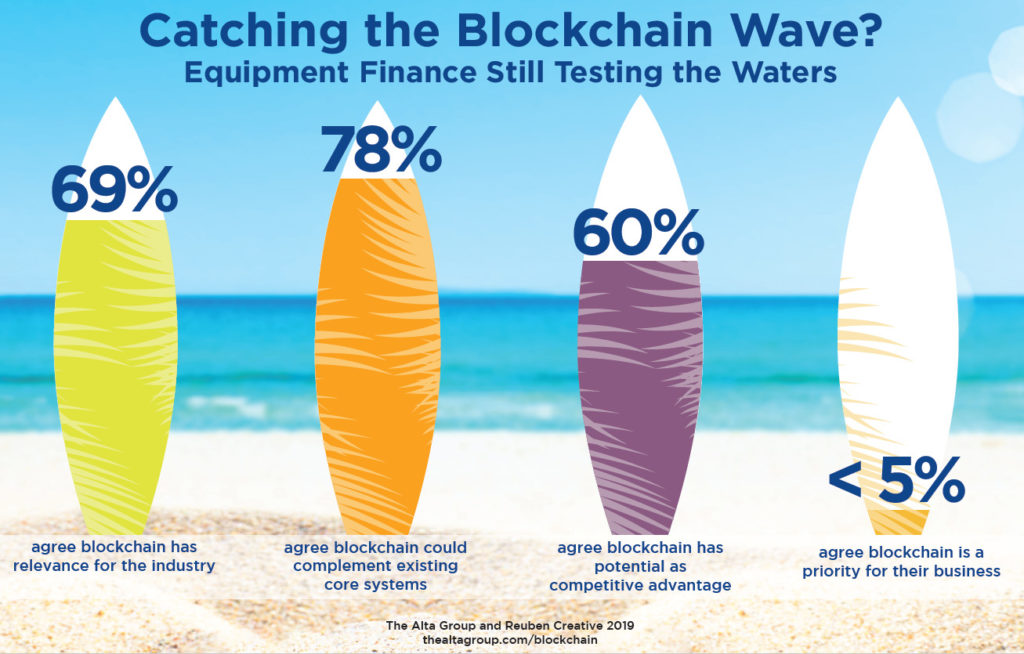 With the support of the Equipment Leasing and Finance Association, we conducted a double-blind survey among the ELFA membership to establish a baseline for the industry’s level of awareness and understanding around blockchain and its potential benefits. The survey targeted equipment lessors, service providers, bankers and other participants. It cut across various demographics of participants based on job title, functional area, company size, geographic focus and ticket size.

Survey participants were asked to rate their level of understanding of blockchain, along with that of their team. They also were asked to provide information regarding their blockchain activities in terms of education, investment and actual steps taken towards adopting blockchain technology. In closing, survey participants were asked about their perceptions regarding blockchain technology, such as its relevance to the equipment leasing and finance industry and their organizations, whether blockchain is overhyped and whether it would complement or replace existing systems.

The survey results were tabulated, analyzed and reported in March. Many findings were encouraging as the majority (68.5%) of survey participants favorably viewed blockchain’s prospects for the industry. Another positive outcome was that 60% of survey participants believed blockchain was a competitive advantage, especially around process efficiencies, lower costs, data security and innovation. One respondent remarked, “Those who don’t buy in will be left behind.” Another commented, “Any new tech-related buzzword that you understand and your competitors don’t is a competitive advantage — at least in the short term.”

The survey also revealed a major disconnect. Even though the majority of participants agreed blockchain was relevant to the industry and would offer a competitive advantage, less than 5% identified blockchain technology as being either critical or a strategic priority for their organizations. One survey participant offered this slightly discouraging yet pragmatic perspective: “Until blockchain becomes a standard with government, banks and the leasing industry, in general, the implementation and value of blockchain is not cost effective.” Survey findings also indicated that only a small percentage of equipment leasing companies expect to make blockchain-related investments in 2019.

Perhaps that captures where we are as an industry and where we’ve been historically — conservative, late adopters of new technology. Only when blockchain becomes a proven and widely used technology will the equipment leasing and finance industry take notice — unless forward-thinking leaders decide to make this a priority. Only when the blockchain conversation shifts from the technology department to the business leadership will lessors implement the technology. So, it seems that the equipment leasing and finance industry, in its inevitable conservatism, may just dip its toes in the blockchain waters for now while our friends outside the industry dive in.

Deborah Reuben of Reuben Creative and Shawn Halladay of The Alta Group contributed to the research cited in this article. For more research findings and recommendations, visit http://thealtagroup.com/blockchain/ •

Behind The Metrics: Closed Cases, Not Just New Filings, Are Key to Spotting Bankruptcy Trends

Bankruptcy filing statistics are important, but they only scratch the surface when it comes to assessing overall trends in the world of distressed businesses. Gregg Morin identifies some of the other metrics that matter and delves into what they’ve shown... read more

Deborah Baker faced a dilemma the summer before she began college. She was all set to work alongside her best friend at Ponderosa Steakhouse when her mother, who worked for AT&T Capital, arranged a summer contracting position for her. Baker... read more